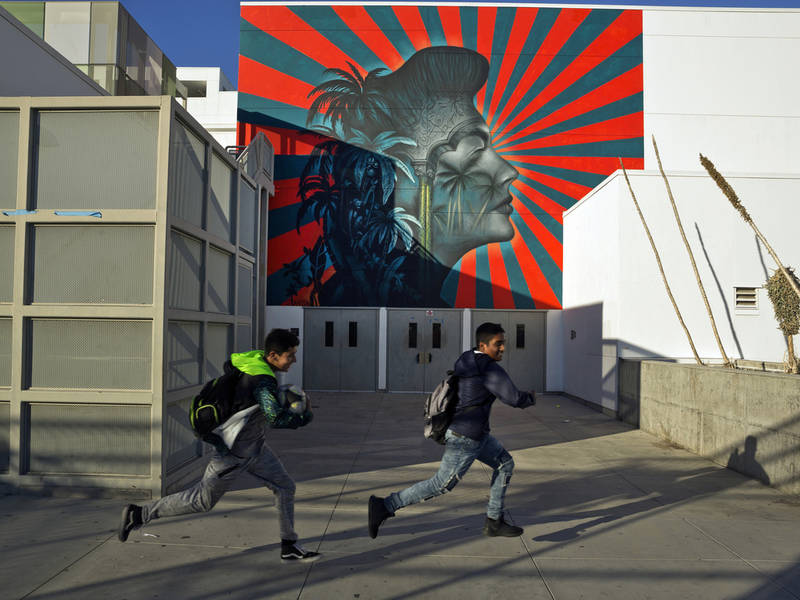 LOS ANGELES, CA — A Koreatown school mural of actress Ava Gardner that has come under fire by critics for what they call similarities to a Japanese imperial battle flag will remain in place for now, the school district announced Monday, reversing an earlier plan to paint over the work.

In an email sent to people with interest in the mural project at Robert F. Kennedy Community Schools, Los Angeles Unified School District operations administrator Eugene Hernandez said that after “extensive input” in recent weeks, “there is a need to have additional conversations.”

“Therefore, we will not be taking immediate action on the mural at this time,” he wrote, adding that a stakeholder meeting will be held after the winter break to revisit the issue.

LAUSD officials said earlier this month they planned to paint over the mural by artist Beau Stanton in response to complaints from a group of Korean activists. They claimed the rays in the background of the mural were reminiscent of the Japanese battle flag, invoking memories of atrocities committed before and during World War II.

Stanton has denied any link between his artwork at the Japanese flag, insisting on key differences such as the number of rays and their size and color.

Over the weekend, artist Shepard Fairey told the Los Angeles Times that if Stanton’s mural was removed, he would insist on the removal of his own outdoor portrait at the same complex depicting its namesake, Robert F. Kennedy. The complex is at the location of the Ambassador Hotel, where Kennedy was fatally shot in 1968.

“I’m proud of that mural,” Fairey said of his own work. “I’d love for that mural to stay, but this is the only leverage I have.”

On Sunday, one of Kennedy’s children voiced support for Stanton and for Fairey’s response, The Times reported.

Fairey said it’s important for the school district to understand that it made a poor decision in succumbing to what it apparently considered to be the path of least resistance. The artist said he wants to create and encourage some counter-resistance.

Fairey’s Kennedy mural is arguably one of the school’s defining visual elements. It is on an outside wall of the entrance to the library, which is built on the footprint of the Ambassador Hotel ballroom where Kennedy gave his last speech, in 1968. Moments later, an assassin fatally shot the presidential candidate in a pantry area next to the kitchen.

“I have talked to a teacher from RFK about where the students stand, and they overwhelmingly want the mural to stay,” Fairey wrote to Garcia. “If Beau’s mural is removed I will reach out to students to have them take part in my mural being painted over as a symbol of the sacrifices that are sometimes necessary to stand up for important principles.”

City News Service; Photo: In this Dec. 13, 2018 file photo, a mural by artist Beau Stanton of actress Ava Gardner is displayed at the Robert F. Kennedy Community Schools complex school in Los Angeles. Artist Shepard Fairey will insist that one of his murals be removed from the Los Angeles school if officials follow through on plans to cover up Stanton’s mural that some community activists find offensive, the Los Angeles Times reported Monday, Dec. 17, 2018. Both murals are in Koreatown at the Robert F. Kennedy Schools complex on the former site of the Ambassador Hotel where Kennedy was fatally shot in 1968. Stanton’s mural depicts actress Ava Gardner against sun rays. Korean activists say it looks like the Japanese imperial battle flag. (AP Photo/Damian Dovarganes, File)