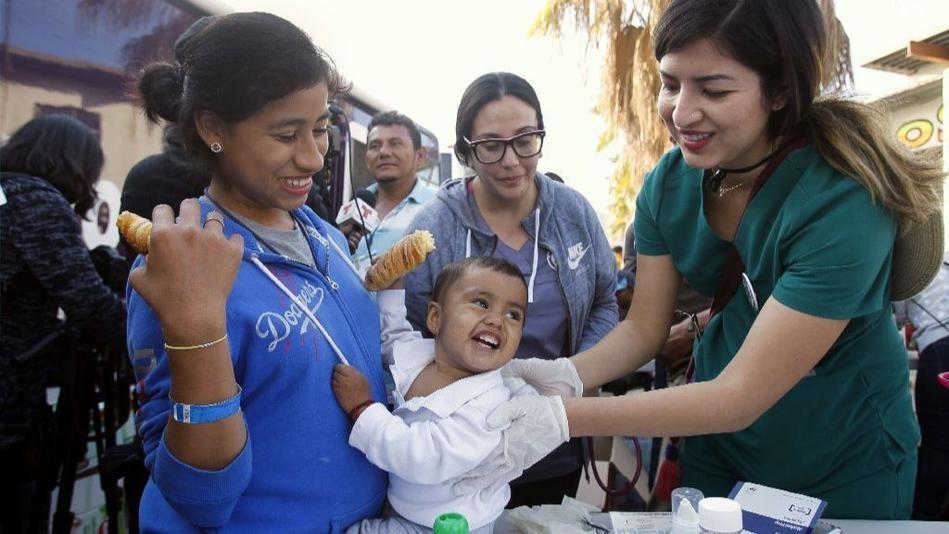 Three-year-old Carlos’ stuffy nose has led to some difficulty breathing in the last week while staying at the El Barretal shelter in Tijuana.

So his mother, 28-year-old Patricia del Carmen Escobar, was relieved that a temporary health clinic was hastily set up Saturday afternoon along the perimeter of the shelter that holds about 3,000 members of a caravan of Central American migrants, most of whom are seeking asylum in the U.S.

Her face brightened upon learning after a consultation that Carlos was in good shape.

“I want to thank them very much,” Escobar said through a Spanish interpreter.

Workers gave Escobar nasal spray and cough medicine to administer to her son and helped Carlos into a donated baby carrier. Escobar soon left with a plastic bag that included bandages, baby formula and diapers.

The clinic was part of a “Faith Caravan” of about 150 Los Angeles-based healthcare professionals, social workers, clergy and union members. The group drove across the border to bring food, supplies and medical care to migrants at El Barretal, an abandoned concert venue turned government shelter, as well as the Primera Iglesia Bautista, a Baptist church in downtown Tijuana.

Sandra Cruz, a registered nurse for the Department of Public Health in Los Angeles County, was one of the volunteers who left home before dawn on buses sponsored by the SEIU public service workers union.

“I didn’t hesitate to sign up,” said Cruz, who was joined by her husband, a social worker. “We know there’s a crisis here on the border, and we wanted to do as much as we can to help.”

By midafternoon, about 10 folding tables were erected on the dirt next to a busy street alongside the shelter. Within moments a long line of migrants had formed.

Osbin Arnoldo Herreria was one of the first in the queue. The 30-year-old from Rio Saina, Honduras, said he has been suffering for days from painful hemorrhoids and was hoping to receive medication.

“I’m a painter and a carpenter,” Herreria said. “I’m worried for my family” in Honduras — a wife and two small children. Asked whether he regretted coming north, Herreria paused and said through an interpreter, “If the caravan goes back to Honduras, I think I will go.”

A few feet away from the tables, 24-year-old Marla Mendendez Lopez waited to get Pampers for her toddler, Arcy. She said she left because of gang violence in her hometown, which she did not want to name.

A single mother, Lopez traveled with her sister from Honduras as part of the caravan. At first they stopped at the Benito Juarez Sports Center in downtown Tijuana, but heavy rains two weeks ago — along with overcrowding — led to unsanitary conditions that prompted local officials to close down the shelter that was operating there.

“We were lying right next to the street,” Lopez said through an interpreter. “It’s better here. It’s cleaner.” She said she’d prefer to go to the United States but is afraid potential problems with her paperwork could get her sent back to Honduras, so she thinks she will try to stay permanently in Tijuana.

Not far away, a migrant had a fresh bandage applied to an open wound on his right ankle. Another held hands with a clergyman in prayer.

“I’m lucky to be a U.S. citizen, and I wanted to come here to make a difference,” said Roxette Villegas, a registered nurse with L.A. County.

About 18 miles away at the Baptist church, social workers and volunteers handed out supplies such as first aid kits, sleeping bags, bottled water, canned goods, toys and baby wipes.

“Our saying is ‘learn, earn and return,’” said Santana, who lives in San Diego. “It means you learn as you grow up and make a living. And as you do that, you should give back to the community.”

The Baptist church has a large denomination of Haitian immigrants, who helped unload the bags of food.

“When we came here, some other people helped us,” said Amos Carrier, the church’s associate pastor who came to Tijuana two years ago via Haiti, Ecuador and Brazil. “And this is a way to give thanks, by helping others.”

Although precise numbers are hard to come by, at the caravan’s peak about 6,000 migrants had arrived in Tijuana.

It’s been estimated about 300 migrants have been deported and around 700 have signed up with Mexican authorities for “voluntary repatriation” to go back to their home countries. Many are waiting to apply for asylum in the United States.

Bishop John H. Taylor of the six-county Episcopal Diocese of Los Angeles, who was helping distribute supplies, said he agrees with those who say every country needs secure borders.

“But,” he said, “no country can have secure borders without a humane, rational immigration system…. We need to get everyone a hearing that the law enables them to get. If the government wanted to have 300 asylum hearings a day, it could. The pace now as we understand it is between 50 and 100, depending on who you listen to.”

As Escobar, 3-year-old Carlos’ mother, left the health clinic, she managed a smile.

“I am grateful,” she said. “It’s not often that people always give you a free consult with medications.”


Former President George H.W. Bush’s casket will be taken by train later this week to the city of College Station, home to Bush’s presidential library at Texas A&M University, where Bush will be buried. The locomotive bears the number “4141” in honor of the 41st president.

Former President George H.W. Bush’s casket will be taken by train later this week to the city of College Station, home to Bush’s presidential library at Texas A&M University, where Bush will be buried. The locomotive bears the number “4141” in honor of the 41st president.


Mudslide and flooding fears intensify as storm rolls across fire-scarred regions of California.

Mudslide and flooding fears intensify as storm rolls across fire-scarred regions of California.


Authorities said the motive behind the mass shooting at the Borderline Bar and Grill in Thousand Oaks remains unknown.

Authorities said the motive behind the mass shooting at the Borderline Bar and Grill in Thousand Oaks remains unknown.