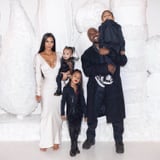 North West may only be 5 years old, but she has a passion for makeup. If her tutorials with mom Kim Kardashian-West didn’t give it away, the backstory behind her Christmas party look definitely will. Over the holidays, the Kardashian-Jenner family threw an unforgettable Christmas party – with more fake snow than Southern California has ever seen – but it’s West’s makeup that caused a ruckus on the internet.

After Kardashian-West posted a series of adorable family photos on social media, fans were quick to call out her oldest child’s makeup look. Some praised her for her confident poses and larger-than-life personality, but others had some things to say about the 5-year-old’s lip color. "Love everything minus North’s lipstick please let her be a child," one person wrote. "Beautiful Family. My two year old asks to wear lipstick every day. We indulge her and tell her she’s pretty. Stop making a big deal of nothing," another added.

While the decision to let her daughter wear red lipstick does appear to have the internet divided, Kardashian-West chimed in on Twitter to explain the situation. Not only did her daughter pick out the lipstick herself for the "special occasion," the mom-of-three said, "it might just be a new Classic Red Lip I have launch VERY soon." Read on to see the family’s sweet Christmas photos and more about the red lipstick.

Kim Kardashian Reacted to 9 Things Anyone Obsessed With Makeup Understands, and It’ll Have You Saying, "Same"