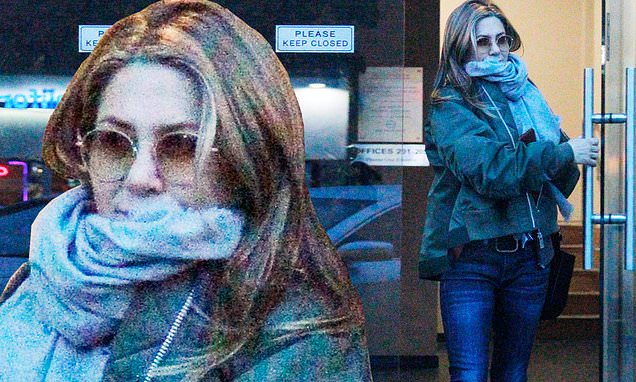 Jennifer Aniston arrived back in Los Angeles just in time for the Golden Globes.

The 49-year-old Friends star was spotted leaving a skin care clinic ahead of the big night.

The actress bundled up against the chilly weather as she left My Secret Skincare, though it was nothing compared to the freezing temperatures she encountered during her recent Wyoming vacation.

Bundle up! Jennifer Aniston, 49, was spotted leaving a skin care clinic in Los Angeles ahead of the Golden Globes

The 5ft5in Horrible Bosses star was dressed casually in an olive green jacket with a chic scarf wrapped around her throat.

She wore a pair of dark blue jeans and brightened up the otherwise somber outfit with a pair of white tennis shoes.

Jennifer’s brunette locks were slightly tousled and hung down over her shoulders.

Despite the overcast weather, she wore a large pair of round-framed sunglasses.

Keeping it casual! The 5ft5in Horrible Bosses star was dressed casually in an olive green jacket with a chic scarf wrapped around her throat

The iconic TV star recently vacationed at Wyoming’s Jackson Hole, where she spent time with other actors and celebrities during her stay.

She went skiing and hung out with friends Jimmy Kimmel and Jason Bateman, as well as their families, according to E! News.

During her Wyoming vacation she also ran into a fellow Netflix star, Sandra Bullock, 54, who stars in the popular post-apocalyptic thriller Bird Box.

The two actresses danced the night away on New Year’s Eve.

Reunion: Jennifer with her Friends co-star, Courteney Cox, 54, at the Dumplin’ premiere in December

The Dumplin’ star has a big year ahead of her.

She’ll be reuniting with her Just Go With It co-star Adam Sandler in the Netflix original comedy Murder Mystery.

She’ll also be playing the first lesbian President of the United States in First Ladies, with comedian Tig Notaro playing her wife.

The Cake star will change things up when she shows off her dramatic chops for Apple’s Top Of The Morning, a drama about a morning show co-starring Reese Witherspoon and Steve Carell. The show marks the first time she has played a lead role in a series since Friends.

Awards prep: Jennifer arrived in LA just in time for the Golden Globes; shown at the 2015 ceremony in Los Angeles