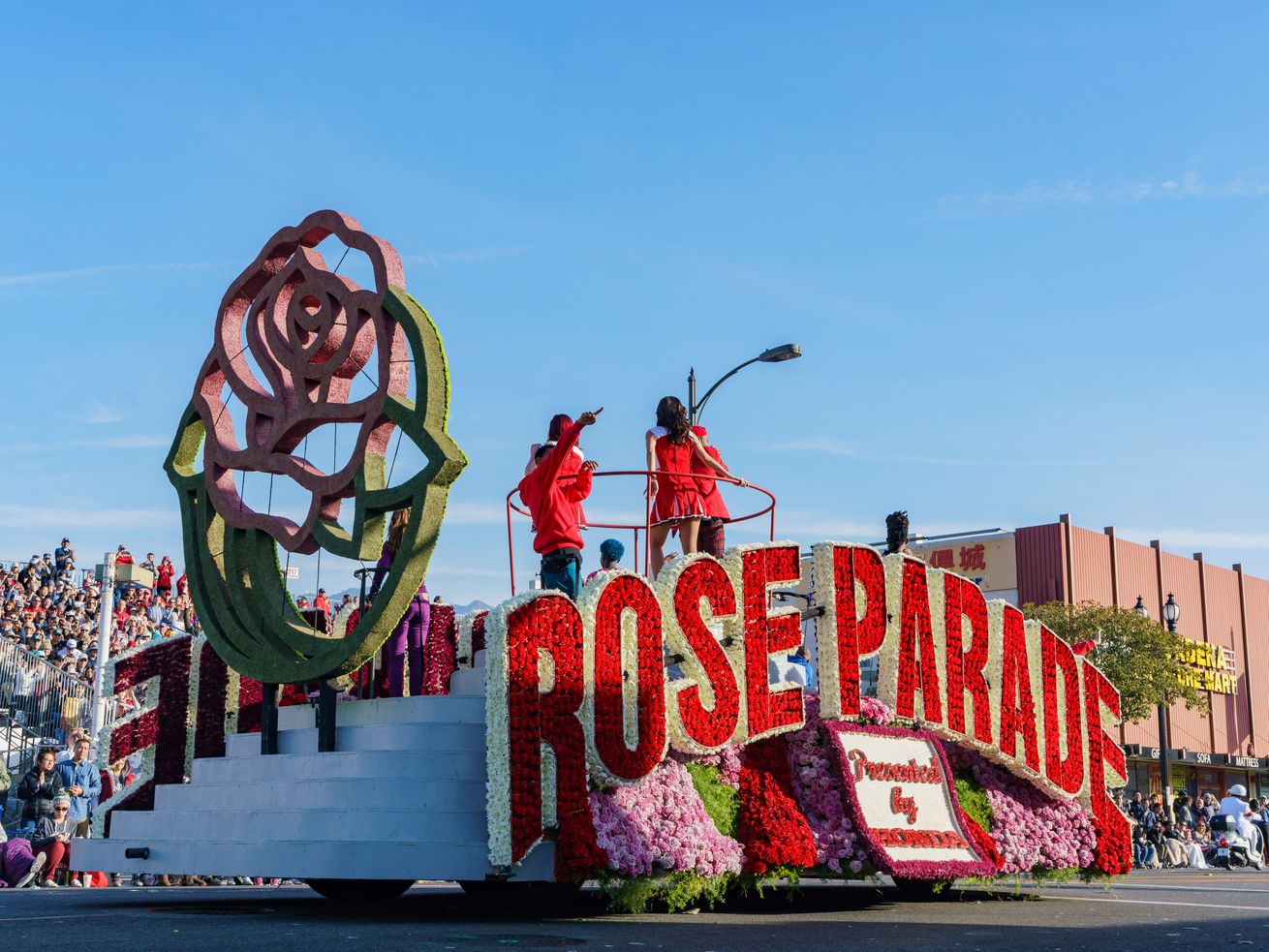 Everything you need to know about this year’s parade

Hundreds of thousands of spectators will line the streets of Pasadena Tuesday to watch the whimsical floats, marching bands, and equestrian units of the famous Rose Parade.

The 130th Rose Parade starts at 8 a.m., when the temperature is expected to be a chilly 48 degrees with just a 4 percent chance of rain.

Those clear skies are part of the reason for the parade. The Valley Hunt Club wanted to show off Southern California’s sunny climate when it founded the parade in 1890:

“In New York, people are buried in snow,” member Charles Holder proclaimed at a club meeting, according to the Tournament of Roses. “Here our flowers are blooming and our oranges are about to bear. Let’s hold a festival to tell the world about our paradise.”

This year’s parade theme is “The Melody of Life,” and floats will be decorated with a wide variety of instruments musical motifs. Appropriately, this year’s grand marshal is Grammy-Award-winner Chaka Khan, who will also perform in an “opening spectacular” at the start of the parade.

Below, is everything else you need to know about the event.

Most of the 5.5-mile parade route runs east along Colorado Boulevard, though the parade kicks off at the intersection of Green Street and Orange Grove Boulevard. At Sierra Madre Boulevard, the parade turns north and finishes off at Villa Street.

How to get there

If you’re not staying in Pasadena and walking isn’t an option, taking public transit is a great way to get to the parade.

Take the Gold Line light rail, which links Union Station in Downtown Los Angeles to Pasadena. The train will run all night on New Year’s Eve, with arrivals every 20 minutes until 5 a.m., at which time they’ll start running on enhanced service schedules to accommodate extra riders.

If you must drive, get ready to spend a lot of time looking for a place to leave your car. Parking is not allowed on the parade route itself, but street parking nearby may be available and there are plenty of first-come, first-served parking lots near the route.

Life’s candy and the sun’s a ball of butter! #RoseParade

For the very best views of the parade, as well as a slightly more comfortable viewing experience, the bleacher seating set up along the parade route can’t be beat—unless you’re lucky enough to have access to a rooftop or upper-level window facing Colorado Boulevard.

Tickets for grandstand seats can be purchased from Sharp Seating Company, which has been constructing viewing platforms for the parade for more than 85 years.

They’re not cheap, though; available tickets start at $65, but few other options exist if you’d like to avoid shoving through crowds on the street for an up-close view of the action.

Diehard Rose Parade viewers typically camp out overnight to ensure the best views possible from the ground level. This year, the city of Pasadena is allowing parade-watchers to stake out positions on the sidewalk starting at noon on December 31. At 11 p.m., the real territory grab will start, when spectators are permitted to move out to the “honor line” beyond the curb.

The parade is definitely better in person, but watching from home is certainly one way to avoid the crowds. This year, ABC, NBC, KTLA, and others will all be broadcasting the festivities. (Polarizing commentators Cord and Tish will once again be covering the parade for Funny or Die.)

The Rose Parade brings with it a plethora of road closures, limiting access to much of Pasadena, but there are a few big street shutdowns in particular to look out for.

The closures will begin at 10 p.m. on December 31, at which point most of the parade route and the side streets around it will be closed off to drivers. Several large intersections along Colorado Boulevard will remain open until 6 a.m. Monday to allow north-south traffic to pass through on New Year’s Eve.

These streets will remain closed until 2 p.m.

Getting a closer look at those floats

The Rose Parade’s carefully decorated floats take months to prepare, and thousands of volunteer hours go into building the “self-built” floats produced by the cities of Burbank, South Pasadena, Downey, and others.

To examine the floats when they’re stationary, head to the end of the parade route, where they’ll be parked along Sierra Madre and Washington boulevards. Viewing hours are between 1 and 5 p.m. January 1 and 9 a.m. to 5 p.m. January 2. Admission costs $15, and advance tickets are available through Sharp Seating Company.