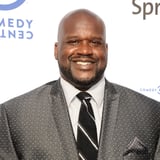 Shaquille O’Neal isn’t bald anymore, according to a video he posted on Instagram. The hilarious former NBA player made a video joking around with barber Chuck Taylor.

First, Taylor shaves the center part of O’Neal’s head and leaves the rest of his hair, prompting the basketball legend to say, "Bro, you gotta fix that." Next, Taylor spreads a thick paste on O’Neal’s head and then reveals a strawberry blond curly wig that made him one happy customer. As he tugged at the wig, he quickly discovered it didn’t come off.

We think he looks good either way, but judge for yourself in the video above.