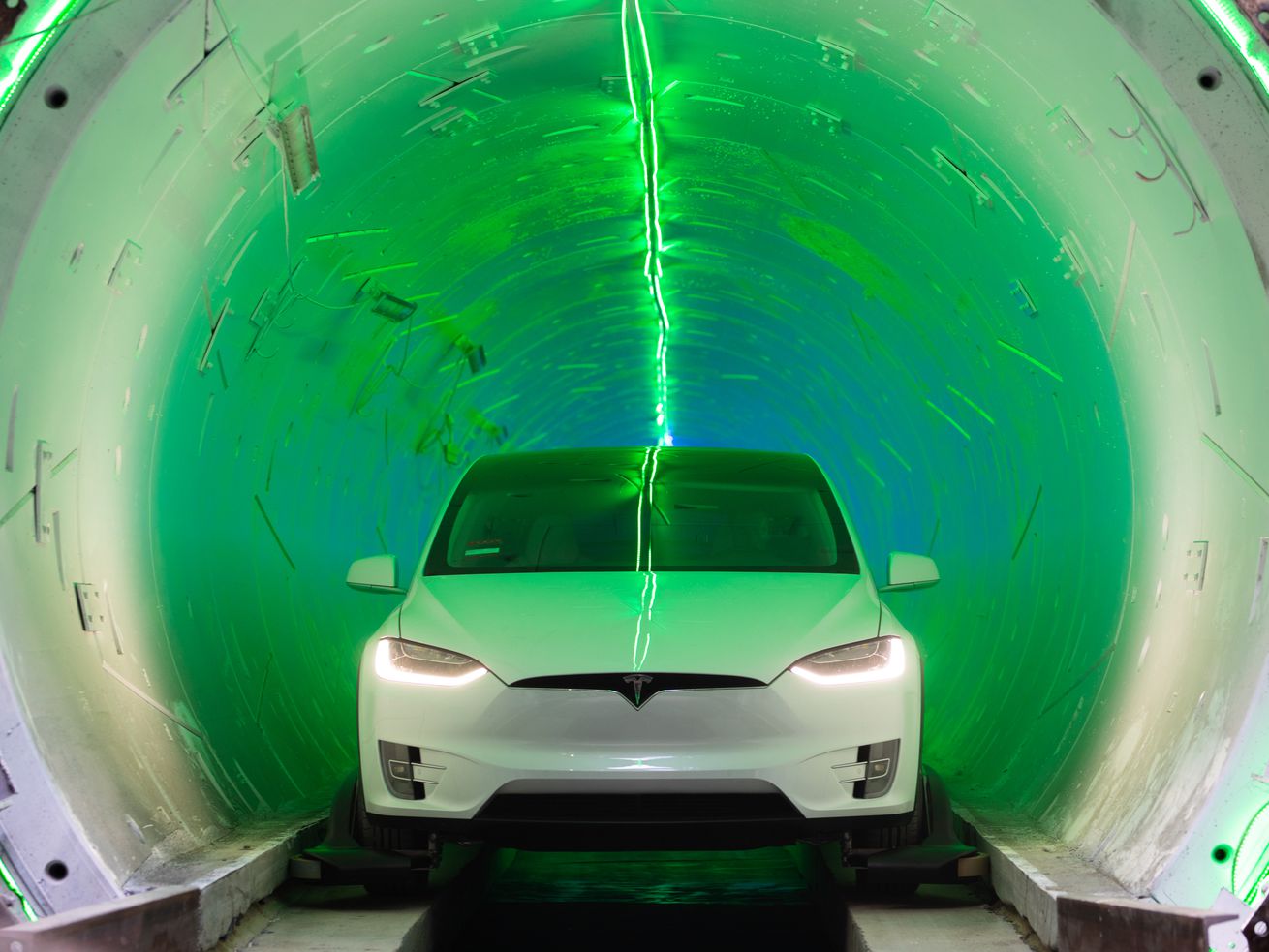 Outside a low-slung industrial building near Hawthorne Municipal Airport, a Tesla Model X navigates into a parking lot and onto a large steel platform. In about 30 seconds, the car is lowered underground, the entrance of a small glowing tunnel rising like a planet over the electric SUV’s navigation system.

The driver accelerates into the narrow tunnel, and the vehicle reaches a top speed of 44 mph. The experience is bumpy and jarring, like four-wheeling in a Jeep on a gravel road.

“That bumpiness will definitely not be there down the road—it will be smooth as glass,” Elon Musk said Tuesday evening, saying the team ran out of time. “We had some issues with the paving machine not paving smoothly.”

The Boring Company, a transportation company owned by the Tesla and SpaceX founder, opened its 6,000-foot tunnel in Hawthorne to the public tonight with a splashy reception for celebrities like Grimes, Jared Leto, and Kendrick Lamar, along with donors and a bevy of journalists. They were among the first to ride in “Loop,” the transportation system that Musk wants to build across Los Angeles, starting with a short route to Dodger Stadium from either East Hollywood or Los Feliz.

About two years after Musk publicly declared on Twitter that he would dig a tunnel to relieve traffic congestion in cities, the 1.14-mile proof-of-concept tunnel has been completed at a cost of $10 million.

The tunnel itself—painted white and installed with lighting that changes colors—as well as the spectacle surrounding the tunnel’s opening, was not unlike the opening of a new ride at Disneyland.

But as far as solving traffic problems, Musk’s tunnel has its skeptics.

“There’s demonstrated evidence that one of the only things that can manage congestion is by using pricing,” says Madeline Brozen, a transportation planner and spokesperson for UCLA’s Institute of Transportation Studies. “If not the only thing.”

Earlier this month, Metro CEO Phil Washington floated the idea to use congestion pricing to pay for free transit for Los Angeles, where drivers would be charged to use the roads in certain parts of the city in an effort to reduce traffic and emissions.

Musk was skeptical of the idea of induced demand.

“I think it’s a red herring,” he said. “No matter how much demand there is, you can satisfy it with a network of 3D tunnels… If you have 20, 30, 40 tunnels, eventually you run out of people to use them.”

Absent from Tuesday’s demonstration were the pods Musk had previously said would carry up to 16 passengers at once. The Boring Company had described the pods as part of its Dugout Loop concept, and, in March, Musk said they were a priority for the company.

Musk said tonight that shared vehicles for pedestrians would carry “four to five passengers”—the same number of people that fit in a Model X—at a cost of $1 to each passenger.

Using modified Model Xs that drive through the Loop is a departure from the Boring Company’s earlier descriptions of the tunnel, which showed vehicles being loaded onto an electric-powered skate that was propelled down a railway.

“Previously we were going on an electric skate, and the skate would carry the car, but that’s a more complex thing,” Musk said.

Much like the way a vehicle’s wheels are guided through a car wash, the front wheels of the customized Model Xs are outfitted with retractable hardware Musk called “tracking wheels” that hold the car in place as it travels along a paved track under its own power at speeds of up to 150 mph.

“By effectively converting the car into a train… you’re passively safe,” said Musk.

Steve Davis, product lead for the Boring Company, called Loop an underground highway, but with the benefits of a train.

The vehicles in the Loop system will eventually use Tesla’s automated mode called Autopilot to accelerate, brake, and travel at a safe distance from other vehicles.

“This is in no way limited to Tesla vehicles,” Musk noted. But to use the tunnel, vehicles would have to install the tracking wheels, which would add $200 to $300 to the cost to the car, and the car would have to be both autonomous and electric.

Asked for more detail about how people who didn’t have cars could use the system, Musk reiterated that vehicles for pedestrians would be prioritized.

“We want to make sure we take care of pedestrians and cyclists.” He was asked if the vehicles might have bike racks. “Yeah, sure,” he said.

Previous images had shown vehicles with people walking their bikes onto the larger-capacity pods in the same way cyclists would use a subway.

The Boring Company’s tunnel is only 12 feet in diameter—much smaller than other transit tunnels—meaning vehicles can only use the tunnel one at a time.

Boring Company provided estimates that 4,000 cars will be able to use a tunnel per hour. Comparatively, on-street transit like light rail or buses traveling in dedicated lanes can move 10,000 to 25,000 people per hour, according to the National Association of City Transportation Officials.

Musk’s plan would mean digging many more tunnels to deliver drivers more directly to their destinations—and installing many more elevators like the two already installed in Hawthorne.

“We can add a lot of elevators,” he said. “The Empire State [Building] is 100 stories tall, but it’s just serviced with elevators.”

At some locations, he noted that 10 to 20 more elevators would be needed “so we’re not dumping too much traffic onto the existing roadways.” However, “where there’s enough room you can have a spiral ramp like a parking garage.”

Musk also disclosed a larger vision for how local Loop systems would integrate with Hyperloop, another tunnel-based transportation system he’s envisioned. Space X sponsors an annual hyperloop competition where teams compete to propel pods in a vacuum tube on a property adjacent to the Boring Company tunnel entrance.

Musk said that Chicago will be the first to build a Loop—at a cost of $1 billion for the 18-mile project to O’Hare Airport—and the Boring Company has “begun building” a hyperloop from Washington D.C. to Baltimore. He also reiterated that the Boring Company is open to creating not just transportation tunnels, but also tunnels for utilities and water.

Experts have said that the Boring Company’s tunneling technology could hold potential for cities.

“If his tunneling costs are real, that would provide a staggering benefit for subway transit. And we need more transit tunnels in our cities badly as an alternative to street traffic and to expand overall capacity,” said Ethan Elkind a transportation scholar who directs the climate program at the Center for Law, Energy and the Environment at UC Berkeley Law. “If it works, transit agencies may want a piece in some way.”

Guests arriving at the Boring Company event this evening walked past a wall of Musk’s tweets, gawking at tunnel-boring machines illuminated like Christmas decor, to access the entrance to the tunnel, marked “Rides.”

A five-story structure of grey bricks made to look like a medieval tower, complete with a man dressed up as a knight, were fabricated from the dirt excavated from the tunnel, according to Boring Company representatives.

After Musk gave a presentation while standing before the tunnel entrance, dramatically lit from the interior, several hundred people lined up for rides, some waiting more than an hour.

“I really think this is incredibly profound, and I hope that I’m coming across,” said Musk.