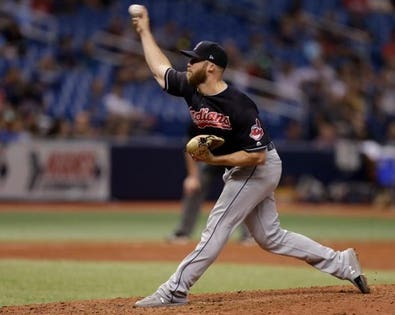 The Los Angeles Angels haven’t had a bonafide closer for years, but Sunday they moved to rectify that problem by adding free agent Cody Allen, most recently the backbone of the bullpen for the Cleveland Indians.

Allen, who had 149 saves for the Indians – 147 of them during the last five seasons – came cheap: A one-year deal guaranteeing him $8.5 million with $2 million more in performance bonuses based on games finished.

With pitchers and catchers for most teams reporting on Feb. 13, there are still 46 relievers remaining on the free-agent market.

At the top of the list is Craig Kimbrel, the closer for the defending World Series-winning Boston Red Sox, who saved 42 games in 47 opportunities, and went into the offseason seeking a six-year deal.

The Red Sox are on the wrong side of the luxury tax threshold and have shown no interest in bringing Kimbrel back for that kind of length or projected money.

Perhaps as the days dwindle toward spring training both sides will change their negotiating position. The Red Sox already have lost fireballer Joe Kelly to the Los Angeles Dodgers for three years, $25 million with a fourth-year $12 million club option that includes a $4 million buyout.

Other than Kimbrel, all of the top flight closers are already off the market.

The Angels went last season with a bevy of underlings in the final inning: Blake Parker, Cam Bedrosian, Justin Anderson and Jim Johnson, Parker leading the team with 14 saves. He’s since signed with the Minnesota Twins.

The Angels blew 26 opportunities and recorded 35 saves overall, 26th worst among Major League Baseball’s 30 teams. Since they finished 80-82 the last two seasons, the dearth of a bonafide closer since Huston Street went down with a variety of injuries was the difference between mediocrity and a solid run at the American League West. It also helped cost veteran manager Mike Scioscia his job. He was replaced by Brad Ausmus.

“Cody has shown a history of durability and a history of being a well-above average reliever,” Angels general manager Billy Eppler said Monday during a conference call and reported by MLB.com. “Obviously, he has a history of closing big games in big spots. We anticipate him as our closer, and it’s something we talked to him about during the negotiation process. We wanted to add that veteran presence and playoff experience to a relatively young and inexperienced group.”

Allen saved 32 games and had a 2.51 ERA for the 2016 Indians team that lost the World Series on the final pitch of Game 7 to the Chicago Cubs. Last season, he slumped to 27 saves and a career worst 4.70 ERA. His 67 innings, though, was right on par with his career norm.

It’s no surprise that he was the last of the bonafide closers on the free-agent market to go.

During the second consecutive slow moving free-agent offseason, all the viable relievers now pretty well have been snapped up:

Aside from Allen, David Robertson went to the Philadelphia Yankees, Jeurys Familia back to the New York Mets, Joakim Soria to the Oakland A’s, and Andrew Miller to the St. Louis Cardinals.

The Red Sox aren’t the only team at this moment that needs a closer, thus the market should heat up. Overall, there are still about 200 players out there.

The Angels, though, now seem done for the offseason.

They had already gone signed first baseman Justin Bour, catcher Jonathan Lucroy and scrapheap starters Trevor Cahill and Matt Harvey. Inclusive of Allen, all were inked for one year each only at a total of $34.5 million.

Owner Arte Moreno went into the offseason with $116.8 million committed to players, $61 million alone to Mike Trout and Albert Pujols. Trout is signed through 2020 and Pujols through 2021. They also have Justin Upton inked for $16 million.