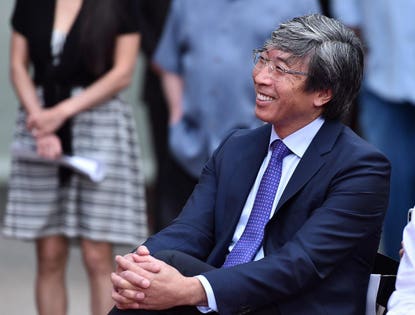 While billionaire M.D. Patrick Soon-Shiong’s flashy purchases of the Los Angeles Times newspaper or investments in video-gaming companies have more recently made headlines, it’s his longtime estimated stake in biopharma giant
that helped push his net worth up at least $194 million on Thursday on a day when many other billionaires’ fortunes took a dive.

At market close, Celgene shares were up nearly 14% following
’s Thursday announcement that it would pay $74 billion in cash and stock for the company. Soon-Shiong is now worth an estimated $6.9 billion according to Forbes real-time rankings of the world’s billionaires. As Forbes reported, Bristol will give one of its own shares plus $50 for each share of Celgene, which is about a 54% premium to Celgene’s closing price Wednesday. Earlier in the day Thursday Celgene’s shares jumped 31% following news of the merger.

Serial entrepreneur Soon-Shiong acquired a stake in Celgene in 2010 after he sold the pharmaceuticals company he founded, Abraxis, to the biotech for $4.5 billion, and he became the largest individual shareholder in the stock. Soon-Shiong had invented cancer drug, Abraxane, which later became one of Celgene’s blockbuster hits after it was shown in a study to extend the lives of patients with pancreatic cancer.

Still despite the Celgene bump, Soon-Shiong’s net worth is down some $900 million from when he appeared on the Forbes 400 in October 2018 at no. 198; his rank is now no. 203. Soon-Shiong’s stakes in the two publicly-traded businesses he’s founded NantHealth and NantKwest are down more than 85% and 50%, respectively, in the last six months.

To stay in the loop with Forbes Health coverage, subscribe to the Innovation Rx newsletter here.