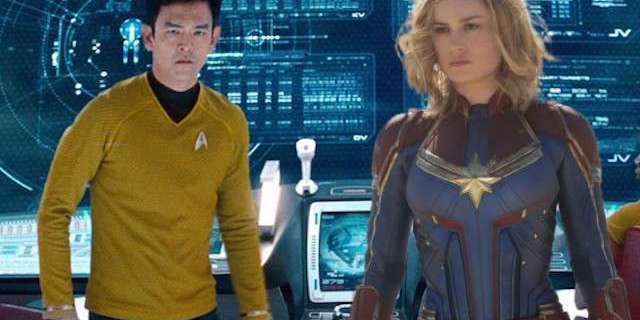 The Marvel Cinematic Universe and the world of Star Trek will be represented when the Los Angeles Online Film Critics Society presents their first-ever awards for excellence in acting next month.

Along with the Trailblazer Award, this year the LAOFCS will be introducing their Achievement Award which will honor excellence in acting. These two awards will be presented to the winners at the ceremony on the 9th of January.

The Los Angeles Online Film Critics Society announced today that actress and filmmaker Brie Larson will be receiving their 2nd annual Trailblazer Award. In 2018, Jessica Chastain was the first recipient to receive the award. The Trailblazer Award was created to highlight and celebrate actors and filmmakers who not only speak out about important topics but are advocates for change. The members of the Los Angeles Online Film Critics Society are dedicated to making the film industry a better place and Brie Larson’s call for inclusivity was one of the main reasons why the group was created in late 2016.

Over the past several years, Larson has spoken at great lengths about the importance of gender equality, equal pay, female filmmakers, and underrepresented voices in film criticism. In June of 2018, Larson received the Women in Film Crystal Award for Excellence. While receiving the award, Larson used her acceptance speech to address the lack of voices in film criticism. Her speech, which highlighted concerning statistics from a USC Annenberg Center for Inclusion study quickly sparked a much larger public conversation. Larson also used the platform to announce that both the 2018 Toronto International Film Festival and 2019 Sundance Film Festival would be increasing their press credentials by 20% to include underrepresented critical voices.

Since June, there have been strides to help promote underrepresented voices in entertainment journalism, including the launch of Critical, an opt-in database connecting underrepresented film critics and journalists with publicists, studios, film critics associations and talent. This has contributed to a major overhaul in the Rotten Tomatoes’ format to include many more and a wider diversity of voices in the Tomatometer scores.

Actor John Cho will be the first recipient of the new LAFOCS Acting Achievement Award. Since his career began in 1997, Cho has starred in over 100 different films and television series. He has taken on a wide range of roles across almost every genre including comedy, drama, sci-fi, and horror. Cho has even played a major role in several big Hollywood blockbusters including his portrayal of Sulu in J.J. Abrams’ Star Trek. In 2017, Cho acted alongside Haley Lu Richardson in Kogonada’s indie sleeper hit, Columbus. The film, which premiered at the Sundance Film Festival, received critical acclaim and was nominated for several awards including four Spirit Awards.

In 2018, Cho played David Kim in Aneesh Chaganty’s Searching. The film, as well as Cho’s performance, were praised by critics and audiences alike. The role earned him a Spirit Awards nomination for Best Actor. Also, in 2018, Cho voiced the character Father in Mamoru Hosoda’s Mirai. The film has been praised by critics and was just nominated for Best Animated Film at the 76thAnnual Golden Globe Awards and at the 24th Annual Critics’ Choice Awards. Looking ahead, Cho has no plans on slowing down anytime soon. He just wrapped filming Nicolas Pesce’sThe Grudge as well as Tigertail which is written and directed by Alan Yang. Cho is currently in production on Jordan Peele’s reboot of The Twilight Zone.