An official video recap of BEHEMOTH‘s November 24 concert at the Wiltern in Los Angeles, California can be seen below.

BEHEMOTH‘s latest album, “I Loved You At Your Darkest”, was released on October 5 via Metal Blade Records in North America and Nuclear Blast in Europe.

Unlike “The Satanist”, which was primarily recorded in one studio, “I Loved You At Your Darkest” saw its production spread across Poland and the United States. It was produced by the bandmembers themselves, with drum co-production by Daniel Bergstrand (MESHUGGAH, IN FLAMES), mixing by Matt Hyde (SLAYER, CHILDREN OF BODOM) and mastering by Tom Baker (NINE INCH NAILS, MARILYN MANSON). Which is to say nothing of the 17-piece Polish orchestra arranged by Jan Stoklosa and engineered by Tomasz Budkiewicz.

BEHEMOTH frontman Adam “Nergal” Darski told RockSverige about the “I Loved You At Your Darkest” title: “It came straight from the Bible, a quote from Jesus Christ. It started with me thinking that there was no way I could top ‘The Satanist’ and the genius of it. I mean, speaking of the title. It was this one-word, super-strong and a powerful statement and nothing can really compete with that. In order to follow that, I must come up with something completely different, so we said we would bring something revolutionary within our own subgenre. This title is refreshing and new and redefining and that’s what it’s meant to be. I’m super happy that it grew on me because I’ve had it in my head for a year and I wasn’t entirely sure. I was, like, ‘Hmmm, maybe it’s risky.’ But then I was also, like, ‘It’s risky. Let’s go for it!’ You know, we’ve got a saying in Poland, ‘If you don’t risk it, you never drink champagne.’ So let’s hope for at least a little glass afterwards. I just thought that… let’s make a long story short… let’s go to the source of all evil and steal this sentence and twist it around and redefine it and give it our own meaning and then just throw it back at our opponents and see how they react. Or maybe they don’t. I don’t give a fuck. By doing that, it’s a very sophisticated blasphemy, so to say, because, obviously, I’m quite the opposite to your regular Catholic friend or whatever. I’m anti this and I’m not following their rules; I follow my own rules. I’ve always been about this and played with it, these black-and-white, yin-and-yang kind of meanings and symbols and these contradictions and opposites poles and extremes and when you confront them together, that’s what triggers the most interesting effect. To me, when you go through the album and you listen to ‘God = Dog’, you get these kids versus this extreme heavy music and the kids are singing pretty controversial verses for many people. To me, that’s the point. You confront the innocence of a child with a grown-up’s aware statement, an anti-religious statement and that’s what I find fascinating.” 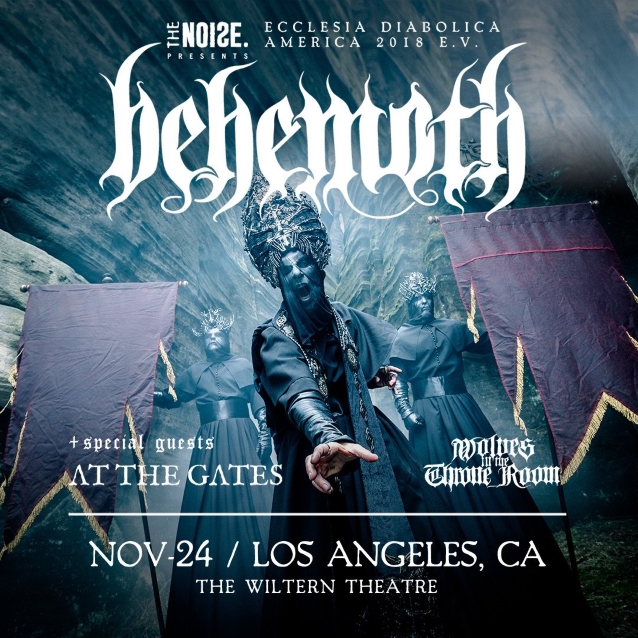 To comment on a
BLABBERMOUTH.NET
story or review, you must be logged in to an active personal account on Facebook. Once you’re logged in, you will be able to comment. User comments or postings do not reflect the viewpoint of
BLABBERMOUTH.NET
and
BLABBERMOUTH.NET
does not endorse, or guarantee the accuracy of, any user comment. To report spam or any abusive, obscene, defamatory, racist, homophobic or threatening comments, or anything that may violate any applicable laws, use the “Report to Facebook” and “Mark as spam” links that appear next to the comments themselves. To do so, click the downward arrow on the top-right corner of the Facebook comment (the arrow is invisible until you roll over it) and select the appropriate action. You can also send an e-mail to blabbermouthinbox(@)gmail.com with pertinent details.
BLABBERMOUTH.NET
reserves the right to “hide” comments that may be considered offensive, illegal or inappropriate and to “ban” users that violate the site’s Terms Of Service. Hidden comments will still appear to the user and to the user’s Facebook friends. If a new comment is published from a “banned” user or contains a blacklisted word, this comment will automatically have limited visibility (the “banned” user’s comments will only be visible to the user and the user’s Facebook friends).