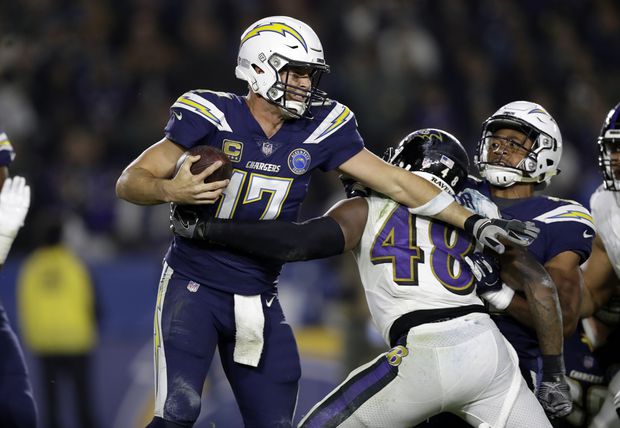 OWINGS MILLS, Md. — John Harbaugh joked Sunday that he and his assistants might finish work at a reasonable hour each day this week. The 11th-year Baltimore Ravens coach grasps the bloated stakes of Sunday’s wildcard game against the Chargers, but he also knows his staff pored over film of their opponent just two weeks ago.

Baltimore’s 22-10 win over Los Angeles on Dec. 22 remains fresh in his memory.

“There’s not a lot more tape to break down,” Harbaugh said. “Maybe both of our coaching staffs will get home a little earlier.”

Then he thought a second and shrugged: “I don’t know,” he added, “probably not.”

While it might help coaches shed some grunt work, the Ravens and Chargers’ recent matchup adds an extra layer of intrigue to Baltimore’s first postseason contest in four years. Though rookie quarterback Lamar Jackson has won six of seven games as the Ravens’ starter, he’s never faced the same NFL team in that role twice, let alone played two games against one opponent in a 15-day span.

Baltimore has built an offense around Jackson’s running ability in a league that has tilted more and more toward the pass in recent years. Skeptics have said week in and week out that opponents will eventually find ways to suffocate the Ravens’ new-look running attack.

Fads often flame out fast in the NFL, some pundits will happily point out.

The Chargers are the first team that can lean on a game’s worth of experience playing against Jackson to prepare to face him another time. The Ravens must counter with creativity and execution, Harbaugh said.

But Harbaugh’s also defended Baltimore’s attack — which relies on zone-read runs and quarterback options — and Jackson’s abilities as sustainable in the moden NFL.

“This is not some fly-by-night offense, this is not something that somebody just made up in their head. This type of an offense has been around for decades and decades. The concepts have been there,” Harbaugh said. “I’m excited to see where it goes. I think our coaches have done a great job of expanding it and throwing formations and motions and different things out there that really haven’t been done before. So that’s the creative part of it.”

‘Time is ticking’: Baltimore Ravens’ veterans relish return to postseason a bit more than most

On other side of the ball, the Ravens will have to contend with veteran Chargers quarterback Philip Rivers. Baltimore sacked Rivers four times in the win earlier this month, and defensive coordinator Don “Wink” Martindale praised safety Eric Weddle’s ability to disguise coverages and trick the Chargers’ signal-caller.

“Weddle totally messed with Philip Rivers that entire game,” Martindale said. “He did an outstanding job.”

Rivers, like the rest of the Chargers’ staff, will have time to study and learn from his worst outing of the year. The Ravens’ top-ranked defense frustrated L.A. that night, and Jackson led the offense to enough success to polish off a signature road win.

They’ll try to ride a similar formula to victory Sunday to advance in the playoffs, but they’ll have to do it while both teams begin a race a few steps ahead of the typical starting line.