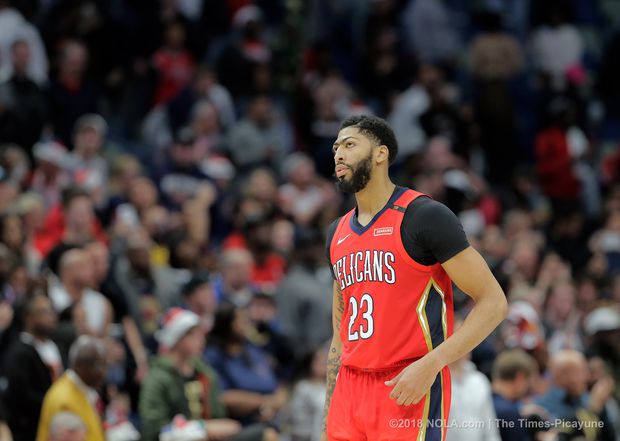 Your latest batch of Anthony Davis rumors are here, courtesy of the New York Times’ Marc Stein, and (predictably) they include both the Boston Celtics and the Los Angeles Lakers.

In his latest newsletter, Stein said NBA executives have been asking an important question (and he expects that question to continue making the rounds at the G-League showcase in Las Vegas this week): Shouldn’t the Lakers ignore the fact that the New Orleans Pelicans are likely to wait until this summer and go after Davis now, while Boston is forced to spectate?

The answer is relatively simple. Yes, of course they should. New Orleans, meanwhile, would be foolish to listen too closely. A package of Brandon Ingram, Lonzo Ball and Kyle Kuzma (or some similar construction) would be a valuable combination of young assets. But that package will also be available this summer.

The Lakers aren’t going to move any of their potential assets in a Davis deal before they have an opportunity to offer them for the Pelicans big man. LeBron James and Anthony Davis, with whatever players you want to put around them, form the basis of a contender. Los Angeles’ worst-case scenario is making a mid-season deal only to find themselves one Josh Hart short of a deal for Davis this summer. The Pelicans know that, and they can afford to wait and see.

Two other issues with this question. First, the Celtics aren’t “forced to spectate” because the Pelicans almost certainly aren’t going to trade Davis until he turns them down, which won’t happen until they can offer a super-max contract this summer. Second, even if the Pelicans were going to deal Davis, they would likely wait until Boston could get in the mix. If New Orleans dealt Davis only to find out they could have gotten Jayson Tatum, Terry Rozier and a pair of valuable first-round picks (or, again, some similar construction), they would likely kick themselves.

The Pelicans can’t afford to make a mistake here. Their primary objective should be giving Davis $230-plus million reasons to stay in New Orleans — an offer he understandably might not be able to refuse. In the event he turns them down, the next order of business is finding the absolute best package available, and the Celtics can top just about every other package (and you can bet other offers will shake free in the summer as well).

All that is to say: The Lakers can (and very well might!) offer the Pelicans a massive package now before Boston can officially get into the conversation. But New Orleans would be making a huge mistake by not waiting until they can offer perhaps the best player in the league an enticing max contract, and they would be making another big mistake by not giving the Celtics a chance to blow away the competition in trade negotiations.

That won’t stop the rumors, because the Anthony Davis saga has the potential to shift the balance of power in the league, and those storylines only come around every so often. But the Celtics likely aren’t sweating any mid-season package the Lakers can put together. If they can’t re-sign their star big, the Pelicans benefit enormously simply by having Danny Ainge’s war chest of assets in the discussion.