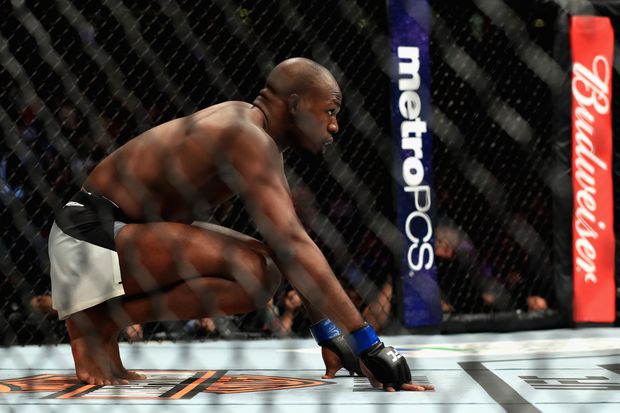 LOS ANGELES — The UFC is moving Saturday’s UFC 232 event from Las Vegas to the Forum in Inglewood, Calif., after the Nevada State Athletic Commission declined to license main-event fighter Jon Jones in light of a trace amount of a banned steroid metabolite found in his system.

Jones has been sidelined since testing positive in California for the same banned substance in July 2017 after his previous fight. The NSAC told the UFC it needed significant time to research the latest sample Jones provided before it could clear him to fight, which led UFC president Dana White to find another venue.

A few weeks ago, White hammered CSAC Executive Officer Andy Foster for his decision to allow Chuck Liddell to fight at age 48. This weekend, White found a new best friend in Foster.

Foster acknowledged the decision to allow UFC 232 to be held at the Forum looks like venue shopping, and that he and White “have a mutual interest,” but Foster told the Los Angeles Times “operating in the best interest of the sport is what matters to me.”

“My relationship is with this sport, and this one is a no-brainer,” he said. “This is not a hard decision to make.”

Foster explained that a letter from a World Anti-Doping Agency-accredited lab director in Salt Lake City exonerates Jones of any wrongdoing, and read passages of the letter sent to him by Dr. Daniel Eichner, who wrote that the metabolite M3 of the banned steroid DHCMT “can be detected for a considerable amount of time,” longer than the 17 months since it was first found in Jones last year.

UFC executive Jeff Novitzky, a longtime anti-doping investigator who now supervises fighter health and safety, said the key portion of Eichner’s statement is that the metabolite presence “would not result in any performance enhancement in relation to Mr. Jones’ upcoming bout.”

Eichner reported to Foster that Jones’ Dec. 9 sample shows “there is no evidence that DHCMT has been re-administered” since July 28, 2017. “The persistent reoccurrence of M3 … is not uncommon, and at these low levels, is not indicative of further exposure.”

Foster said he sought to “trust but verify,” and Saturday ordered Jones to board an airplane from his training camp in Albuquerque, N.M., to take a steroid test that came back clean.

With that, Foster told the UFC that California would sanction the UFC 232 card that includes 26 fighters, including the women’s featherweight title bout pitting champion Cris Cyborg versus Brazilian countrywoman and bantamweight champion Amanda Nunes.

Jones (22-1), the former light-heavyweight champion, will have a rematch with Sweden’s Alexander Gustafsson (18-4) for the belt. Their 2013 title fight, won by Jones, is considered by many the best UFC light-heavyweight fight of all time.

The UFC heaped praise upon Foster for relying upon the background knowledge he gained from last year’s Jones case to apply a proper decision.

Jones was stripped of his belt and suspended by California following the 2017 positive test, his second in as many years. The matter came before a U.S. Anti-Doping Agency arbitration panel that ruled Jones’ ingestion of the substance happened accidentally due to his use of a supplement, clearing him to fight by late October. California reinstated Jones’ license to fight nearly two weeks ago, Foster said.

“This is an issue that is complex, but Andy had the benefit of the 18-month investigation he led. There was no one more qualified than Andy Foster to make this decision. He was absolutely up to speed on all of these issues,” UFC Chief Legal Officer and Executive Vice President Hunter Campbell said. “Andy spoke to experts. He was absolutely fair, correct and learned these issues … he’s been so deep into this.”

Foster said he consulted with his commission chairman and commission medical experts before clearing Jones to fight.

“Our doctors agreed with what the (WADA) scientist says, and we have a negative test on top of that,” Foster said.

Some fighters aren’t happy. UFC fighter Corey Anderson said on Twitter that he had spent “a lot of money” to take his family to Vegas for the fight. He also wrote that he’s disappointed that fighters that stay clean have to suffer while Jones, who has had testing violations in the past, gets special accommodations because he “sells a lot of tickets.”

Cris Cyborg, who is fighting in one of the card’s featured bouts, apologized to fans upset about the move to L.A. but said it was beyond her control.

MMA journalist Ariel Helwani, who covers the UFC for ESPN, offered a novel idea. He suggested the bulk of the card could have stayed in Las Vegas while the Jones bout could have been held in California.