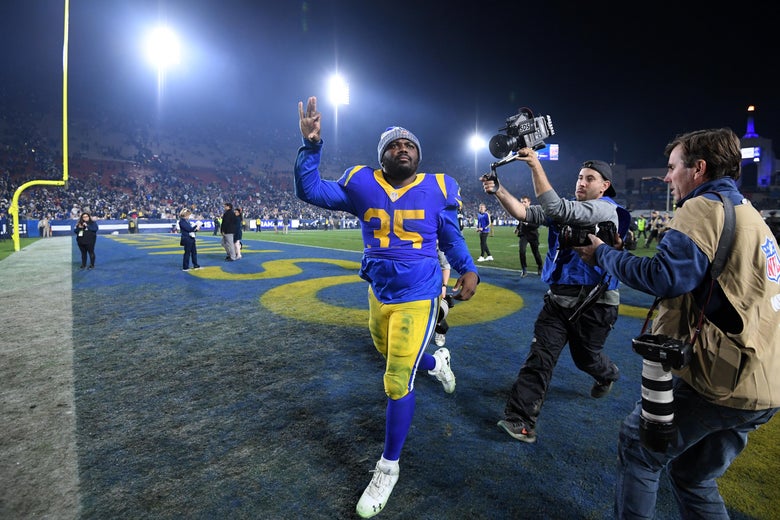 Todd Gurley is the best running back in the NFL. The Los Angeles Rams signed the generational talent to a $60-million contract extension in the offseason, making him the league’s highest-paid player at his position. Despite missing two games this season, Gurley finished with 21 total touchdowns and was a perfect fit for head coach Sean McVay’s sophisticated offense. Los Angeles faced the Dallas Cowboys on Saturday in a huge playoff game, and so the Rams naturally leaned on their totemic rusher: C.J. Anderson.

Anderson is a journeyman backup who didn’t join the Rams until December 18, but the running back rushed for 123 yards and 2 touchdowns in Los Angeles’ 30-22 win over Dallas in the Divisional Round on Saturday. He might be the greatest temp in history.

Anderson had been released by three separate teams in 2018 alone. The Rams signed him after Gurley suffered a knee injury in December, and they rode the former Broncos running back during the final two weeks of the regular season. He proved to be a wrecking ball in those games, but no one outside the Los Angeles locker room could have expected him to feature so heavily against the Cowboys.

Gurley was healthy and played great as well (115 rushing yards and 1 touchdown), but Anderson was the traction engine that kept the Rams moving. He was a joy to watch, partly due to his poofy long sleeves (the mercury in Los Angeles dipped all the way down to the mid-50s) and ginormous frame. Anderson is a big dude, and someone took the liberty of editing his Wikipedia page to reflect his imposing figure.

That may not be accurate, but try and tell that to the Cowboys defenders tasked with tackling him on Saturday.

You could feel Anderson’s touchdown runs through your television set. Does he even get stuck in L.A. traffic, or does he bulldoze BMWs on his way to work?

C.J Anderson was introducing himself to his new teammates three weeks ago. On Saturday, they clung to his back as he rammed Los Angeles into the NFC Championship game. Good job, new guy.