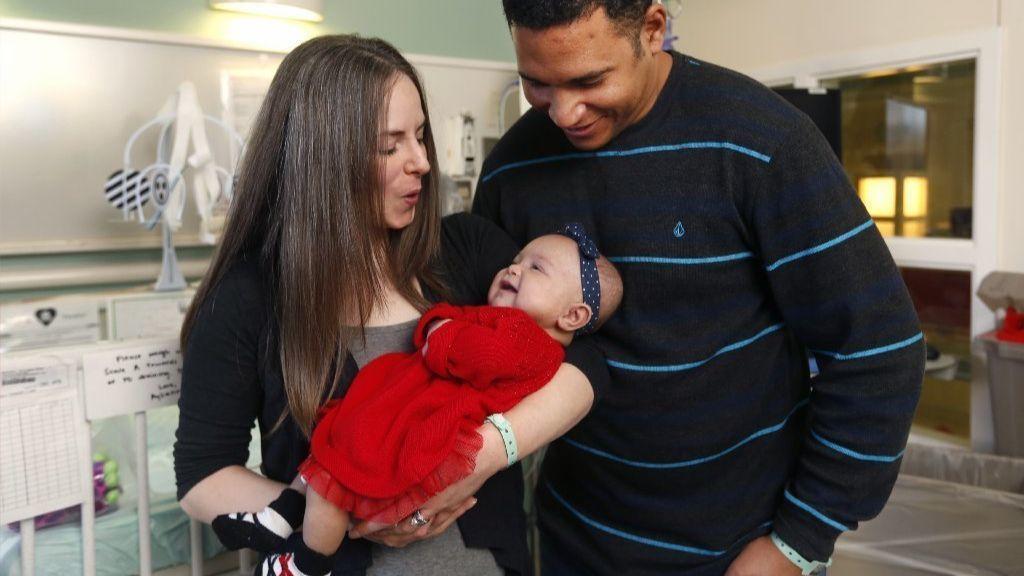 After Aylianna Switzer’s birth on July 11, friends and family came by the hospital to admire the baby. The visitors often made the same remark: “She looks so perfect!”

From the beginning, through, odds against Aylianna’s survival were steep. While in utero, doctors found that she lacks kidneys and a bladder. The recommended course for this so-called “lethal pregnancy”? Induce labor and allow the premature infant to quietly pass away.

There were other options, yet these treatments posed risks. Even in the best case scenario, Aylianna faced a lifetime of medical challenges. The Switzers struggled to find the right path forward.

In the end, they followed their daughter’s lead. “When she showed us she was done fighting, we’d be done fighting,” said Brandon, 37. “And she’s never shown us that she’s done.”

At Rady Children’s Hospital, Aylianna battles on with a cheery flair that defies her diagnosis. After reviewing Aylianna’s charts — “very grim” in the words of Angie, 36 — a Rady nurse came into the baby’s room. She figured she’d taken a wrong turn because this baby, breathing and eating without tubes, showed no signs of ill health.

“She’s like an amazing baby,” said Dr. Nadine Benador, Aylianna’s pediatric nephrologist. “I have rarely seen a baby with renal failure be so mellow.”

At times, Brandon has questioned his fate. He enlisted in the U.S. Army one month before 9/11; he was part of the force that invaded Iraq. Honorably discharged in 2005, he attended college in Phoenix. There he met his future wife, Angie.

The couple married in 2006. Living in Colorado Springs, they began their careers — Brandon is a computer engineer, Angie a civil engineer — but both wanted to take on another role, as parents. They suffered two miscarriages, each within the first 10 weeks of the pregnancy.

They learned of a third pregnancy in December 2017, and it initially seemed uneventful. But at 20 weeks an ultrasound found nothing but empty space where the kidneys should have been.

The news shook the couple. “You felt like you were always unlucky,” Brandon said.

The embryo was also dealing a total lack of amniotic fluid. Angie needed weekly injections of a solution, with MRIs giving an internal view of the procedure. During the second or third injection, the Switzers watched their daughter grab the needle and give it a shake.

Angie spent the final three weeks of her pregnancy in the hospital. Coming out via emergency Caesarian section, Aylianna announced her presence with a loud scream.

“I was crying,” Angie said. “I was so happy that her lungs were working.”

Aylianna was tiny — 4 pounds, 6 ounces at birth — but her challenges were huge. On her second day, she underwent surgery to install a dialysis catheter.

That first catheter was too large for this little person. A smaller catheter worked, but the surgical site leaked. Treatment after treatment failed. Aylianna was four weeks old when Children’s Hospital Colorado sent the ailing baby to hospice.

The baby’s team of supporters rallied, calling pediatric medical units around the country. In San Diego, the call was answered by Erin Phebus. That nurse and transplant coordinator alerted Benador, a specialist in children’s kidneys.

“Her diagnosis was bad,” Benador said. “But I’ve been successful before. I’ve tried with little babies and they are big people now.”

The Switzers arrived at Rady Children’s Hospital on Aug. 23. Within hours, Aylianna underwent surgery to expand a valve in her heart. Her parents settled in for an extended stay, moving into the Ronald McDonald House and then a San Diego apartment.

At Rady, several dialysis techniques were tried, with success. Aylianna now undergoes a form of dialysis 14 hours a day, gaining strength and weight. Eventually, she’ll need surgery to equip her with an artificial bladder. In her lifetime, she’ll also need several kidney transplants. The first one cannot be attempted until she weighs at least 22 pounds.

Aylianna is spending Christmas in her hospital room, accompanied by her parents. Her grandfather, Thomas Switzer, is also visiting from Las Vegas. The little room can be crowded, but doctors say the baby may be healthy enough to leave the hospital by Friday.

This holiday season, her parents have been counting their blessings. Angie rattles off a list of the non-profits that have defrayed their expenses: Ronald McDonald House, Miracle Babies, Girl Scouts, Thirty-One Gifts, Fisher House, There With Care, Now I Lay Me Down to Sleep, CaringBridge, church groups and an army of volunteers.

Parents and child are at the start of a long road, and they understand that the decisions they made may not be right for other families coping with a similar crisis.

“Our whole story,” Brandon said, “through everything, there were a lot of days when we didn’t know if she would make it. Lots of days we were so happy and other days we were just crushed.”

“But I would do it all over again,” Dad said.

From her hospital crib, Aylianna gave a yelp.