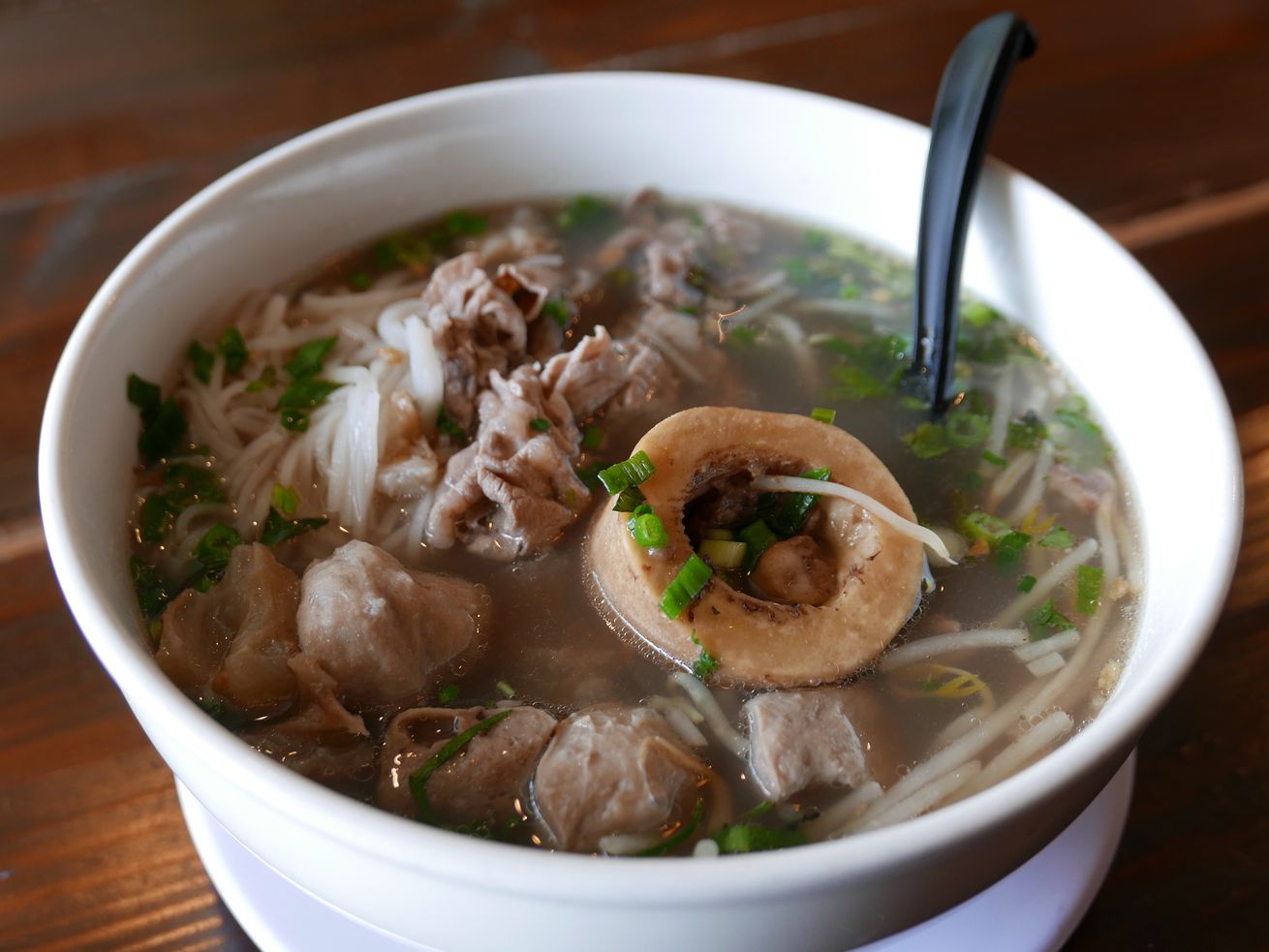 Nouilles of 3rds draws on Cambodian cooking traditions in Lomita

The name game is always fun to play with restaurants. Some places have especially puzzling names based on obscure references or inside jokes that keep customers guessing. The San Francisco Chronicle recently unearthed different restaurant name origins, and LA of course has similar mysteries to solve. In the tiny South Bay city of Lomita, Nouilles of 3rds primarily serves Cambodian comfort food with a beguiling moniker along busy Pacific Coast Highway.

Nouilles translates from French as noodles, which makes sense given Cambodia’s history of French colonization. That is just one part of a play on words that the owners previously explained on their bygone website, referencing the rule of thirds. That basic rule of photography naturally directs viewers where to focus and informs plating at this restaurant.

Cambodia is a Southeast Asian country that’s slowly overcoming a horrific history of oppression and turmoil. The nation is about the size of Missouri and situated on the Gulf of Thailand, sandwiched between Thailand and Vietnam in Southeast Asia. Cambodia also shares a border with Laos, and contains 300 miles of Mekong River. Some culinary overlap with neighbors was inevitable. Nouilles of 3rds also draws from other Asian cooking traditions on a small menu that focuses on one-dish meals and shareable starters.

The restaurant’s now-defunct website was unequivocal about the kitchen’s focus, saying, “Noodle soup is what we do best.” N.O.3 House Noodles Soup ($13) is definitely the main attraction, a unique pho featuring fragrant, savory beef broth. Nouilles of 3rds cooks their stock for seven hours with beef bones, cinnamon sticks, aromatic galangal, umami-rich fish sauce for depth of flavor, and a host of other ingredients. Before serving, it adds thinly-sliced prime beef, collagen-rich tendon, bouncy beef meatballs, and based on availability, a marrow-filled bone that breaches the soup’s surface like a fat-filled periscope.

Crunchy bean sprouts, roasted garlic, clipped scallions, and cilantro round out the bowl. From there, only a couple of choices remain. Thin rice or egg noodles? Also, whether, does adding hoisin, spicy chile sauce, and or a squeeze of lime make sense? This noodle soup needs no embellishment, so condiments come down to personal preference.

Chicken noodle soup ($8 to 10) is a far more basic bowl, but still satisfying. Clear chicken stock hosts juicy pulled free-range chicken, sweet shrimp, and another light shower of crispy roasted garlic, scallions, cilantro, and a dash of white pepper. One again, diners are given a choice of rice or egg noodles. Rice noodles are less filling, but both work.

Hainan chicken ($12) was the restaurant’s only letdown, a relatively wan plate of fairly dry shredded free-range chicken (white and dark meat) served atop rice with more pickled vegetables with typical sauces, all house-made, but not enough to overcome deficiencies.

The full-service restaurant is certainly a pleasant enough place to sit for a meal, but the multi-layered noodle dishes are clearly a bigger draw than the setting.