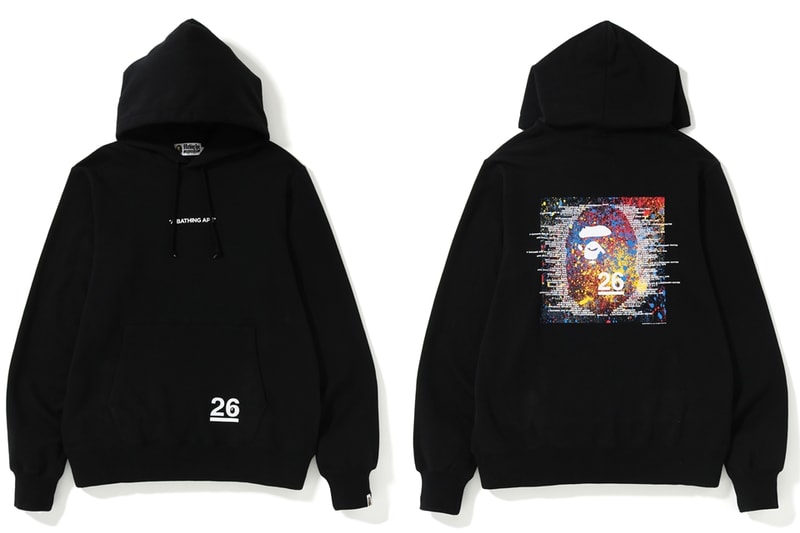 One week after unveiling a special collaborative run with DC Comics, BAPE refocuses on its solo output for a celebratory new anniversary lineup. Specifically, the world-renowned brand has put together an accessible collection of hoodies and graphic tees to commemorate BAPE’s 26th year as a company.

For BAPE’s 26th anniversary offering, the label will release a new hoodie design in five different colorways — black, red, blue, white and yellow — and a very similar t-shirt style in the same tones. For the graphic that adorns every single item that makes up BAPE’s latest release, the designers have dressed an experimental take on the iconic "Ape Head" motif in a blotchy and busy blend of several different colors and placed it on the back of the pullovers — standard, smaller-scaled "A BATHING APE" text and a "26" are on the other side — and on the front of the tees.

"Since passing its 25th milestone, there is no stopping A BATHING APE®," reads an official statement from BAPE. "The new designs will give the wearers a glimpse of the new A BATHING APE®."

You can take a look at the hoodies and graphic tees featured in BAPE’s new 26th anniversary drop above, while the collection will the shelves of A BATHING APE retail spaces starting this Saturday, April 6.

For more, revisit some of BAPE’s best 25th anniversary efforts from 2018.