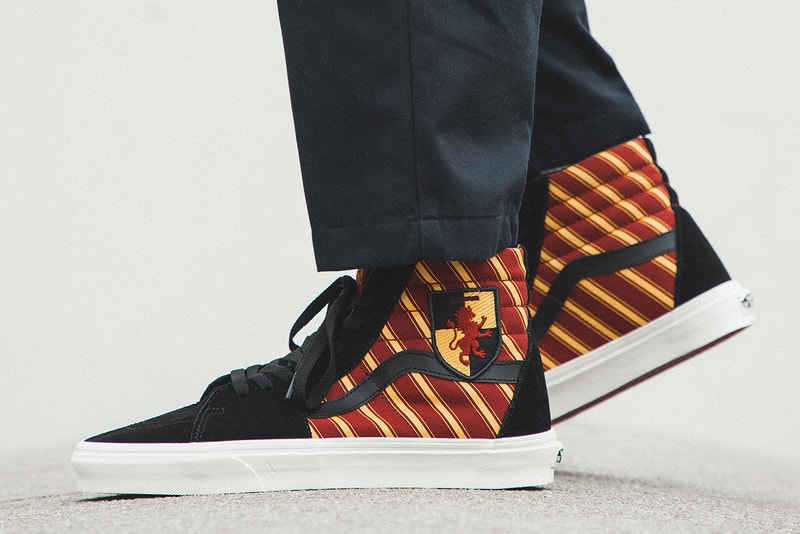 After a first look at the full collection was debuted last month, four silhouettes from the upcoming collaboration between Vans and Harry Potter have now received an on-foot look. The collection features sneakers in honor of each of the four Hogwarts houses, including a Gryffindor-themed Sk8-Hi and an Era silhouette in reference to Slytherin.

The Sk8-Hi comes with red and gold stripes across its black upper, with a contrasting black Jazz Stripe and muted white midsole. The stand-out feature is the house’s lion crest, which comes as a patch on the sneaker’s medial side. The Slytherin Era references the house’s snake crest with a scale-style pattern across the upper, as well as a black and dark green leather construction and the motif itself on the tongue tag.

As well as the house-themed sneakers, the collection also features another take on the Era silhouette, which comes covered in clippings from the Daily Prophet, the fictional newspaper from the Harry Potter series. Lastly, there is also a second Sk8-Hi wrapped in an iridescent blue colorway. This design is then finished with repeated lightning bolts across the checkerboard upper.

These four sneakers are set to release via HBX at 10AM EST on June 7. The collection will also feature a Ravenclaw-themed Authentic and a Classic Slip-On for Hufflepuff.

For more from Vans, take a look at the "Warped Check" collaboration with size?.