We asked an Angeleno to anonymously chronicle a week in her sex life—with no sultry detail spared. Here’s a peek at what goes on between her sheets.

I’ve been with my best friend all day. I’m hanging out with H tomorrow night, but plans are up in the air. Yesterday I mentioned the possibility of going to a house party, which he was surprisingly open to, considering we’ve been seeing each other on and off for a year and we don’t know each other’s friends.

9:15 P.M.
H calls and talks about wanting to go to a Nine Inch Nails afterparty tomorrow, which suddenly sounds very up my alley. I like when he takes initiative on making plans—it makes me feel less crazy and like I’m not making up my feelings. 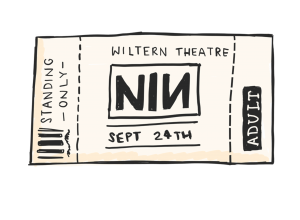 9:30 P.M.
I group-text two guy friends asking what a girl wears to a NIN afterparty. They give me ideas like “meat dress,” “The Craft,” and then say, “Just get a ticket to the show, nerd. We’re going.” They’re supportive and hilarious, saying that they’ll fight H. I am lucky to have them.

11 P.M.
I send a message to J, aka The Italian, for a second opinion on the outfit. We met last summer while H and I were on a surf trip in Asia (I felt ignored by H, so I flirted with J). We’ve DM-ed every day since. J is unreal hot, and I’m sure we’re in love. Now we send memes and nudes and call each other “hipsters” from across the world. He doesn’t know that I still talk to H.

10 A.M.
I call H and tell him that I’ve “come across” NIN tickets and that we’re going. He’s stoked.

5 P.M.
Outfit anxiety sets in. I call H. He’s going “industrial” and tells me that he’s gotten some great MDMA. I’m excited to take drugs with him. 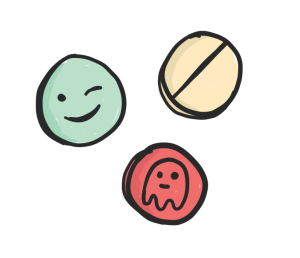 8 P.M.
I end up looking good. Slim, which is unfortunately still important to me. I send a selfie to J, who replies with hearts. I send one to my mom, who says I look like a model. She is wary of my whole situation with H.

8:30 P.M.
I Uber to H’s. I’m planning on staying over, which has been historically iffy. He
has a hard time sleeping next to people.

9:45 P.M.
At the concert, introducing H to my friends is easy. The MDMA kicks in. I cry during “Hurt,” and H puts his arms around me.

12:15 A.M.
The afterparty is one of those “undisclosed location” things, and I feel like I’m somewhere I’d be with my roommate four years ago, buzzy and happy. Gliding into red lights, I see girls in fishnets and lingerie. One spanks another while bent over a vintage pommel horse. Oh, I get it now. H and I smile at each other.

A couple of weeks ago, in bed, he tied me up unexpectedly. We don’t sext, but I had sent something about a bondage fantasy involving paracord months prior when I felt like I was losing him. I didn’t get a response, which felt horrible. When he asked to tie me up, I was sure it was the most thoughtful thing he had ever done. 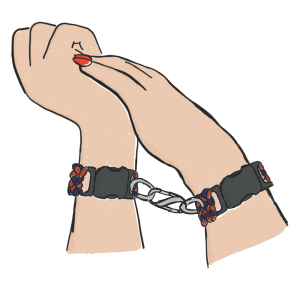 10 A.M.
Morning sex, and it’s great. We restrain each other, and I think about the night before. The first time we had sex, he moved his hand toward my throat, and I fell in love. We lie around for the rest of the day napping in the dark—very early 20s, in a good way.

3 P.M.
I go to a gift exchange with college friends. My gift is a butt plug. Not my thing, but this feels full circle enough to laugh. 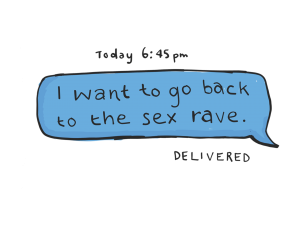 10:05 P.M.
I realize that I have used my family’s joint account to order them. Panic.

9:30 P.M.
I miss a call from H while I’m at dinner. He texts asking if I’m free next Tuesday for a birthday dinner with his friends. He wants help planning. I’m in shock.

11:30 P.M.
J wants to visit L.A. this month. He has friends here, whom I now know. I’m nervous and wish he had come last year. I can’t sleep with two people at once, and things with H feel good.

10 P.M.
I meet some of his friends. S is a girl whose photos he likes on Instagram. We are opposites physically, which is hard for me: I’m tall and skinny and brunette—anyone short with big boobs who I’m not friends with is a nightmare.

2 A.M.
S couldn’t have been nicer, and now we might be best friends. She and I do a little coke and have a few drinks. I crash at H’s house. No DMs to J.

3 P.M.
It’s H’s 30th birthday. I surprise him with a drive to Oceanside to go skydiving. He loves it. He usually hates birthdays. 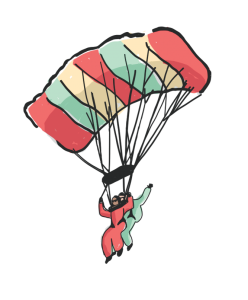 5 P.M.
On the way home he asks if I want to go to dinner with his parents that night. I’m embarrassed to be in athleisure but say yes. I blurt out that I’m nervous to meet his mom and touch up my makeup while I’m driving.

RELATED: Dating in L.A. Sucks. We Did the Math

The post A Week Inside the Sex Life of an Anonymous L.A. Woman appeared first on Los Angeles Magazine.