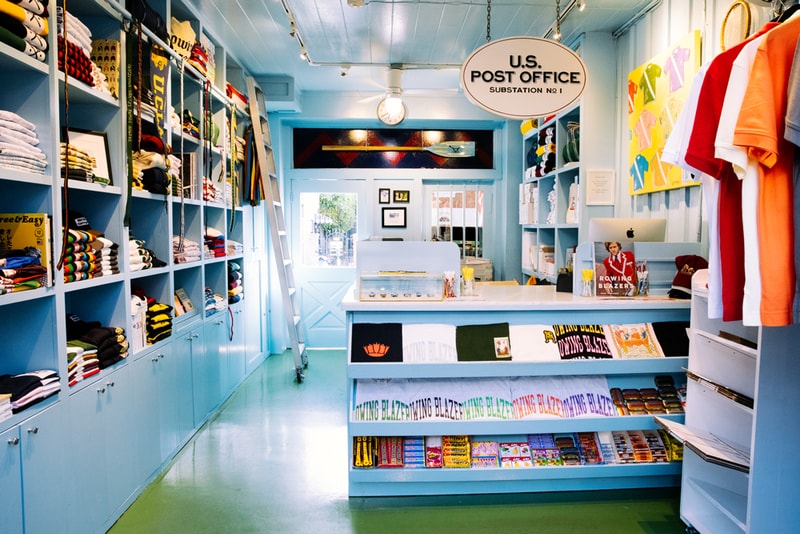 Rowing Blazers is officially bringing its classic American wares to the West Coast. The New York-based label is soon opening its first-ever pop-up in Los Angeles, opting to camp out in the U.S. Post Office of the city’s historic Brentwood Country Mart.

Also known as the Trading Post (and officially called the Brentwood Substation No. 1), the post office also doubles as a mini mart to house niche brands and products and the occasional "Designer in Residence." As Rowing Blazers prepares to take the helm, West Coast customers can expect the brand’s usual offering of polos, blazers, rugbys, T-shirts and a range of accessories to be stocked in the boutique. Fans that are familiar with Rowing Blazers’ revamped New York flagship will feel right at home among the paddle decorations, throwback photographs and pristine visual merchandising.

“The Country Mart is classic. And there’s nothing quite like it anywhere else in the world. It’s real old L.A. — but it’s also the spot where some of the coolest people in the city hang out. It’s cool without being flashy," said Rowing Blazers founder Jack Carlson.

Look out for the pop-up’s official opening today, June 27, and catch it while it’s in town for the next four months from 10 a.m.-6 p.m. PST.

In other store news, KITH is reportedly preparing to launch a location in Paris.

I made a new friend at @rowingblazers pop up today ! Store is crazy good. @jackcarlson ! #brentwoodcountrymart. We ain’t young but we have money moves.