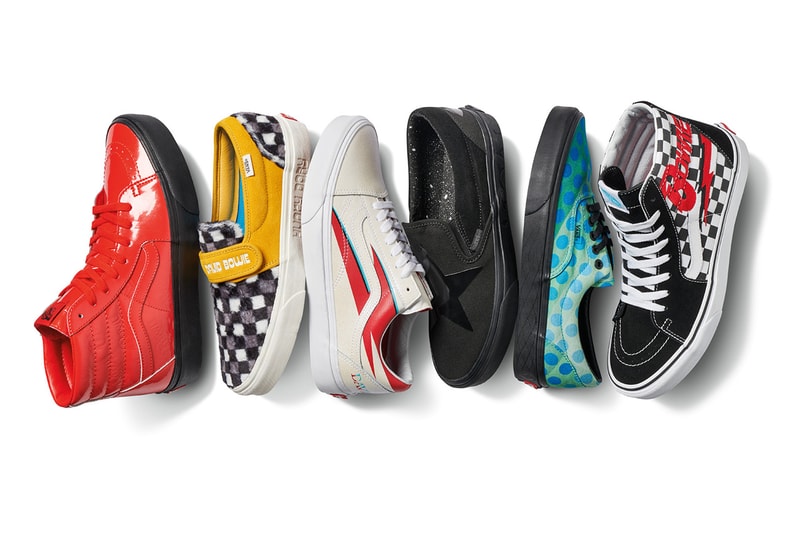 Vans is continuing David Bowie’s creative legacy in a capsule collection that celebrates the musician’s colorful life as "the man who fell to Earth". After a first look at the Slip-On 47 V DX, Era, Old Skool, and Sk8-Hi silhouettes was released recently — complete with a Ziggy Stardust-approving rework — the Californian skating staple has unveiled more pieces for the collaborative collection.

Referencing some of Bowie’s finest work including Space Oddity, Hunky Dory, Ziggy Stardust, and Aladdin Sane, Vans will tap the legend once more in an accompanying apparel collection and exclusive children’s footwear drop. Bowie imagery is drawn from his early albums of the 1960s to some of his latest work in 2016’s ★ album, finding itself inspire the apparel and children’s Sk8-Hi Zip and Old Skool V silhouettes.

Other pieces see a Serious Moonlight-inspired graphic from the 1984 concert video, as featured on one of the trucker caps and a stand out long-sleeve, which combines the Bowie face graphic with the classic checkerboard down one arm. Vans has kept the collection truly collaborative with every piece referencing both Bowie and Vans’ legacy-defining moments, such as "OFF THE WALL" branding and immediately identifiable album covers.

Take a look at the entire Vans x David Bowie collection, including the mini-replica kid’s shoes, above. The collection will release on April 5 at select Vans stores and online.

In case you missed it, Supreme has taken the wraps off its Spring/Summer 2019 T-shirt collection.