In November, as the Woolsey fire raged, Anna Mayer buried a sculpture in a Highland Park garden. Mayer, a longtime Los Angeles artist who recently moved to Houston, had just closed an exhibition at Adjunct Projects, an artist-run space in a garage, and, for it, she’d made a knee-high alkalized ceramic sculpture that resembled a weathered farming tool. Once buried, the alkali would react with the soil, keeping anything from growing above it, thus turning the sculpture into a barren spot of land.

She thought about the fires as she dug. “I was worried about air quality,” she recalls. “And I was thinking that my work must be firing.”

A decade before, in September 2008, Mayer left 12 unfired ceramics slabs in the Malibu landscape. Having researched wildfire patterns, she knew that eventually flames would fire them, but she had no idea when. “It’s been out of my hands for so long,” she says. A brutally destructive fire turning half of her slabs into richly colored objects did not make her “feel much agency about it.”

When she conceived of the project, titled Fireful of Fear, she wanted a way to make something sizable that also respected its surroundings. Her work often strikes a balance between ambition and reticence—climbable arches built from simple sandbags; delicate, intimate objects fired in big glowing nighttime pit fires or kilns made from oil barrels.

Mayer appreciated but did not want to mimic the macho ways in which West Coast ceramic arts icons like Peter Volkous and John Mason made monumental sculpture. Nor did she want to alter the contours of the landscape, like artist Michael Heizer, who dug a massive trench in the desert, or Robert Smithson, who piled salt crystals in the Great Salt Lake. Fireful keeps to a human scale and cedes power to the landscape.

“I think I was also getting my head around the way that land is treated in Southern California,” Mayer says. “The way that it’s consumed and bought and sold and everything.” 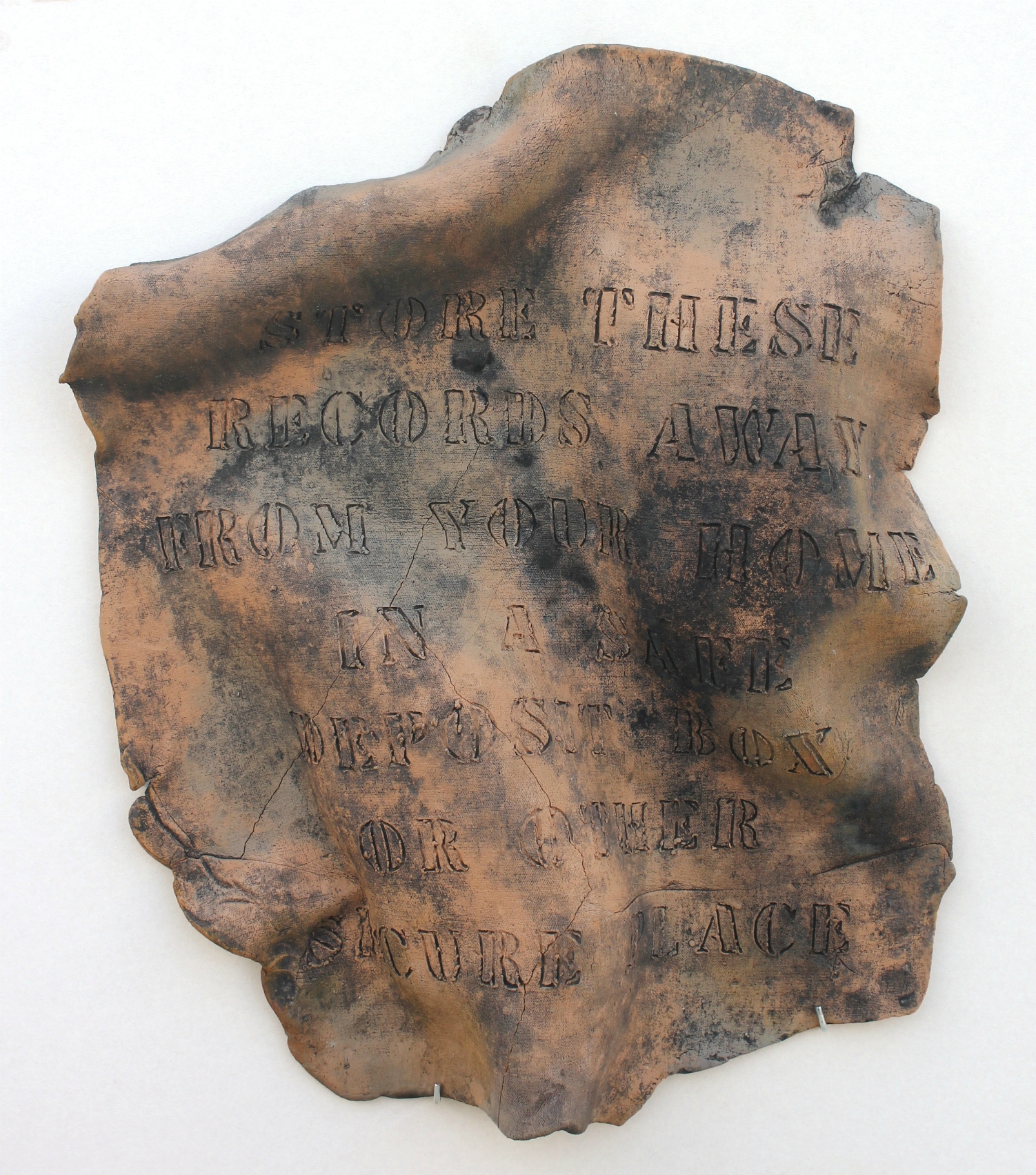 In the mid-1990s, urban historian Mike Davis wrote an essay for LA Weekly called “Let Malibu Burn.” He wrote, “The new density of hillside housing has transformed the battle against wildfire from a war of maneuver into the equivalent of street-fighting.” But “larger armies” would not solve the problem, he went on to say: “One national forest official observed: ‘[…] you could throw in every fighter in the world and still can’t stop it.’”

Mayer, who had read Davis and watched property prices skyrocket as battles over access to public coastal lands seethed, saw Malibu as a place where nature perpetually thwarted human desire to possess it. “The premise of the work is that wild fire is inevitable in that area,” she explains, “but it has gotten really complicated because of all of the development.” She placed her slabs on both public and private terrain, near main thoroughfares and off of rural trails.

Each torso-sized slab resembles an unfurled scroll with text inscribed in the surface. For one, left in Old Topanga, she lifted text from a Vietnam War protest postcard: “Would you burn a child? When necessary.” Another, left in Temescal Canyon, said, “From Where We Sat, The Sunset Looked Like a Place You Could Go.” 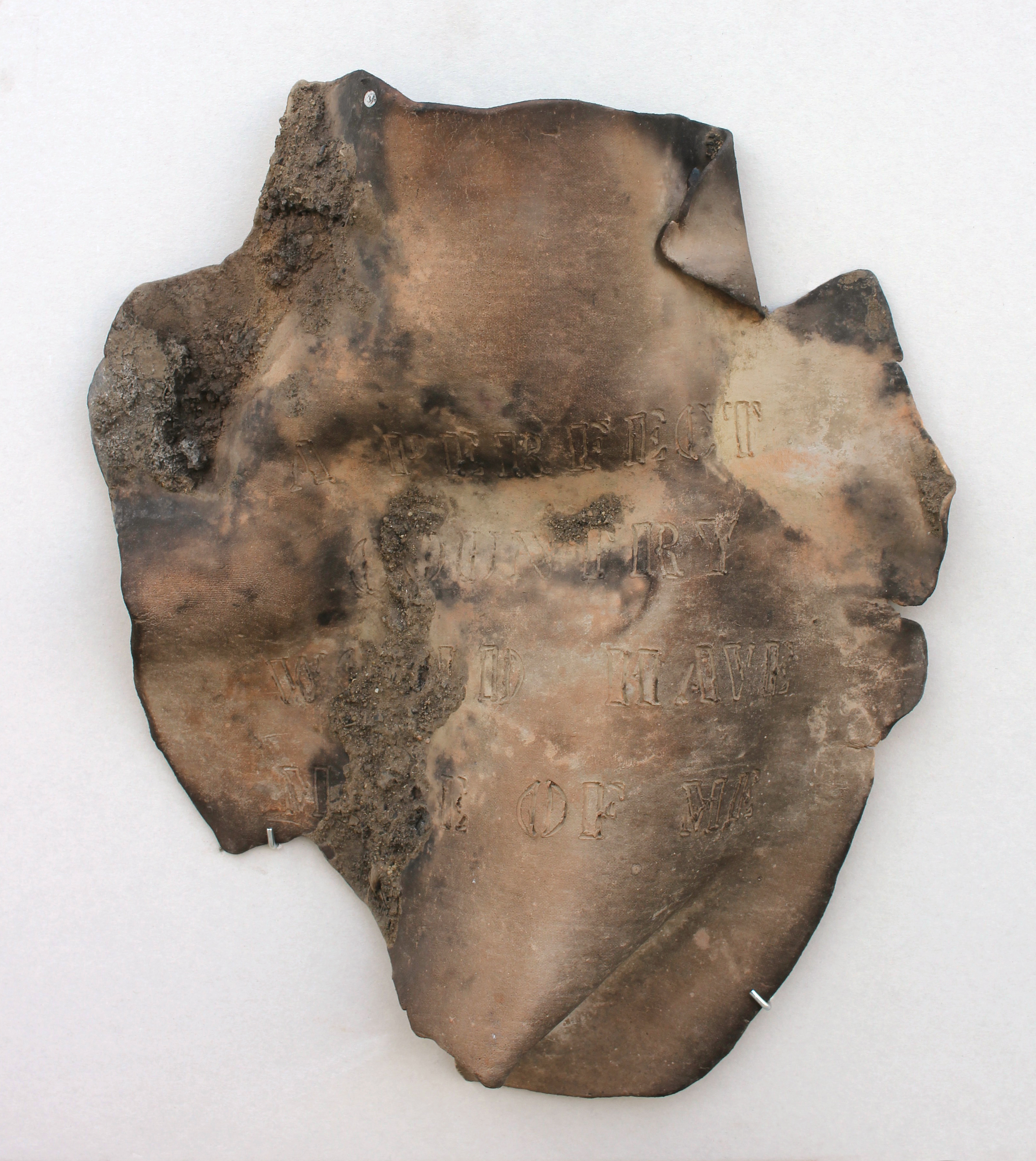 “I was thinking about the pieces as eventual artifacts that might be found by someone who has no knowledge of the work,” says Mayer. “Once the slabs were placed, I had to accept that I might not see them again.” She only went looking for them once, in 2016, finding certain landscapes grown beyond recognition.

Every year, on Fireful’s anniversary, she sent out an email. Ten of those emails in a row read, “None were fired over the last twelve months,” before offering other musings and updates from Mayer’s life. Doing this reminded her of the Christmas letters her parents sent out during her childhood in Ohio. ”It’s kind of darker than that,” she observes, “but it took on that aspect.”

The email she sent in September 2018 again announced that none had been fired before going on to say, “At this point I do not need to remind you that the fires raging worldwide are but one symptom of multiple disasters.” Just over two months later, she was searching for her fired slabs, venturing out first in early December, before mudslides came. Many of Malibu’s trails remained closed, though she did locate two gorgeously fired slabs, their weathered surfaces brown and blue-green, on this first visit.

On January 1, she found two more—one with a burnt branch artfully draped across it, likely left by a passerby. Another, newly buried under fresh dirt, was in pieces when she dug it out. Mud likely dragged the others down inclines, and, at first, Mayer thought of coming back with repelling hooks. Then she changed her mind.

“At what point do I allow them to remain?” “The project hasn’t been about looking after them. It’s not about this huge marshaling of resources to tame the landscape or alter it.” She plans to meet with a conservator to discuss care for the fired slabs, which she now sees as artifacts as well as works of art. Six more slabs remain in the growing chaparral. ”It doesn’t feel like I have done this epic thing, which is very affirming,” she says. “Whatever happens to them happens.”

RELATED: How Does California Clean Up After a Disaster Like the Woolsey Fire?

The post A Decade Ago, a Local Artist Predicted That Malibu Would Be Ravaged By a Wildfire appeared first on Los Angeles Magazine.