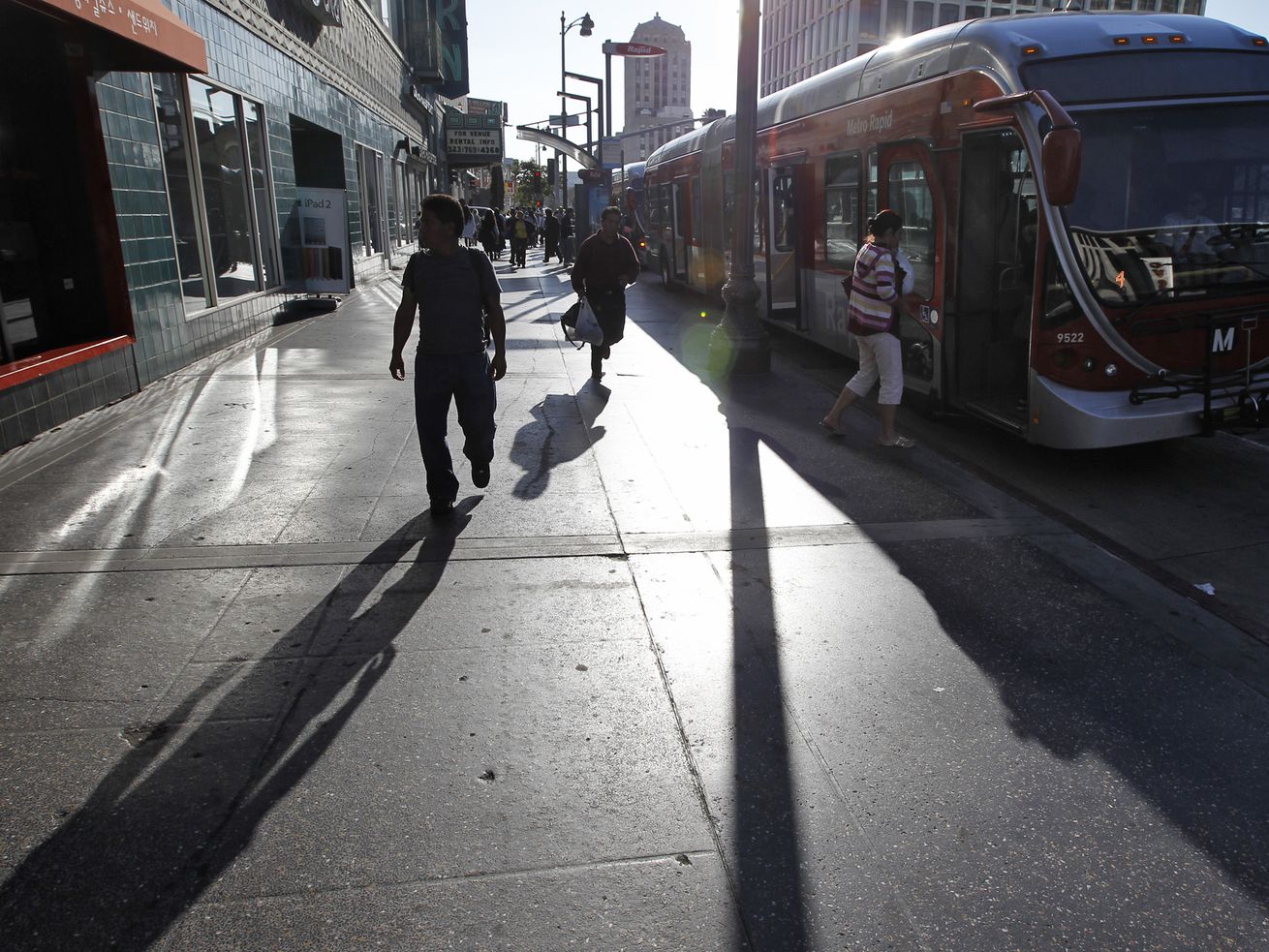 Two popular bus lines pass Santa Monica Boulevard at Vermont Avenue, but with no trees and no bus shelters, dozens of passengers waiting on Tuesday for the 704 and 4 are forced to either improvise or suck it up.

It’s noon, and it’s warm. Riders wait in the sliver of shade created by metal kiosks that display bus route information or in the shade at the entrance to the Red Line subway station about 70 feet away, sprinting when their buses pull up. A pair of women carry their own shade—two big umbrellas.

Ana Palafox is waiting in the sun next to the bus stop sign for the 4. She’s a regular rider, taking the bus five days a week. “It’s not so bad today,” she says, squinting.

Shade should be thought of as a public resource. But in Los Angeles, it’s treated like a luxury.

Of the approximately 7,900 bus stops in the city of Los Angeles, fewer than 1,900, according to the street services bureau, are equipped with shaded structures where passengers can sit and wait comfortably for their ride.

As the city pushes to get more Angelenos out of their cars, and Metro seeks to curb its consistent ridership losses, “we need to be treating [bus riders] with dignity—a big part of that is protecting them from the heat,” says Bryn Lindblad, deputy director of Climate Resolve.

With more hot days expected in the future—days with temperatures about 95 degrees are expected to triple in Los Angeles by 2050—transit advocates say the city must add shade at bus stops and transit hubs.

It’s not just a matter of boosting ridership. It’s about providing for Angelenos who have the least and are dependent on Metro already. The vast majority of transit riders are low-income and do not have access to cars; and many of them walk to bus stops, a 2018 Metro survey of bus users found. With buses frequently delayed, thanks to increased traffic and few bus-only lanes, these riders face longer waits in the sun.

“Why are we neglecting the experience and safety and comfort of the people who are riding the bus?” says Jessica Meaney, executive director of transit investment advocacy group Investing in Place.

Metro chooses bus stop locations, but bus shelter installation is overseen by Outfront JC Decaux, a partnership between two private companies, Outfront Media and JC Decaux. In 2001, they signed an exclusive 20-year contract with the city to put bus shelters on streets for free. In exchange, they sell the advertising space on the panels that make up the structure’s walls and keep a portion of the ad revenue. Since 2002, the partnership has put in about 700 shade structures.

The program was supposed to generate $53 million for the city in the first 10 years. It didn’t. (It was more than $20 million short).

A 2012 audit of the program by then-City Controller Wendy Greuel faulted the byzantine process that required Outfront JC Decaux to get sign-offs and permits from a slew of departments and officials for each shelter.

“With a cumbersome approval process in place, the city was primed for failure to meet the agreed upon schedule from the start,” wrote Greuel. Her report made a host of suggestions for improving the program, but they were mostly ignored, Meaney says.

The fact that these structures were ever supposed to be a money-maker for the city doesn’t sit well with transit advocates.

For some reason, the city of Los Angeles has decided that the only way it’s going to provide shelter for people who are riding the bus is if they can monetize it.

“For some reason, the city of Los Angeles has decided that the only way it’s going to provide shelter for people who are riding the bus is if they can monetize it,” says Meaney.

Instead of looking at bus shelters as possible revenue generators, Meaney says, the city should see the benefits they are providing Angelenos who aren’t driving.

Investing in Place and Meaney have been tracking the bus shelter shortage for years. Later this year, the organization is teaming up with Los Angeles City Councilmembers Nury Martinez and Marqueece Harris-Dawson, two nonprofits, the city, and Outfront JC Decaux to put 10 bus shelters in each district in the next six to seven months. The stops could possibly incorporate real-time bus arrival information, lighting, or even drinking fountains and water bottle filling stations.

“It shouldn’t take this many players to get together to install 20 bus shelters,” Meaney says.

Another nonprofit, Climate Resolve, will help measure the impacts of the shelters: How much cooler is the stop now that the shelter is there? Do boardings rise after it’s installed? If so, do boardings at close by stops drop, indicating that this new upgraded stop is drawing riders to it?

“The residents of CD 6 deserve quality transit options, just like any other community,” Martinez said in a statement, noting “the brutal San Fernando Valley heat” that affects riders in her district, which includes Arleta, Panorama City, Lake Balboa, and Van Nuys.

To help pick the stops where a bus shelter would be most effective, Climate Resolve will use maps that show the existing tree canopy in the two council districts, overlaid with bus stops with high ridership.

“If you have a shaded stop, there’s less need for bus shelters,” she Lindblad. Unfortunately, Lindblad says, adding trees won’t be part of this project. The city agency partnering on the project is the Los Angeles Department of Water and Power. To add a tree, they’d have to rope in another city department.

Weird how everyone is complaining about the lack of shade at bus stops when each stop has single-serving shade shields made just for your head. Voila! pic.twitter.com/nHtLGt3HWj

There are signs that a shift in the shade tides could be approaching.

Outfront JC Decaux are negotiating with the city now for a 10-year extension to their contract, which will expire in 2021.

If extended, the two companies would use a more data-driven means of selecting bus shelter locations—looking to the stops where high ridership and an existing lack of shade intersect, with the goal of offering shade to 75 percent of bus riders in each council district, says Francois Nion, executive vice president of JC Decaux.

Nion says if they get the extension, they plan to install 1,000 bus shelters over the next three or so years.

“Politics and priorities have changed over the years. I would say that 18 years ago, the need for transit mobility, sustainability, and, more importantly, equity were not part of the discussion,” says Nion.

There is also a move to foster more coordination between city departments that oversee the puzzle pieces of the street that need to be put together in order to add shade in all its forms to the public realm, especially trees.

“Meeting this goal will require us to prioritize growth in places where pedestrians spend the most time—including bus shelters,” says Alex Comisar, a spokesperson for LA Mayor Eric Garcetti

Speaking at a panel he organized at Occidental College in April to explore “shade as an equity issue in warming Los Angeles,” Christopher Hawthorne, the city’s chief design officer, said his main charge was “to think about the design of these spaces in a comprehensive way, which we haven’t really done.”

A more collaborative approach to installing shade at bus stops can’t come soon enough. The bus stops in the Valley and South LA that are being eyed for improvements “are pretty bad,” says Lindblad. “They’re just a poll in the ground,” so the upgrades the program brings will amount to a big step up, she says.