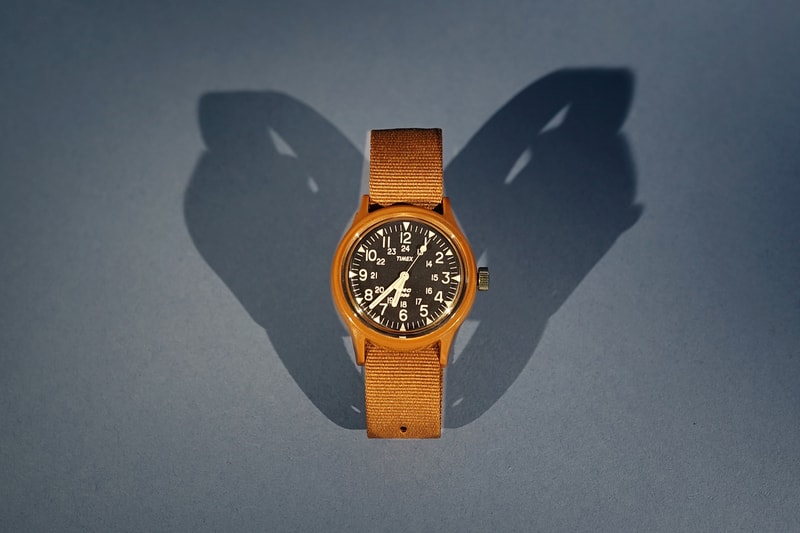 YMC has teamed up with Timex on a limited edition "Burnt Rubber Brown" rendition of its classic military-influenced MK1 watch.

The Timex MK1 was originally released in 1982 and was distributed to the military as a throwaway watch, having a closed case that meant new batteries could not be added. Its simplistic construction made it clean and easy to use as well as allowing for mass production.

Following its 2016 revival, which saw the watch get a contemporary mechanical update enabling the watch to last — rather than be thrown away — the two brands have now collaborated to bring back the MK1 in a YMC-speciality shade. The watch is available in limited quantities and ties into YMC’s current seasonal roster of hues, complementing the likes of its brown patchwork Paraboots collaboration. The watch features a black face which is decorated with a retro-themed cream dial, as well as YMC branding on the face and on the outside of the strap. It is complete with water resistance up to 30-meters and a custom box.

To celebrate the YMC x Timex MK1, the duo teamed up with Hidden Agency to create a visual highlighting the timepiece’s legacy. It draws inspiration from classic ’80s movies such as The Goonies and The Never Ending Story, while referencing video techniques taken from Powell Peralta’s skateboarding films. Check out the video below and pick up your YMC x Timex MK1 at YMC stores and online for £74 GBP (approx. $92 USD).

In other news, the world’s most expensive watch has just been sold at auction for $4.6m USD.