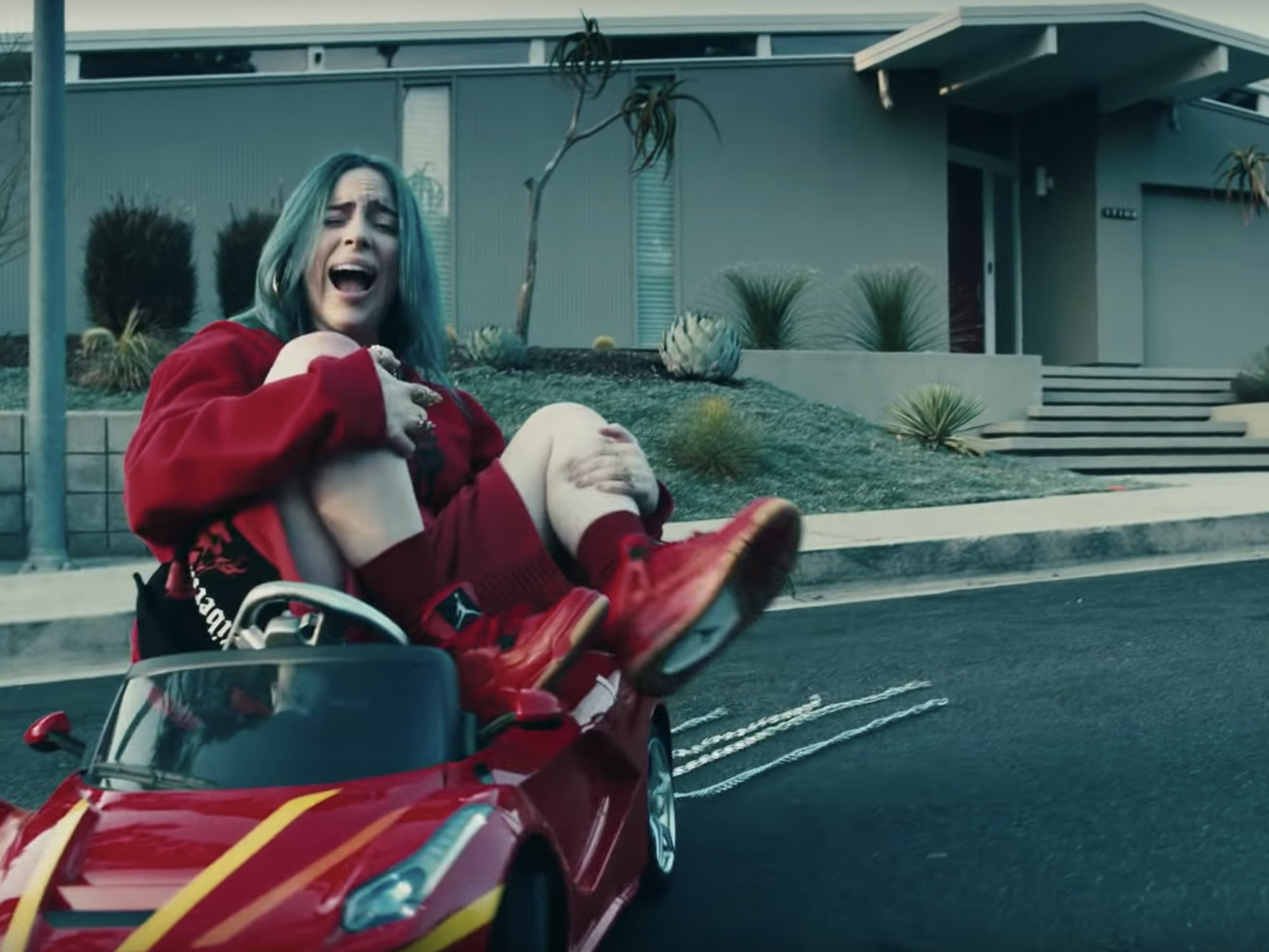 Known as La Nanette, the house is an original “Eichler home,” built in 1963 as part of the historic Balboa Highlands tract in Granada Hills.

While Eilish’s video is the most visible production to have used the residence, it is not the first. Owners Susanne and Michael Hemming estimate they host approximately six to eight productions per year in the home they restored shortly after purchasing it in 2008.

“Hollywood loves the house because of the iconic midcentury modern American architecture,” the couple says via email.

Thanks to Eilish’s explosive popularity—the “Bad Guy” video has more than 163 million views—La Nanette and the Balboa Highlands tract itself have received arguably their biggest spotlight to date. It’s a phenomenon that Joseph Eichler, the developer most associated with bringing the midcentury modern style to residential housing tracts in the postwar era, would have likely embraced.

“He was very clever about how he promoted himself and his houses,” says Alan Hess, an architect, historian, and critic. As Hess puts it, the often-cheeky ads that promoted Eichler’s tracts were geared towards potential buyers who were a shade more openminded.

“They were really catchy advertising, [with] clever simple good graphics using humor in the way that the Volkswagen Bug ads of the time did,” says Hess. “They were appealing to a pretty sophisticated audience that would appreciate the humor of the advertising and also appreciate the style of the modern houses.”

Eichler wasn’t the only builder during that period to bring the modernist aesthetic of the custom Case Study houses and Southern California’s Googie coffee shops, gas stations, and motels to middle-class housing developments. But he’s most often credited with being the progenitor of that trend thanks to his promotional savvy and his dedication to hiring quality modern architects.

“His first houses were nothing special,” says Hess of Eichler, who began building tracts in the San Francisco Bay Area via his company Eichler Homes beginning in 1949. “But then he got this idea of really using modern architecture to distinguish his product in the marketplace. And he hired the right architects. So from the early ’50s is when he really started doing what we now call Eichler houses.”

The Balboa Highlands tract was built between 1962 and 1964, a time period when Eichler also built similar developments in the nearby Southern California communities of Orange and Thousand Oaks.

Designed by architects Claude Oakland and the team of A. Quincy Jones and Frederick Emmons, the Balboa Highlands houses feature streamlined facades with three different roofline types, with interiors distinguished by the open floor plans, open-air atriums, and post-and-beam ceilings. They also crucially featured an organic indoor-outdoor flow that smoothed the transition from living room to backyard.

“In a standard tract house, they have a backyard, but you would often have to go through the kitchen and the laundry room and out a side door and down the side of the house in order to get [there],” says Hess, who is hosting a tour of the Eichler homes in Orange on Saturday and Sunday in partnership with Preserve Orange County. “But Eichler had just the sliding aluminum door—window walls, basically—so that you would step from the living room directly into the backyard. That’s good design.”

Eichler’s sophistication as a builder extended to his policies around race. Unlike other developers of the time, Eichler refused to enforce discriminatory housing covenants. As noted in a 1997 Los Angeles Times article, Balboa Highlands was one of the first developments in the San Fernando Valley to open its doors to black residents:

“Houses in his Balboa [Highlands] development in Granada Hills were the first Valley homes outside Pacoima open to African American buyers. The neighborhood that developed there was a vibrant mix of white and black professionals. Religious groups, including Jews, Catholics, Mormons and others who were typically excluded under then-legal racial covenants, also bought homes there.”

Eichler’s progressive politics aside, his homes certainly weren’t for everyone, particularly in the rather staid postwar era.

“These Eichler homes… [were] definitely an acquired taste,” says Tommy Gelinas, founder and curator of the Valley Relics Museum in Van Nuys. “But sure enough, all these years later, they’re one of the most sought-after.”

The Balboa Highlands tract came near the tail end of Eichler’s storied career, which would flame out following a move into high rise apartments that quickly led to bankruptcy for the Eichler Company. Though he would continue building houses until his death in 1974, Eichler’s career never fully recovered from that devastating loss, and for a time his contributions as a developer were all but forgotten.

“There was a time when the Eichler houses were forgotten and neglected, and only a few people knew of them or appreciated them,” says Hess. “And they were actually, many of them were modeled or altered in various ways. But they’ve come back, definitely, in the last 20 years or so in popularity. And obviously with this video, still [have] a popular appeal.”

One person who never forgot about the Eichler homes was Gelinas, who grew up in a much more traditional house in the adjacent Porter Ranch neighborhood but often visited friends who lived in Balboa Highlands.

“I was always fascinated with them,” he says. “The homes I grew up in were kind of your standard three-bedroom, four-bedroom home.”

Gelinas is familiar with Eilish by virtue of having an 11-year-old daughter, but for him, the “Bad Guy” video resonates in an entirely different way.

“For a lot of years, the San Fernando Valley has been kind of like the butt of a joke,” he says. “For some reason, there was always this [attitude of] like… ‘Oh, the Valley sucks.’”

But in featuring the Balboa Highlands tract, Eilish’s video has (almost certainly unintentionally) served as a springboard to discussing the region’s rich architectural history by offering Eichler’s homes arguably their biggest visibility to date.

“It shines a light on the San Fernando Valley,” says Gelinas.