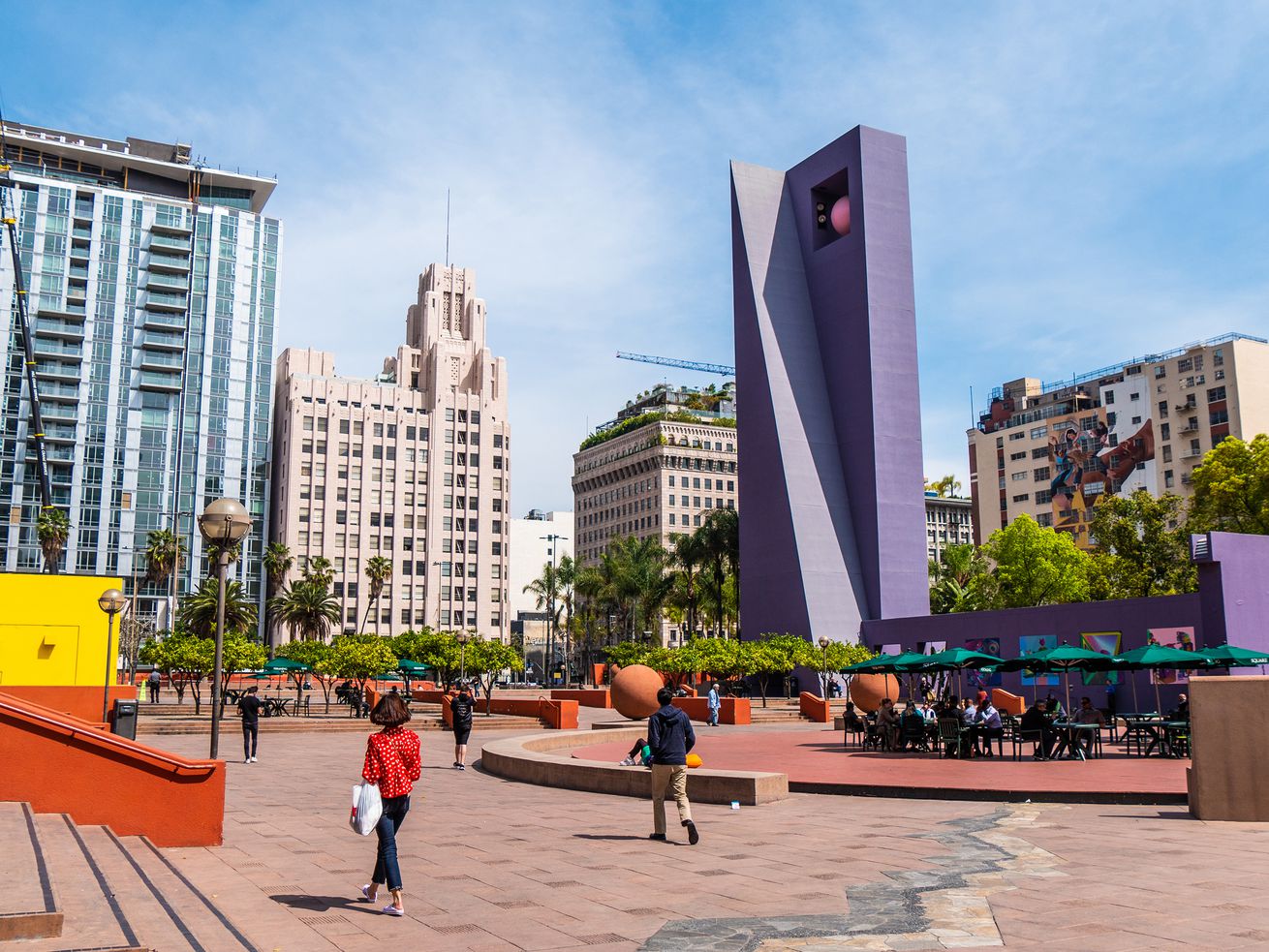 Three years ago in May, a plan created by the French landscape architecture firm Agence Ter to transform Downtown’s Pershing Square into a more open, inviting, and accessible space was selected by the city as the vision that would reshape the much-maligned public park.

But there’s been silence ever since.

The general manager of the parks department says the city is still moving forward with the project, but it will now be rolled it in three phases—with the first two bringing only modest upgrades—and there’s uncertainty about when the biggest changes will actually happen.

“This project needs a civic champion,” says Lauren Hamer, director of Agence Ter LA, the Los Angeles office that the firm opened in 2016.

The original plan envisioned flattening out the park and putting in an expansive “great lawn.” A number of gardens would dot the block, and renderings showed clusters of tall trees creating shadier, greener public spaces.

Now, the first wave of work would involve demolishing the purple wall along Olive Street, replacing the always-broken escalators to the parking garage with elevators and stairs, and removing the boxy yellow building along the street. It is the only phase with full funding.

“It’s a modest improvement, but it’s extremely important,” says Michael Shull, general manager of the city’s recreation and parks department, which owns and operates Pershing Square. Especially where the escalators are concerned, he says, “we simply cannot wait on these things any longer.”

Shull says his department requested that the first wave of adjustments be done in two phases in order for the underground parking garage, which generates millions of dollars in revenue annually for the recreation and parks department, to remain open during construction.

Even when the first two phases are complete, they will not amount to the full-on, big project that won the competition, says Debra Gerod, partner at planning and architecture firm Gruen Associates, which is part of the team including Agence Ter that is working to redesign the park.

Phase three would be where the big structural changes would happen, Gerod says, like making alterations to how cars enter and leave the underground parking structure, and taking out the terraces and steps in the park now and replacing them with a lawn, big trees, and a pergola—transformative elements that appeared in the competition-winning design.

Phases one and two, projected to cost $21.7 million, will be about making smaller changes and “taking down as many barriers as we can,” including large walls, that purple tower, and visual barriers between sidewalks and the park.

Changes in these first two phases, though not dramatic, “would start to indicate the direction we’d be going with the park ultimately,” says Gerod.

Although phase three is not funded and is “the fuzziest [phase] for sure,” Gerod says phases one and two are intended to be a starting point, not a stopping point.

Shull agrees. “We haven’t given up on the large scale project” that won the design competition, he says. And doing something small rather than waiting to try and get the full, ambitious design built is additionally important so that people can see that recreation and parks “is serious about rejuvenating and renovating Pershing Square,” Shull says.

Gerod and Shull also hope that the initial alterations to the park would also serve as a kind of proof of concept, attracting donors to the larger and more expensive vision.

The first phase is funded by a mix of revenue from the parking garage and park and public benefit fees paid to the city by developers. It’s estimated that the “full big buildout will cost “around $100 million, if not greater,” Shull says.

According to a March presentation Shull gave to the city’s recreation and parks commission, phase one would get underway in fall 2020. The schedule for phase three just read “TBD.”