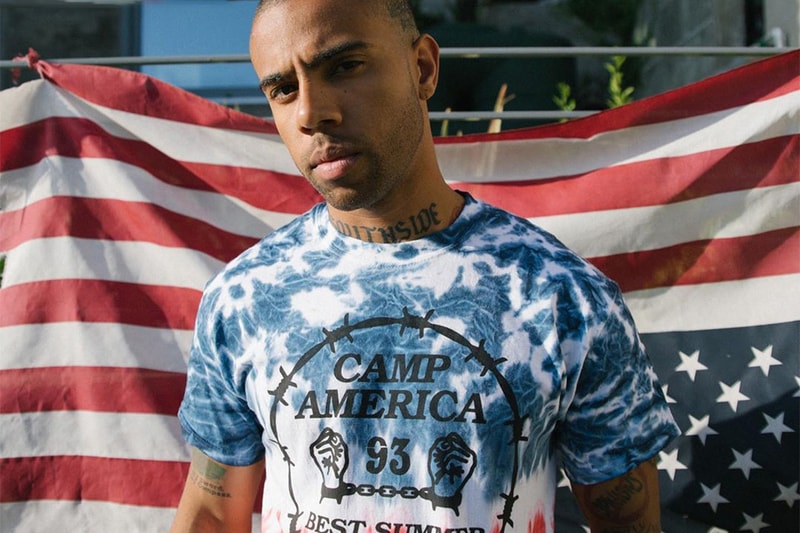 Represent has partnered with Vic Mensa and 93PUNX for a “Camp America” charity tee in support of Kids In Need of Defense (KIND). Mensa and his band 93PUNX recently released a song and video for the single entitled “Camp America,” which was a response to the increased ICE crackdown and comments from ICE Deputy Director Matthew Albence that compared immigration detention centers to summer camps.

The design of the t-shirt stays true to the provocativeness of the single, harboring a print toting barbed wired and chained hands. “Camp America” marks the front in bold, with “93” on the back representing the band. The t-shirt further utilizes a blotched tie-dye interpretation of the American flag. All proceeds from the campaign will be donated by Mensa to KIND, “an organization dedicated to ensuring the safety and freedom of unaccompanied immigrant and refugee children in the United States.”

The collaborative tee can be viewed in the gallery above, and if you’re interested in picking one up head over to Represent’s web store where they are priced at approximately $30 USD.

i made this camp america shirt in collaboration with @supportkind to provide legal defense for kids at the border • after being in Tijuana last week i can honesty say there’s no way to fully grasp the magnitude of the situation without looking in these kids innocent eyes • they are the real victims, drop a couple bucks & help those in real need • every dollar goes to the cause • link in bio