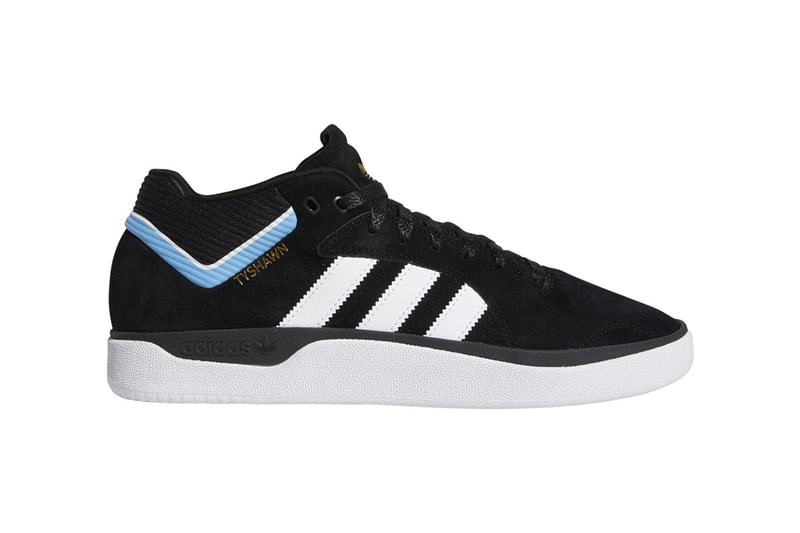 Following closely after the release of Tyshawn Jones’ money green pro model skate shoe from adidas, the team has dropped a black-out colorway as a more understated option.

In case you’re new to Jones‘ silhouette with adidas, the skate shoe was developed by Jones and former pro skater Scott Johnston, who later became a footwear design director. Of course, the pro model was built and tested by none other than Jones himself, proving its rightful status as a pro model.

Design-wise, the silhouette hasn’t changed from the two previous white and green releases, retaining the basketball-shoe-inspired aesthetics. With this colorway, the upper is dressed predominantly in a deep black, with the Three Stripes logo and bottom sole in pristine white, casting a striking contrast. The white extends up to the collar of the shoe and wraps around to the other side, accompanied by a thicker pale blue bar giving the sneaker a dash of color. As with its previous models, the current release also features an Adituff reinforced toe, EVA midsole, an inner vulc wrap, a PU molded sockliner, and a memory-foam tongue for increase comfort, performance, and durability.

For the skateboarders out there interested in copping a pair of these Tyshawn Jones x adidas pro model skate shoes, they’ll be available August 10 over at adidas’ online store for a retail price of $85 USD.