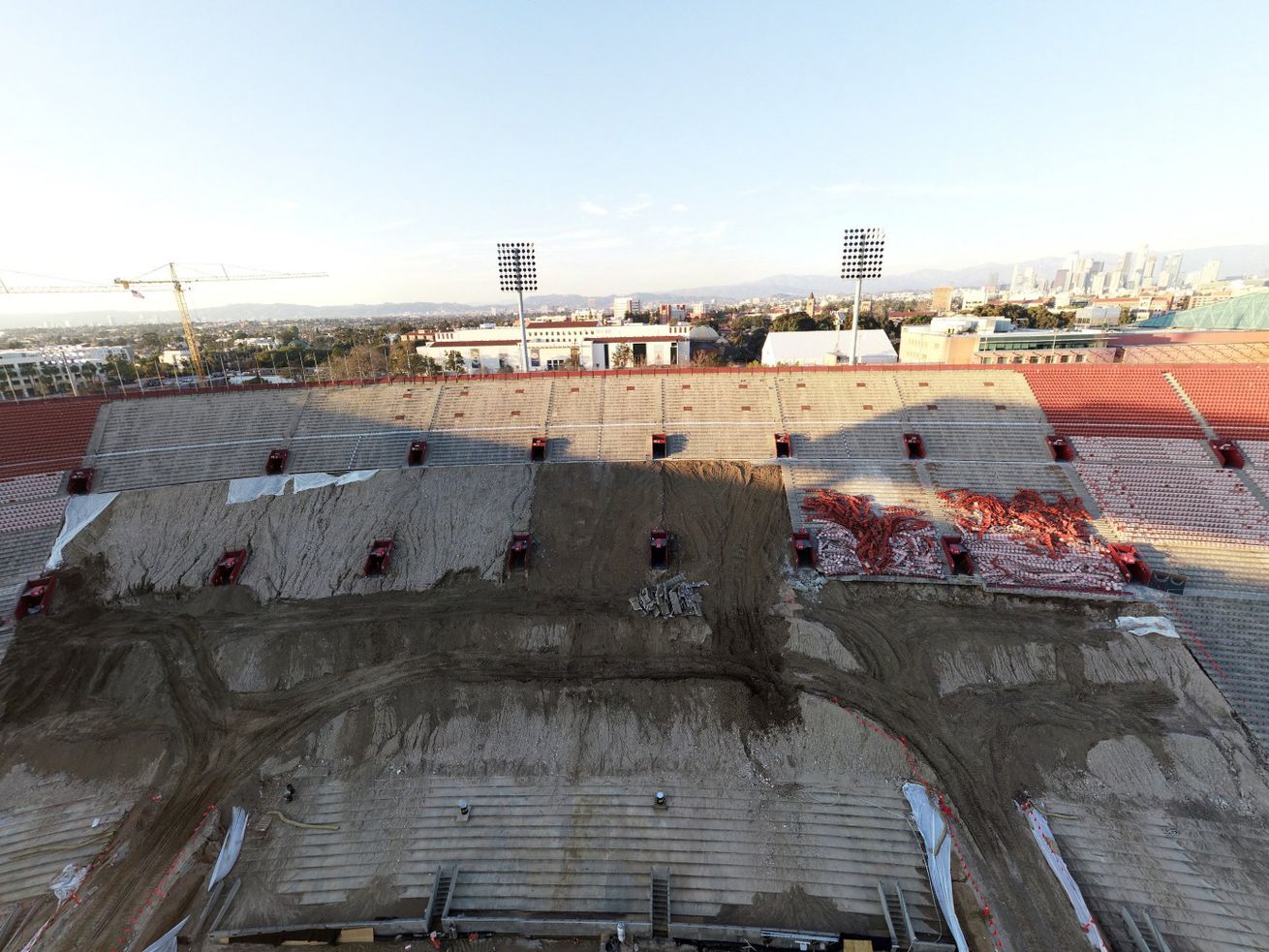 If you were to fly over the Los Angeles Memorial Coliseum today, it might look like the venue is being disassembled. Many of the seats have been removed and an entire segment of concrete seating has been pulled out, exposing the dirt beneath. On the field, where green sod used to be, there’s dirt and heavy machinery.

But it’s all part of the plan as the 96-year-old stadium barrels toward the completion of what will be an 18-month renovation.

Work has to be completed in time for the stadium to host the Rams’ preseason opener this summer. To ensure that it is, two cranes and 350 workers are plugging away up to six days a week, says Jeff Moe, USC senior project manager.

One of the most notable results of the renovation will be fewer seats, as the 93,000-seat venue slims down to seat about 77,500.

But the $315 million renovation will also add features, including new seats and Wi-Fi, that will make it easier for the venue “to compete in the marketplace” that includes the Rose Bowl in Pasadena and the flashy new NFL stadium under construction in Inglewood, says Dan Stimmler, chief operating officer of the Coliseum.

The new Scholarship Tower, which will rise seven stories at midfield along the southern part of the stadium, is a big part of staying competitive, says Stimmler. The tower will contain new food offerings, premium seating, press boxes, a rooftop lounge, and 24 high-end suites that are available on 20-year terms for upwards of $7.5 million—each. All but one is sold.

Stimmler says revenue from the suites has funded the upgrades. Also helping to pay for the renovation is a $69 million deal USC struck with United Airlines to sell naming rights to the stadium, which will officially become in August the United Airlines Memorial Coliseum.

Initially expected to cost $270 million, the renovations have gone over budget. USC has attributed the overages to increased labor costs associated with needed to meet the project’s inflexible deadline.

“A lot of the decisions that were made… are because, unlike other buildings, we have a firm completion date because you have football scheduled for the fall,” says Stimmler.

Once the renovations are complete, the 1923-built Coliseum will host games for USC and the NFL (at least, until the Inglewood stadium opens). It will also play a role in the 2028 Olympics, hosting track and field events as well as the closing ceremony for the games.