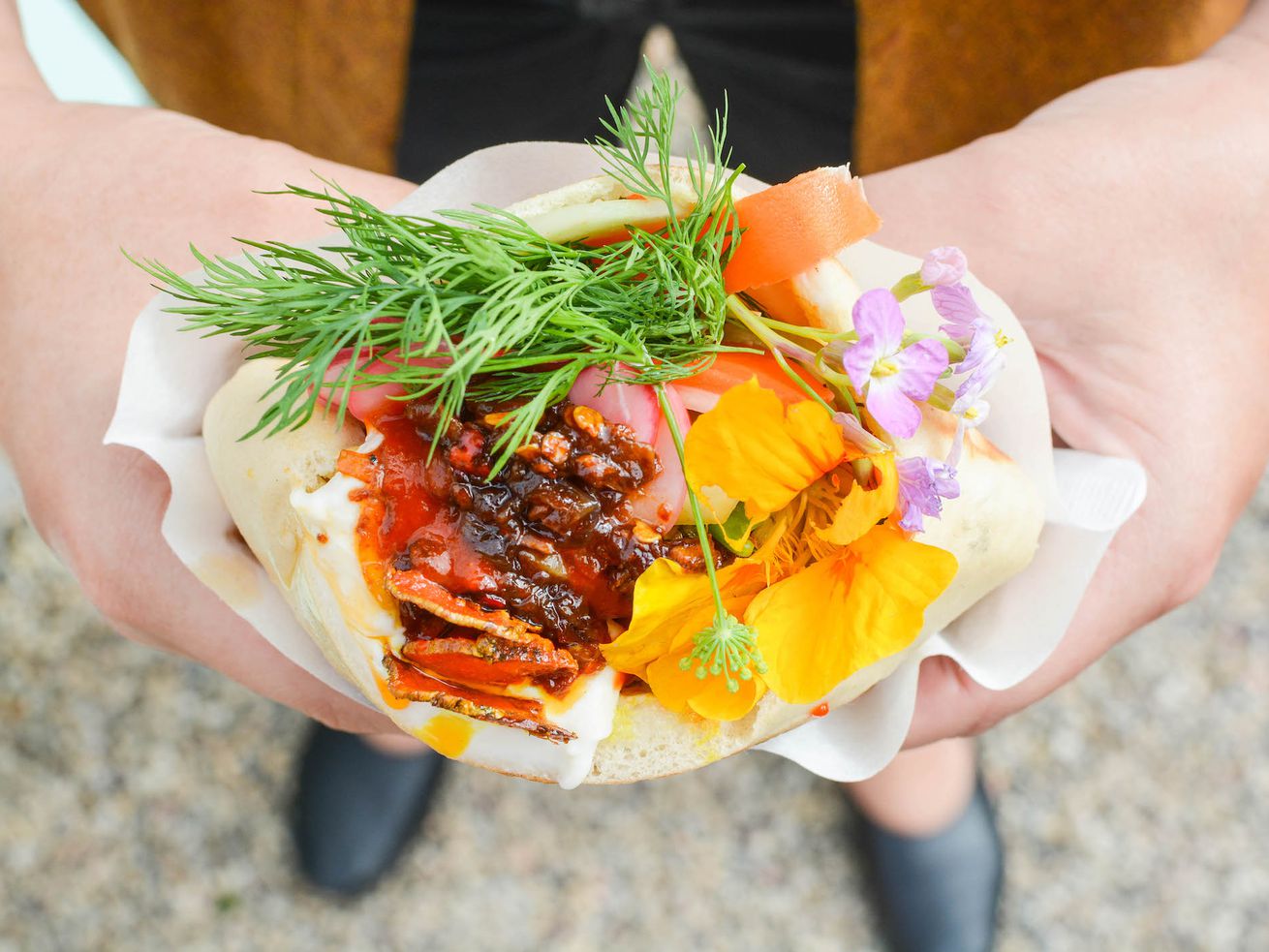 Every Wednesday morning beginning at 8 a.m. until she sells out, chef Zoë Komarin of Zoë Food Party throws a pita party behind Collage Coffee in Highland Park. The good news is that everyone is invited. Just look for the sign leaning on the pebbly alley to the right of York Boulevard coffee shop and keep going until your eyes land on the curly-haired Komarin. She’ll be there waiting, flanked by her cooking fort of a camping stove, makeshift table garden of freshly foraged edible flowers, and stack of bamboo steamers protecting her precious, drool-provoking pitas. They’re the real stars of this whole shindig.

Komarin’s pitas are fluffy, chewy, and the ideal pocket partner to the ingredient combos she stuffs into them. And even though she switches up the flavors ever week, it’s guaranteed to be delicious. Just ask anyone who faithfully shows up on Wednesday mornings in Highland Park. One week Komarin will whip up some labneh with marinated Anaheim peppers, dilly scrambled eggs, cilantro, cardamom schug (a hot sauce originating from Yemen), chunky carrot salad, and mustard greens. And the next week, she might serve up an egg banh mi-style pita with sriracha mayo, pickled veggies, dill scrambled eggs with fresh turmeric chips, and her very own “thunder sauce” (a vegetarian XO sauce).

But Komarin’s pita parties go way beyond the $10 pita sandwiches. She wants her pop-up experience to highlight her favorite ghost ingredient — human connection. “I’m trying to get people to get loose, to get funky. Maybe they wander in and are tickled by the energy of the space, the table, the food itself. Maybe they hang out and meet new people while hunched over a messy pita. If people feel awake and present while they are at my food party, then I have done what I came to do,“ says Komarin.

Part of the experience includes Komarin’s ‘90s Rugrats-esque hand drawn merch (matches, VIP cards and signage). “I grew up in the suburbs of New Jersey outside of New York City, in a super creative household in which every surface was free game for painting, drawing, or doing clay on. I was always a curly mess Garbage Pail child with gum in my hair or chocolate ice cream on my face,” she says.

Komarin sees feeding people as an artistic endeavor, which is why she didn’t follow a traditional path into the food world. She taught herself out of survival while finding herself broke in Brooklyn. It was when she started feeding her friends and catering parties for people like “Sex and the City” creator Candace Bushnell, that she realized she had clicked into something, by accident. “After you fall into something like that the training comes naturally because it’s all you want to do or work on. I became convinced it was my calling to cook food long before I truly knew what that meant.”

But Komarin’s tireless pursuit of the perfect pita recipe didn’t start until after a seven-year stint in Tel Aviv, Israel. She says a last minute birthright trip to Israel changed her life in so many ways. She met her number one fan, her husband Udi, and started working as a chef at the popular Café Xoho. There, Komarin focused on troubleshooting bagel recipes to satisfy an expat demand because pitas were aplenty. But she says the reverse happened when she moved back to the States, where she had the bagels but not the pitas.

Her desperate craving for the chewy pitas she could so easily buy in Tel Aviv pushed her to chase perfection in her pita recipe. “Once you know the potential of a great pita as the ultimate sandwich vessel it’s hard to compromise. It was inevitable that I would start experimenting. 10 days of two batches a day was the real crash course that unlocked the secrets for me or the legend of the hidden temple if you will,” says Komarin.

Komarin sets up every Wednesday for the rest of May, starting at 8 a.m. until sold out. For future pop-ups, follow Komarin on Instagram at @ZoeFoodParty.