No other American city was so utterly remade by the 1960s as Los Angeles.
Famously cavalier about torpedoing its past to make way for a fuzzily conceived future, L.A. was the perfect conquest for thousands of rampaging baby boomers wresting the cultural agenda through sheer preemption. During its golden rock and roll era of the mid- to late ’60s, L.A. saw some of its most venerable commercial districts, from Venice to the Sunset Strip, yanked into the here and now by covetous boomers remaking the city in their purple-hazy image. The moment peaked and passed in 1969, as the twin shocks of the Rolling Stones’ disastrous Altamont concert and the Manson murders in Los Angeles shook the flowers out of everyone’s hair, a watershed captured in native Angeleno Quentin Tarantino’s just-released Once Upon a Time in Hollywood.

“Quentin very much wanted it to be actual, not CGI,” says Barbara Ling, the film’s production designer. “We went to great lengths to make sure that you felt immersed in this year.” The production fabricated period-accurate marquees of the Vogue and Pussycat theaters and retrofitted them to the existing buildings on Hollywood Boulevard. The 1969-vintage psychedelic facade of the Aquarius was painstakingly repainted over three days. “People kept saying to us, ‘Please, can’t you leave them up?’ “ says Ling. “We said, We can’t. They’re just facades!” 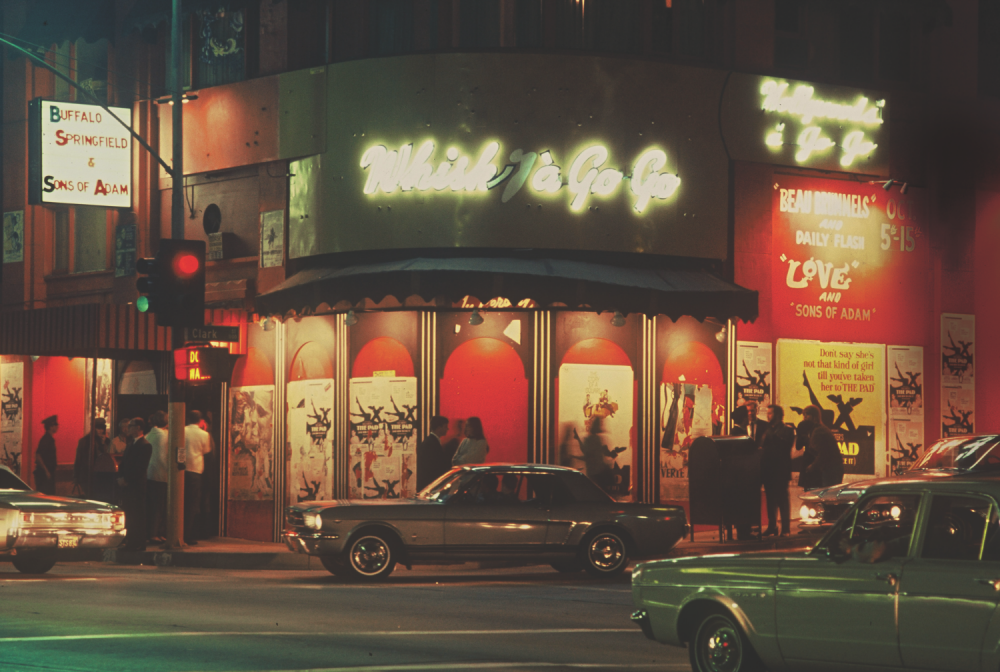 Goin’ to a Go Go
The famous Whisky a Go Go, which opened in 1964, was conceived as the American equivalent of a chic Parisian discotheque. Johnny “Secret Agent Man” Rivers was the house act. By the late ’60s the club had been co-opted by hippies who converged on the Sunset Strip, and the bandstand reflected their tastes: the Doors, the Byrds, and, on the marquee this night, Buffalo Springfield and Love, L.A.’s trail-blazing mixed-race band fronted by Jimi Hendrix influencer Arthur Lee. 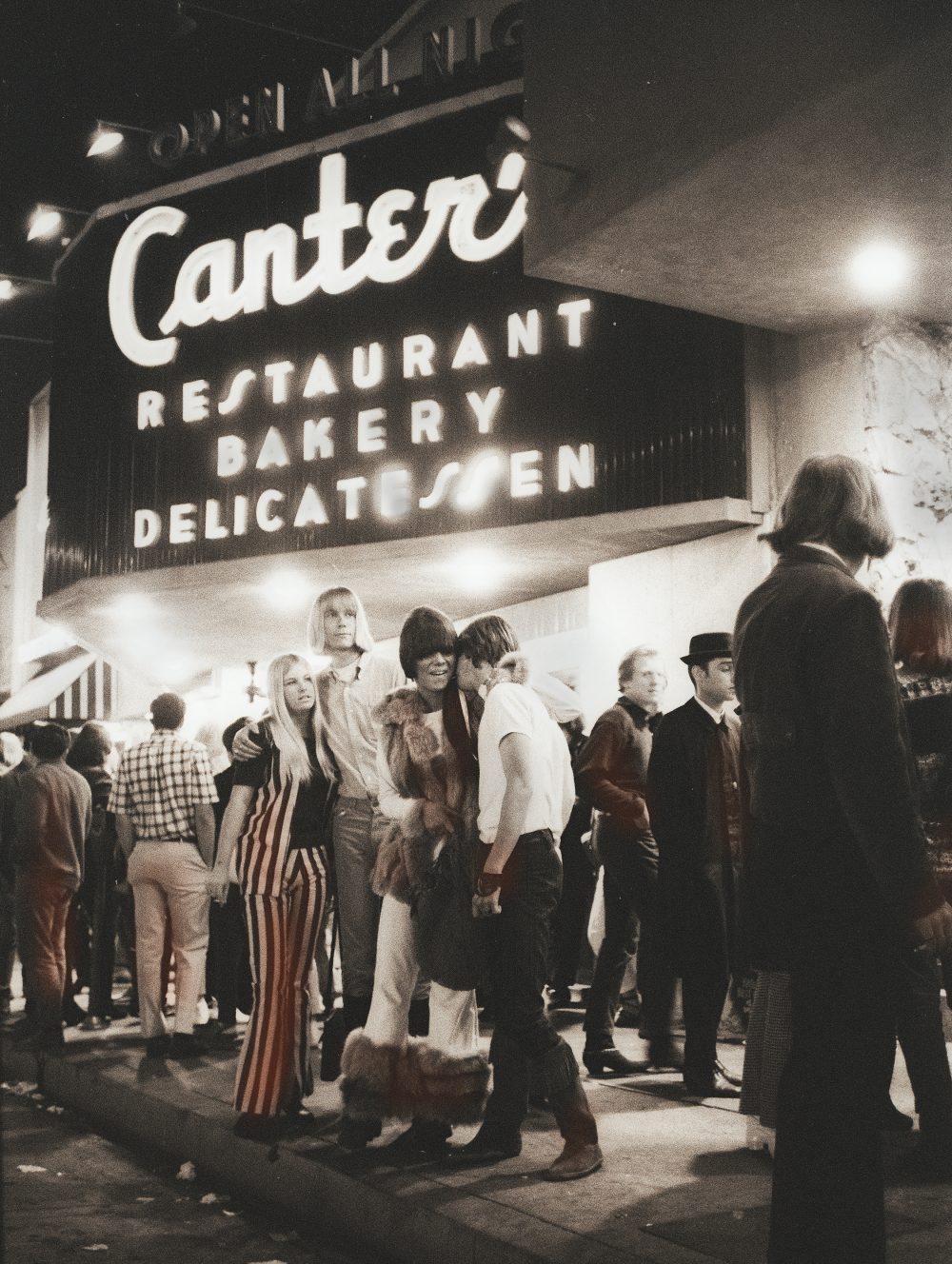 Pastrami on High
Unrelenting police harassment drove hippies craving after-hours nosh away from the Sunset Strip and into the arms of Canter’s. This Fairfax District landmark was one of several traditional L.A. establishments that shrewdly tolerated the longhairs suddenly swarming the streets. And rubbing elbows with Janis Joplin in the Kibitz Room was the sort of delicious irony that hippies savored. 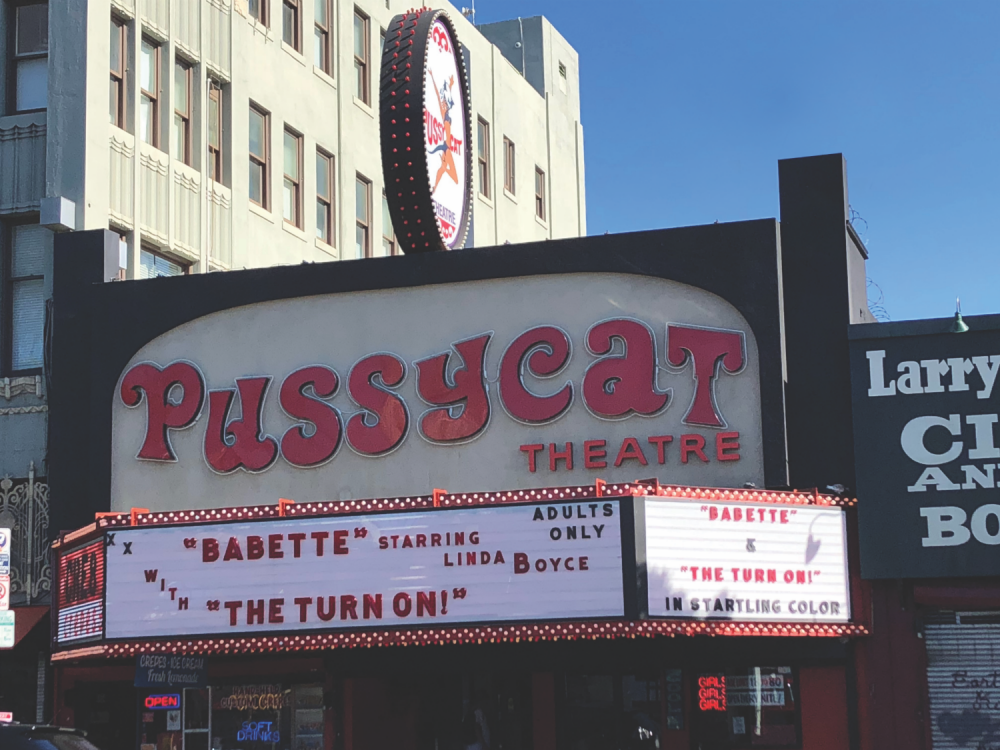 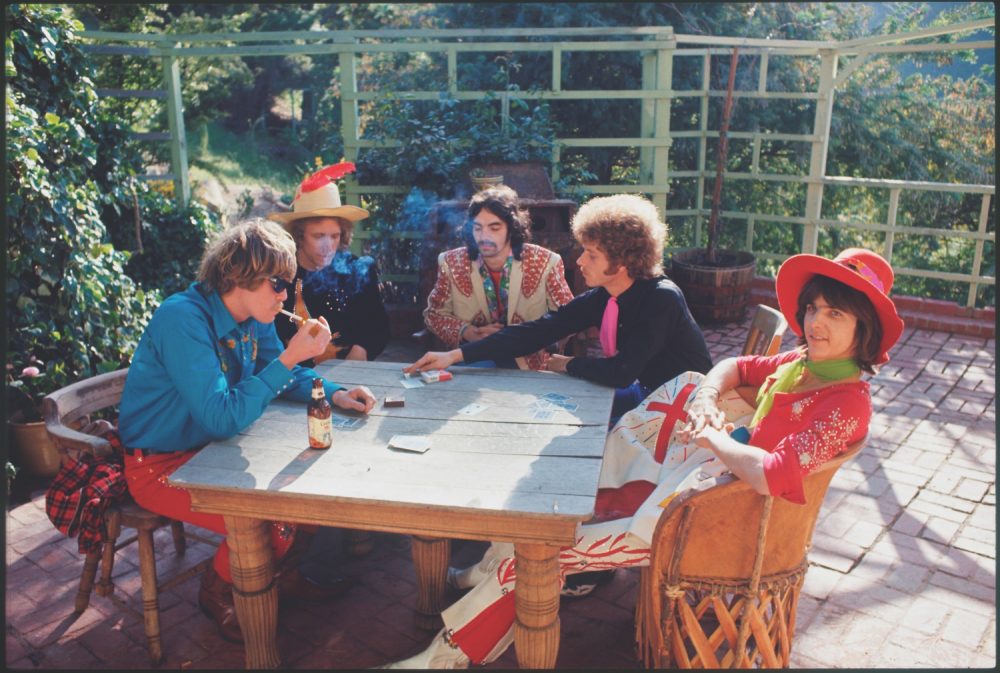 Hot Burritos
The epic cross-pollination of musicians living in and around Laurel Canyon gave the world Crosby, Stills & Nash (David Crosby from the Byrds; Stephen Stills from Buffalo Springfield). So it was with the Flying Burrito Brothers, which comprised ex-Byrds Michael Clarke, Chris Hillman, and the benighted Gram Parsons (far right), who died of an overdose at age 26. 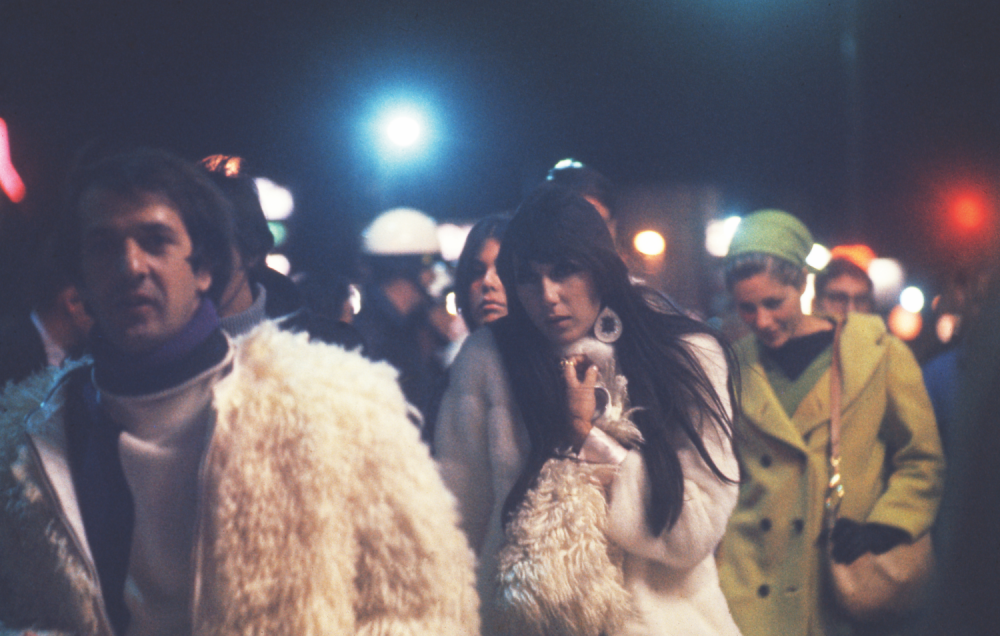 They Got You
There was a moment in the 1960s Los Angeles Youth Quake when the street cred of musicians could still deliver or destroy a career. Before they cashiered their equity with hippies by starring in an unctuous network variety show, Sonny and Cher marched in solidarity with protesters seeking to end police harassment on the Sunset Strip. 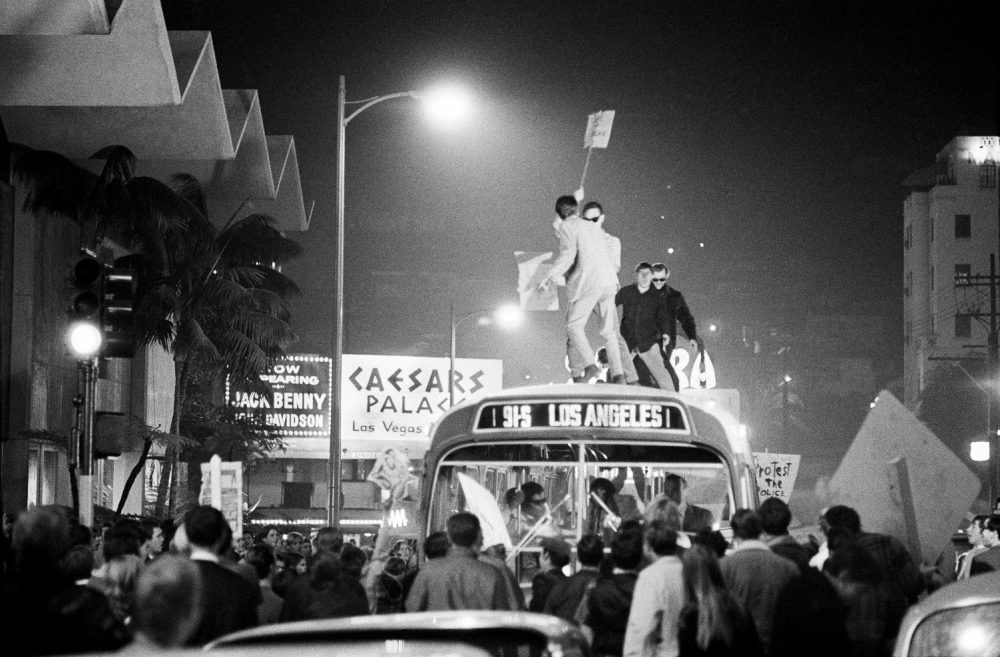 For What It’s Worth
In an attempt to restore the Sunset Strip to its 1950s somnolence, stringent curfews set the stage for one of the first culture wars of the 1960s, as enraged longhairs fought a series of bloody battles with police, inspiring Stephen Stills to pen the Buffalo Springfield classic with its trenchant verse, “There’s a man with a gun over there/telling me I got to beware.” 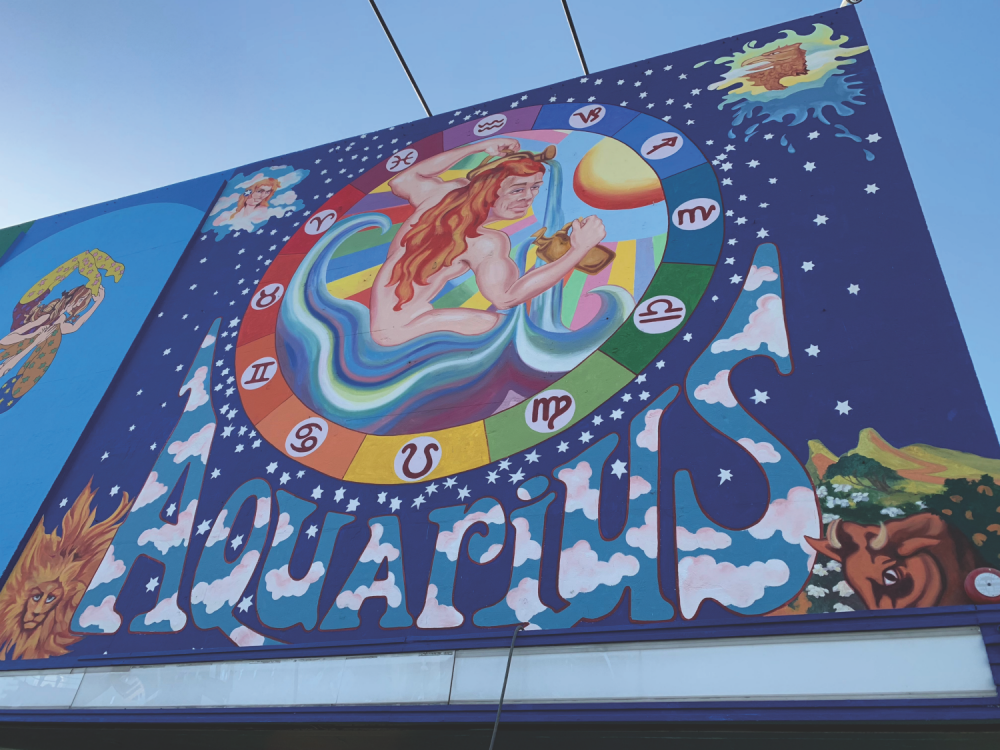 Sign of the Times
Built in 1938 as the Earl Carroll Theatre and recently home to Nickelodeon’s studios, the Aquarius was another example of a faded venue reincarnated as L.A. nightlife shifted from supper clubs to rock and roll. The 1969 vintage astrology-on-acid facade was painstakingly re-created on site for Tarantino’s Once Upon a Time in Hollywood. 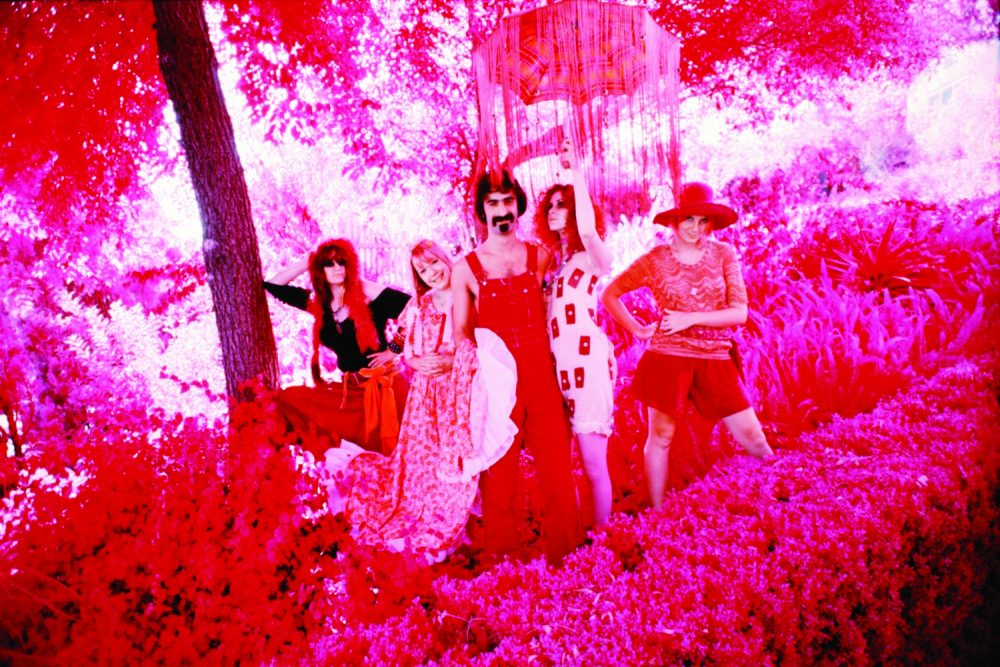 Freak Out
Retinues of attractive young women in thrall to charismatic young men were everywhere in L.A. in the late 1960s. But unlike the malevolent and murderous Charles Manson, Frank Zappa became the bemused patron of the GTOs (Girls Together Outrageously), the whimsical groupie clique that he employed in various capacities at his Laurel Canyon compound (Miss Pamela, second from left, later penned a best-selling memoir). In 1969 Zappa produced the GTOs’ Permanent Damage, their first—and last—album.

The post These Images of L.A. in 1969 Capture a Mythical Moment in History appeared first on Los Angeles Magazine.