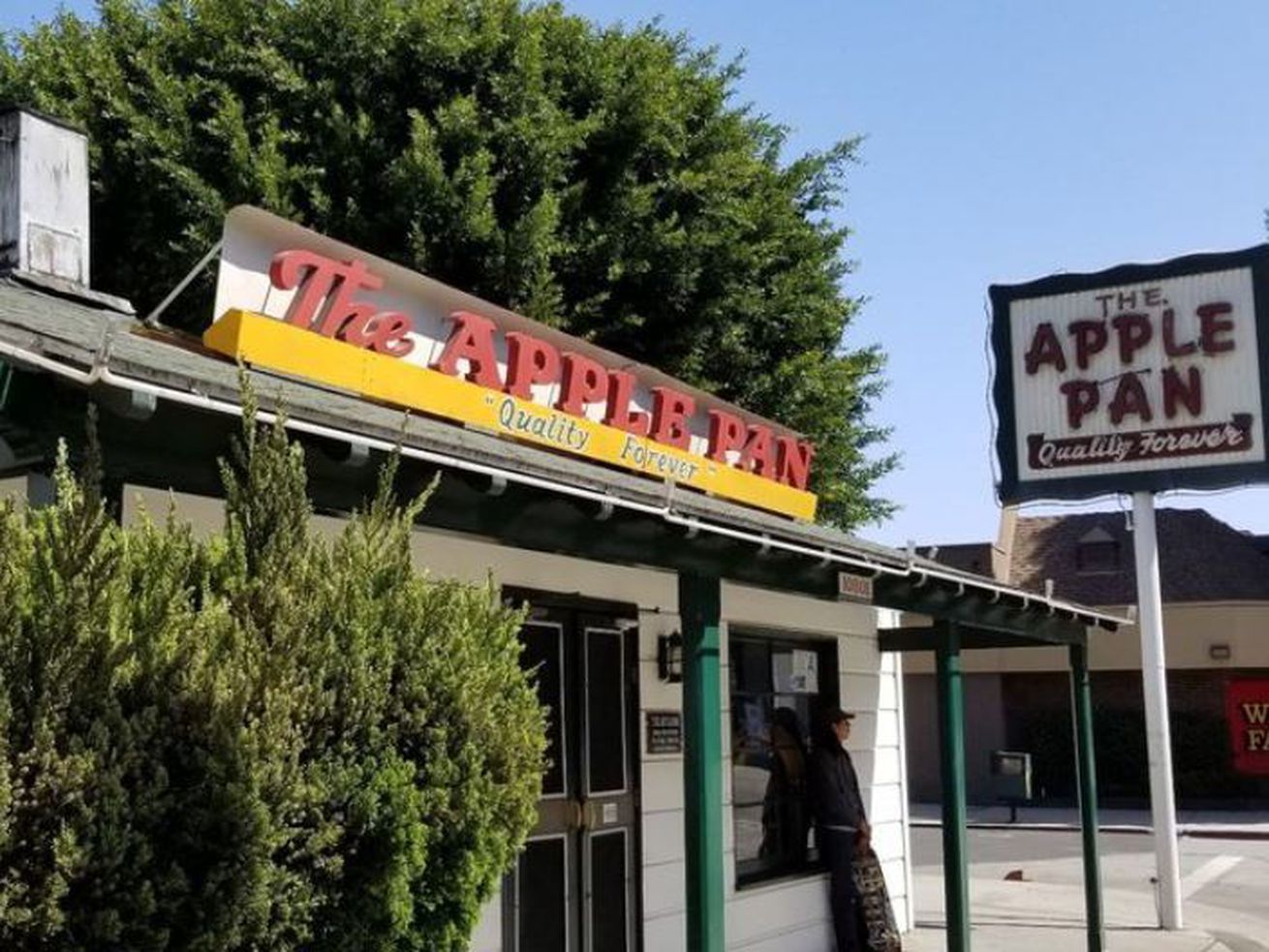 After nearly 72 years of continuous family operation, The Apple Pan gained new ownership this past week when it was uncovered that Shelli and Irving Azoff acquired the beloved burger restaurant. Former owner Sunny Sherman and her mother Martha Gamble sold the West LA diner to the Azoffs in process that was almost too seamless. Originally opened in 1947, The Apple Pan earned generations of fans who frequent the restaurant for its well-seared burgers on plush white buns, old-school pies, and classic counter service. Eater talks to Shelli about how the Azoffs came to own the longtime institution, and their firm belief that nothing fundamentally needs to change, or will change, at The Apple Pan, except for a few small things.

On how they came to find out about the sale of The Apple Pan:

The Azoffs were big fans of the restaurant, often visiting after late nights, awards shows, and music shows at the Forum. Shelli first remembers visiting around thirty years ago and loving everything about it. A friend notified the Azoffs that Sherman and Gamble were interested in selling the restaurant for the first time ever. The Azoffs met with Sherman and Gamble, then had dinner together, where things immediately felt comfortable for both parties. Sherman and Gamble could tell that the Azoffs weren’t interested in changing anything about The Apple Pan. The two big requirements for Sherman and Gamble were that the integrity and quality of The Apple Pan would remain the same, and that the employees would be looked after (as in, they would retain their jobs).

The Azoffs did their due dilligence, making sure that the business was profitable (which it was), and felt the price was fair. There wasn’t even a lengthy negotiation process in terms of the price — both parties agreed to it and made the deal.

On Shelli and Irving Azoff’s background in restaurants:

The Azoffs used to own the Southern California franchise rights to the Five Guys burger chain but did not operate any restaurants, eventually selling the rights back to the company. However, as the managing partner of the Forum, one of Shelli Azoff’s responsibilities was finding the food service partners, which includes Boo’s Philly Cheesesteaks, Carney’s, Loteria Grill, and Pink’s Hot Dogs, among others. She was also involved with the experience and food at the Forum Club, a VIP venue. Finally, the Azoffs are in the process of acquiring the storied Jewish deli Nate n’ Al in Beverly Hills.

On what the Azoffs plan to change about The Apple Pan:

The Azoffs assert they will not change the quality of the food nor the status of the employees, but they will make a slight adjustments to the service and experience. First off, the longtime cash-only business will finally accept credit cards. “That just makes it easier for everybody,” says Shelli Azoff. In addition, they would like to add some benches outside for people waiting for seats. Also, because the famous vinyl-wrapped seats at the counter tend to get wobbly, she wants to figure out a solution to make them feel a bit more stable.

They will take a look at scheduling to make sure that the workload is more manageable for the employees. With that in mind, Shelli Azoff says they could explore potentially opening The Apple Pan on Mondays, for which the place was famous for always being closed.

Once the Azoffs get settled and feel comfortable running a single restaurant, they will consider the possibility of expanding The Apple Pan to other locations as well as a food truck.

Azoff said she always orders the hickory burger with cheese and a side of fries. Her favorite pie is the coconut cream.

On preserving the legacy of The Apple Pan:

Sherman and Gamble continue to own the land underneath The Apple Pan, while the Azoffs have a long lease to ensure the restaurant will stay put. The Azoffs purchased the recipes and contents of the restaurant, which means they’ll be tasked with overseeing its quality and operation. According the Shelli Azoff, “the restaurant is ours to keep and protect what they built.”

For a short while, Sherman will advise the Azoffs and teach everything about the operation of the business. Shelli adds, “we didn’t buy the restaurant because we were motivated by finances. Having this institution in our family was important because it’s always been a part of our life. Plus we think it’s really good.” She adds, “We made a promise that we intend to keep. We’d like to keep the small family business alive, and maintain what Sunny and her family spent a lifetime building.”