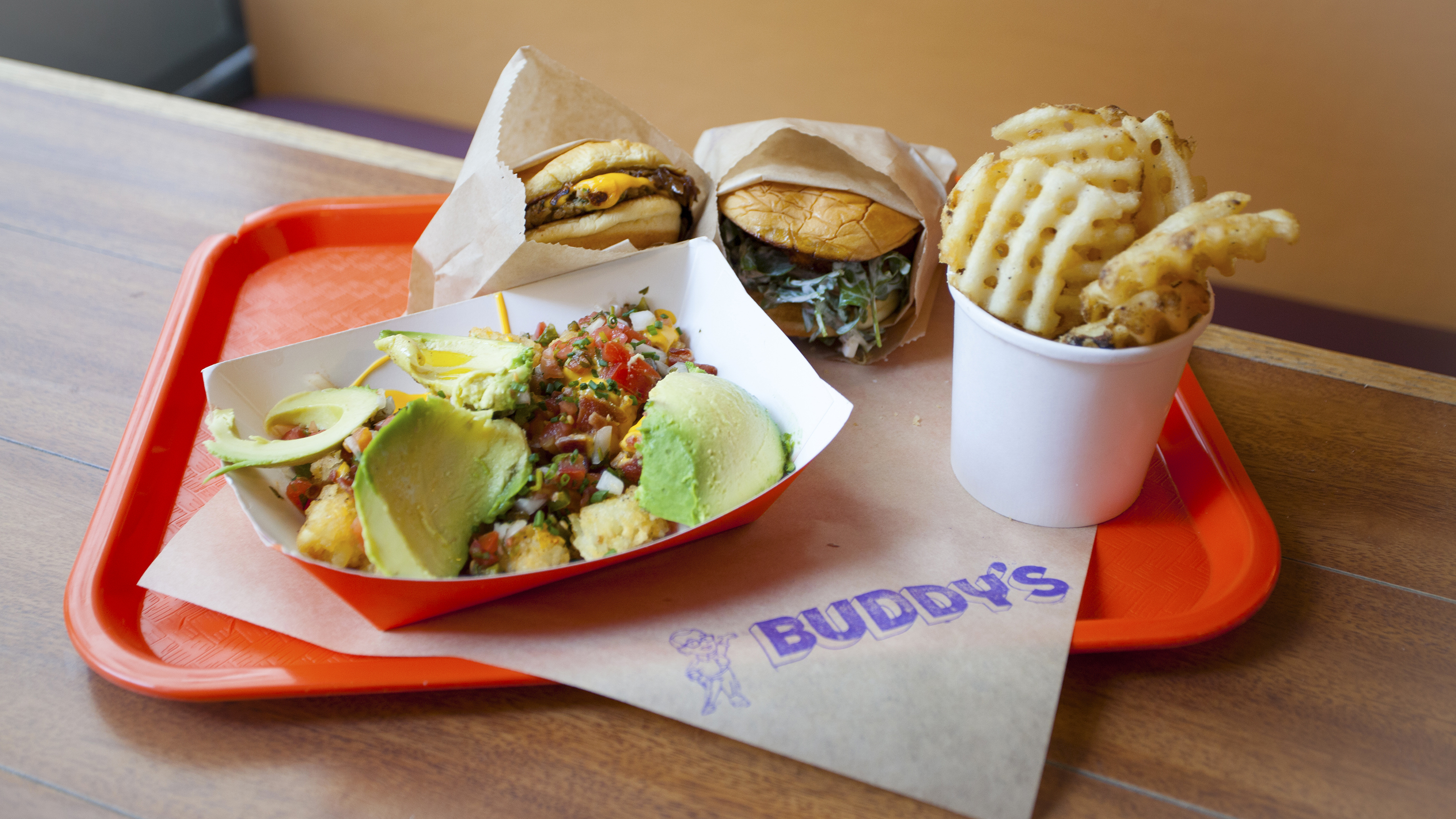 Having one of Downtown’s best bars wasn’t enough for the Bernadette’s team—and we’re so, so thankful for that. On April 1 around lunchtime, the retro vibes and palm-frond wallpaper will make their way next door for the opening of Buddy’s, a new sibling concept that’ll sling burgers, tons of vegetarian options, freshly baked pies and some of the best stoner food the neighborhood’s ever seen.

Just as with Bernadette’s (the funky, kitsch beer and wine bar dotted with vintage toys and midcentury-modern lamps), Buddy’s is bringing the nostalgia, too. But instead of nods to managing partner Jim VanBlaricum’s mom (whose middle name is Bernadette), the Buddy’s space is all about, well, space: VanBlaricum’s father (whose nickname is Buddy) is an aerospace engineer, after all. As such, color-arranged sci-fi books from as early as 1950 sit on color-coded shelves, while photos of an early weather balloon space jump and Apollo astronauts hang over the booths.

It’s meant to be a laid-back ode to nostalgia, and not just in setting. The new venture from VanBlaricum and business partner Michael Hentz, also of Bernadette’s, will specialize in classic American food; it’s the kind of place where you order at the counter, slide into a plastic seat and dig into an American-cheese–topped burger, but a better version than you’d find at a roadside shack. There are waffle fries smothered in cheese sauce, bags of bean-dip–drenched Cool Ranch Doritos, fried pickles with peppercorn ranch, deep-fried hot dogs featuring molten cheese, and patty melts served on locally-baked Clark Street Bread (a neighbor over at Grand Central Market).

Served on bright orange plastic trays, the food at Buddy’s is like a trip into the past—but one where a smashed-thin fried chicken patty gets topped not with strands of wilted iceberg, but a dressing-tossed mound of watercress before getting sandwiched on a potato bun. DTLA Cheese chef Reed Herrick consulted on the menu, lending his expertise to form a streamlined selection of “Main Buddies” (sandwiches and burgers), “Leafy Buddies” (the section of the menu where you’ll find salads both pasta and leafy), “Snack Buddies” (fried pickles and snacky stoner food galore) and “Sweet Buddies” (desserts such as daily pies and house-made oatmeal cream cookies).

The menu is also a haven for vegetarians: a smashburger-inspired hash burger is a fantastic meatless option, made of roasted cauliflower, mushrooms and farro, topped with caramelized onion and American cheese, while other items like the fried green heirloom-tomato sandwich with celery remoulade provide beyond-standard veggie fare. Buddy’s head chef Lucy Dufala is even working on a vegan hot dog recipe.

For now, expect lunch and dinner service, followed by late-night—we’re talking service until 3 or 4am on Fridays and Saturdays—and then brunch and, eventually, weekday breakfast. And while Buddy’s isn’t yet going full-on diner, it’s got some of the trappings. You’ll pay around $2.50 for a cup of Verge Coffee, but if you pay $1 more, you’ll receive a heavy, diner-style Buddy’s ceramic mug to take home. From there, your name is in their system, and any time you want refills on a future visit (even if you forget to bring your mug), you can get them for free after a coffee purchase on the day of your stop-in. When breakfast and brunch initially launch, the team envisions dishes such as a good breakfast burrito, maybe an eggs Benedict and greasy-food diner fare like hash browns with eggs and sausages.

Other down-the-road offerings include beer and wine, plus a stoner-food–focused late-night menu. And, of course, special items for Bernadette’s. Though the two concepts aren’t physically connected, Buddy’s will serve the adjacent bar’s new food menu, and there will be a few unique items available next door: The team is tight-lipped about the specific dishes, but a hint is that Buddy’s does have two pizza ovens in its kitchen. Just putting that out there.

For now, you can stop by Bernadette’s for the bar’s two year anniversary party on Saturday and Sunday, where you can taste a preview of the Buddy’s food you’ll be able to order soon enough.

Catch a glimpse of Buddy’s, below, in anticipation of Monday’s opening—then stop by for some loaded tots for yourself:

Buddy’s opens on Monday, April 1, at 363 South Broadway with initial hours of 11am to 10pm Sunday to Thursday, and 11am to midnight on Friday and Saturday.