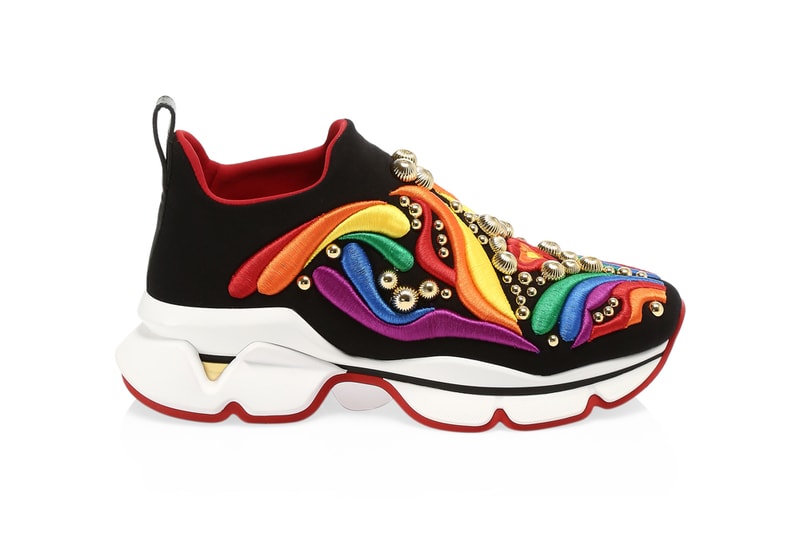 In partnership with the Stonewall Inn Gives Back Initiative (SIGBI) non-profit, Saks has unveiled a capsule collection with pieces from Christian Louboutin, Stella McCartney, Proenza Schouler and more in order to honor the LGBTQ community and the 50th anniversary of the Stonewall Inn Uprising — credited as the "place where pride began." In total, 17 designers contributed to the project to create an assortment of rainbow-colored unisex styles across apparel, footwear, and accessories.

Bejeweled neoprene sneakers, offered in two colorways, and a pair of glittery loafers created by Louboutin make up the footwear in the range. Other collaborators such as McCartney and Prabal Gurung contributed graphic T-shirts and hoodies that highlighted unity, openness and love. Alice + Olivia’s sequin bomber marks a dazzling outerwear option in the range, which features a bright color-blocked design and the word "Queen" emblazoned on the back. Schouler has offered up a vivid top by way of its tie-dye tee, adding a long-sleeved option to the mix. Saks Fifth Avenue Private Label provides some of the accessories in the collection, including dad-style caps and enamel pin sets.

Alongside the apparel, Saks will also launch social media initiatives and special in-store windows. The company will also donate 30 percent of the net proceeds to SIGBI, with a minimum give of $100,000 USD.

Products are priced from $15 USD for the pins, up to $5,495 USD for a Judith Leiber purse. Items will launch beginning May 15 in-store at Saks, as well as the retailer’s website, and will run until the end of June.

For more related news, read up on how Disney will soon host its first official Magical Pride LGBTQ celebration.