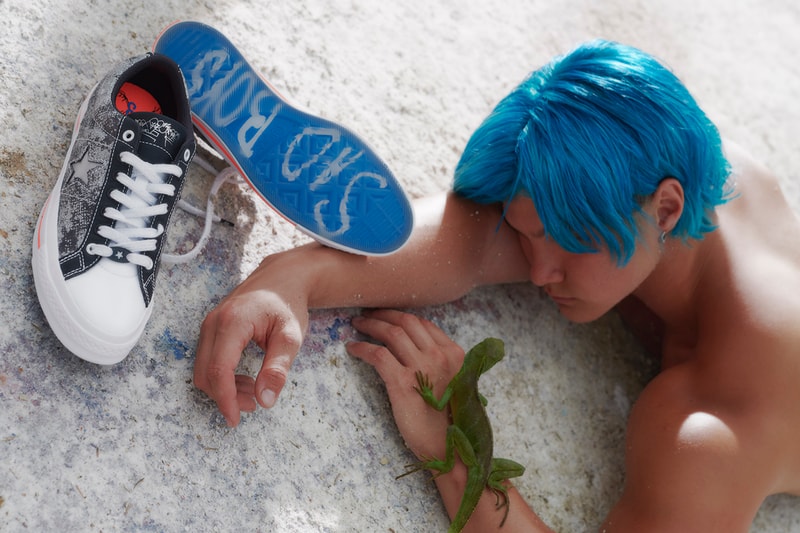 Yung Lean‘s Sad Boys has teamed up with Converse once again for the release of another One Star — this time around enlisting the Swedish creative Bladee.

The 2019 One Star follows on from last year’s highly coveted release at the One Star Hotel — the limited-edition "Toxic" iteration — that sported a black star-adorned suede upper. Yung Lean and Bladee came together to create a sneaker that portrays the world as they see it, that being "troubled, but beautiful." The two are frequent collaborators, having worked together on apparel, recently-dropped music and more.

As a result, this One Star features a black canvas upper with splashes of shimmery silver detailing throughout. Smooth black leather has been used on the eyestay and tongue, with the latter sporting a silver "Wish" sketch created by Bladee. The same sketch is seen on the outsole alongside the Sad Boys logo and is also placed on the sock liner, too.

Other unique touches include a silver iridescent One Star emblem, a white sole unit with orange piping and an orange license plate plaque on the heel, as well as a graffiti-like Sad Boys logo on the rear. White leather is used on the toe box and is continued up the tongue, while white and silver-thread laces (complete with a star-logo lace lock) round off the shoe’s design.

The collaborative sneakers will drop alongside a capsule collection consisting of heavyweight silver-foil printed tee and studded mini backpack on August 29 at Converse.com and Sadboysgear.com. Check out the lookbook in the gallery above.

In other news, Footpatrol and adidas Consortium have teamed up on the ZX Torsion BOOST.