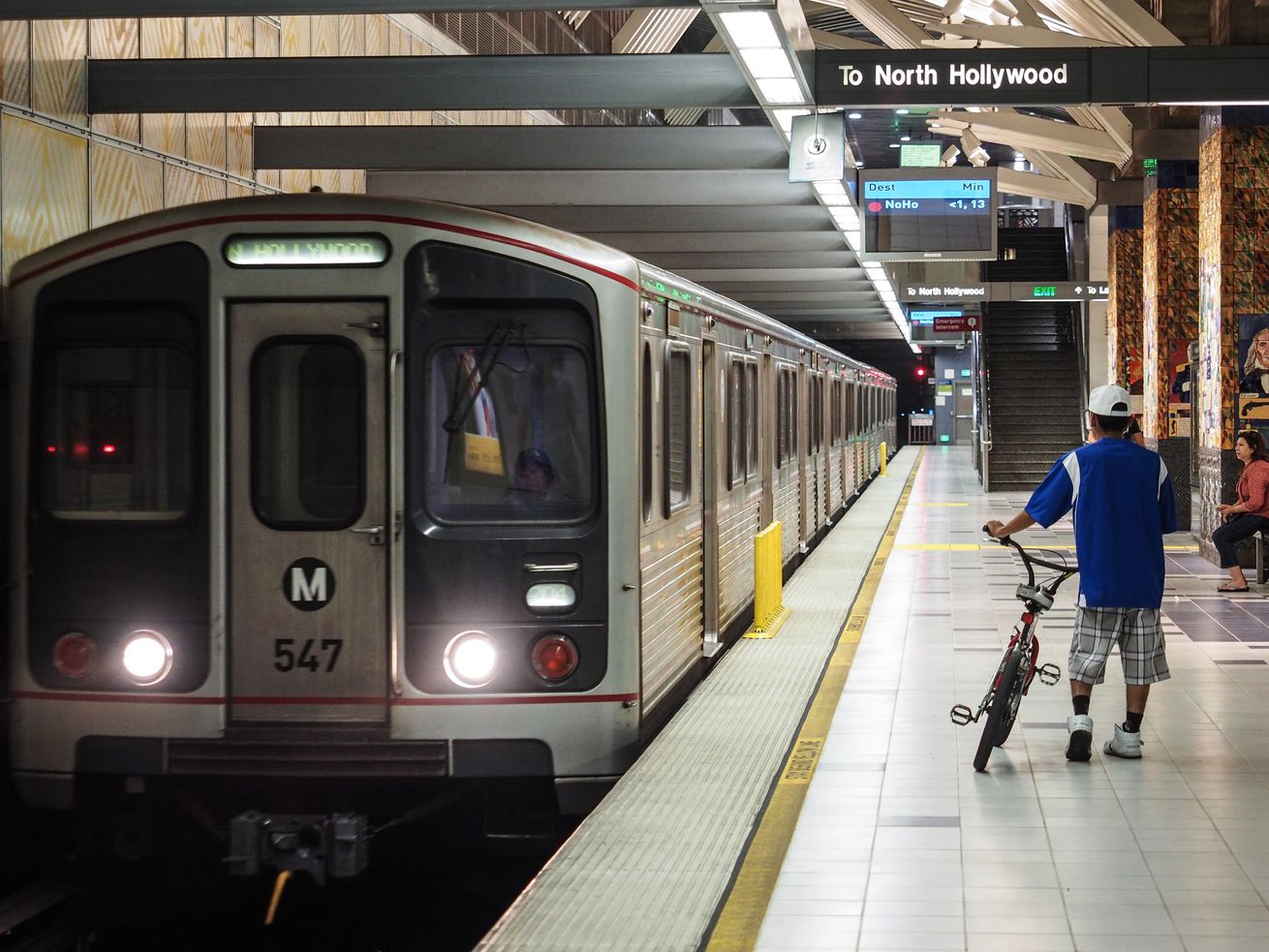 The number of passengers riding trains dipped last year for the first time since 2015, the year before major extensions of the Expo and Gold lines opened, Metro data show.

Metro has been losing customers across its entire system since 2014, primarily due to an exodus of regular bus riders, who account for most of the transit agency’s fare revenue.

Metro spokesperson Dave Sotero tells Curbed that issues affecting ridership in other urban areas have been strongly felt in Los Angeles, including the rise of ride-hailing services like Uber and Lyft. Cheaper fuel prices and a strong economy may have also encouraged more regular riders to drive, rather than take public transportation.

“It’s much more affordable to have a car and fuel the vehicle than it has been in the past,” says Sotero.

For the past two years, as Metro has invested heavily in its train lines, steady increases in rail ridership have helped to offset some of the losses in bus ridership. But that trend reversed course in 2018. Bus ridership fell 3.1 percent from 2017 levels, while rail ridership dropped 4.2 percent, a Curbed review of agency data shows.

Sotero says that delays and “service issues” on older rail routes like the Blue Line may have deterred some would-be passengers in recent years. He also says that the agency expects ridership to increase on the Gold Line once more cars are added to the route in the coming year, addressing overcrowding issues and enabling trains to carry more passengers.

The agency spent nearly $2.5 billion between 2010 and 2016 extending the Gold and Expo lines, which added a combined 18 miles of track and 13 stations to the agency’s growing rail network. But, in 2018, Metro trains carried fewer total riders than in 2012, the same year that the first phase of the Expo Line began operating between Downtown LA and Culver City.

It’s not that the Expo and Gold Line extensions have failed. Though Gold Line ridership dropped slightly in 2018, the light rail route still carries 14 percent more riders on a typical weekday than it did in 2015, when the line ended in Pasadena rather than Azusa.

The Expo Line, meanwhile, is quickly becoming one of Metro’s most ridden transit routes. Since its extension to Santa Monica was completed, ridership on the line has nearly doubled, and it now carries more than 60,000 daily passengers. It was the only one of the agency’s train lines that did not lose riders in 2018.

While the Expo and Gold lines have added riders in recent years, Metro customers have abandoned the older Blue and Green lines at startling rates.

On a typical weekday in 2018, the Green Line carried nearly 15,000 fewer riders than in 2012. (Ridership on the line was probably affected by the nine-week closure of five stations at the beginning of 2018, but 2017 ridership numbers weren’t much higher.)

The Blue Line, meanwhile, has lost more than 20,000 daily riders over the same time period. In 2018, passengers took 9 million fewer trips on the line than they did in 2012—a drop of more than 30 percent.

Ridership on the Blue Line is likely to dip further in 2019, as large segments of the line will be closed for most of the year.

Even the Red Line, which carries more people than any other transit route in Los Angeles, saw ridership decline by about 1.5 million trips in 2018, compared to 2017.

Metro isn’t the only U.S. transit agency shedding customers. Between 2016 and 2017, ridership declined in 31 of the nation’s 35 largest metropolitan areas, according to an analysis by TransitCenter published in the Washington Post.

That trend is driven by an array of factors, and it’s important to note that the recent decline follows more than a decade of ridership growth in most American cities.

A UCLA study released last year supports the argument that an increase in car ownership has been a key factor affecting transit ridership in LA. Its authors found that, between 2000 and 2015, Los Angeles residents purchased four times as many vehicles than in the decade prior.

“Transit ridership [in Southern California],” its authors conclude, “has long depended on a sizable minority of people who did not, largely for economic reasons, have access to cars. After 2000, many of these people acquired cars, and it should not surprise us that they started riding transit less.”

Still, Los Angeles has lost a greater share of riders over the last decade than most of its big-city counterparts, while at the same time spending enormously on new bus and rail infrastructure.

With billions of dollars now set aside for more rail and bus lines throughout the LA region, Metro will need to reverse these ridership trends to ensure that investment pays off.

The agency plans to address falling bus ridership through an extensive reworking of its bus network, set to take effect in 2020.

Bolstering rail ridership should get easier as more routes and stations open, bringing new passengers into the fold. To counteract rider loss on older lines, Sotero says that improving the customer experience will be key.

Metro’s ability to do that will be put to the test later this year, when the Blue Line reopens with a host of updates, including revamped stations with interactive trip planners. The $350 million New Blue project will also replace the light rail train’s track and electric cable, ensuring a smoother—and hopefully quicker—ride.

Metro expects the improvements to shave 10 minutes off an end-to-end journey on the rail route.