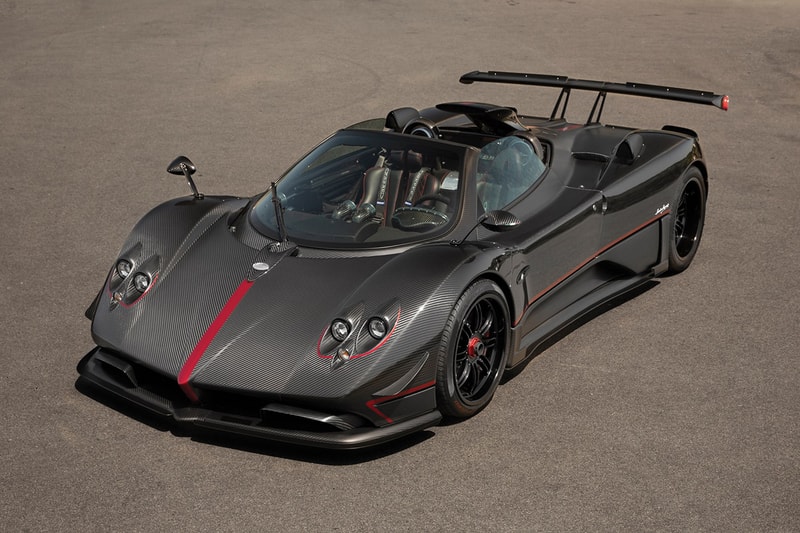 A one-of-one 2017 Pagani Zonda Aether based on the supercar’s Roadster variant has been listed for auction with RM Sotheby’s.

The V12 roofless supercar is particularly special because, as Zonda‘s come few and far between as is, the Aether is a one-off manual gearbox edition and a fully exposed carbon fiber body. The 7.3-liter engine comes from AMG and produces 760 BHP, which has been paired to a purist’s dream set up — a six-speed manual and rear-wheel drive.

Despite its roofless appearance, the Zonda Aether comes fitted with a large air-sucking roof scoop that feeds air into the engine. Additional air scoops can be found towards the rear above the wheel arches, while a huge fixed rear wing has been added to push the car into the ground at speed. Pagani accented the car with matte and gloss carbon fiber highlights throughout and finished the rare edition with a set of black and red matte rims. Red has been used to detail the car’s angular lines, pinstriping the nose, front fenders and along the side skirts, as well as around the headlights.

On the inside, the Zonda Aether is treated to Pagani’s typical attention to detail as it sports a set of intricate dials, quilted leather seats and carbon fiber trimming throughout. RM Sotheby’s is offering the Pagani Zonda Aether at an auction following the Formula One race in Abu Dhabi, where it is expected to fetch between $4.5m USD and $5.5m USD.

#NEWS: We’ve awakened the beast! The latest entry for our first-ever auction in the Middle East, held in partnership with @f1 and set for 30 November in #AbuDhabi, is the awe-inspiring 2017 #Pagani #Zonda Aether! . Though the Zonda was discontinued from production in 2012, Pagani has continued to unveil one-off special editions of the legendary hypercar, with this Zonda Aether roadster being one of the final and most potent examples yet. Beneath the car’s exposed carbon-fibre body sits a devilishly powerful 7.3-litre V-12 producing 760 bhp and mated to a six-speed manual gearbox. . The Aether’s striking exterior features a mix of matte and gloss carbon fiber with contrasting red accents, a massive rear wing, black wheels, a rear diffuser, alongside additional bespoke features. . In the age of hybrid hypercars, the Zonda offers an incredible analogue driving experience, and the Aether is one of the finest specs built. Offered from its original owner, the Aether is the first Zonda to be offered at auction in nearly seven years! . For more info on the Abu Dhabi sale and to register to bid, visit RMSothebys.com/AD19.