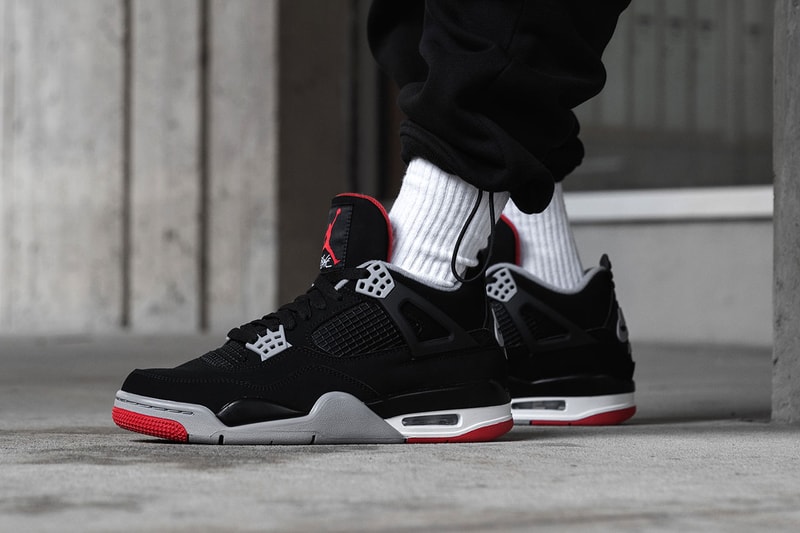 Following the official imagery from Nike, we now have an on-foot look at the highly-anticipated Air Jordan 4 Retro OG "Bred." For the first time since 2012, sneakerheads will have an opportunity to get their hands on the proper Air Jordan 4 "Bred," complete with plenty of accurate details.

Celebrating the 30th anniversary of the Air Jordan 4, Jordan Brand has taken care to recreate the "Bred" colorway as they first appeared on Michael Jordan during 1989’s NBA Playoff game. Whereas the 2012 editions lacked features, the forthcoming drop retains important touches, like the Nike Air heel branding that was removed from the model in the ’90s.

Black nubuck uppers match the mesh and plastic cages, with grey accents and sockliners offering a subtle contrast to the muted colorway. The midsole breaks up the dark upper with panels of red, grey and white, ensuring the design’s enduring versatility. A classic Jordan "FLIGHT" patch on the tongue complements the stenciled patch on the opposite side, complemented by a red "NIKE" logo and Swoosh embedded in the outsole.

Keep an eye Nike’s SNKRS app for the sneakers to drop on May 4 with a $200 USD price tag.

@hypebeastkicks: Releasing on May 4 for $200 USD, here’s a look at the Air Jordan 4 “Bred” on feet. Will you cop or drop? Photos: HYPEBEAST