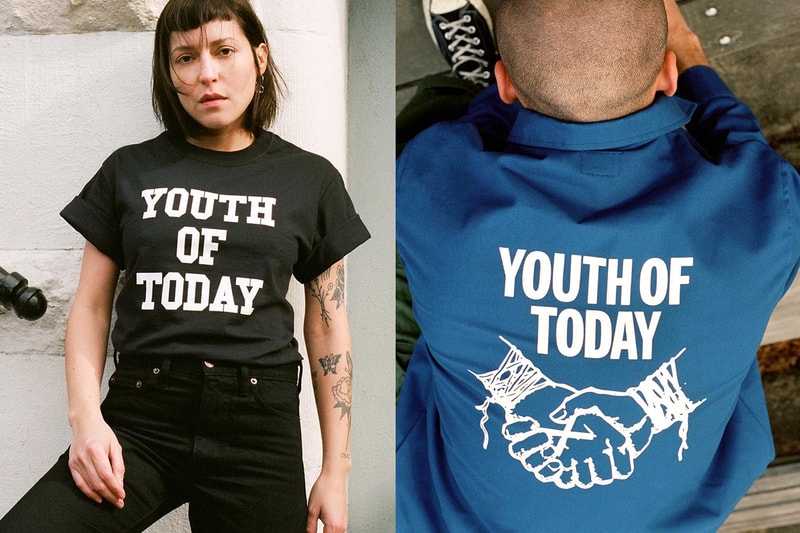 New York-based streetwear imprint NOAH has officially teased its collaborative capsule collection alongside legendary hardcore punk band Youth of Today. The straight edge and vegetarian lifestyle-pushing band from Connecticut makes for a fitting collaboration alongside the clothing and lifestyle brand.

Youth of Today flew onto the scene in 1985 with their raging Can’t Close My Eyes EP, pushing ideals surrounding Krishnacore that upheld principles of anti-drug use and further condemned illicit behavior. Now the group has made its way into the realm of clothing – finding themselves collaborating with Brendon Babenzien’s label that often associates with positive and alternative lifestyles.

In the recently teased depiction of the upcoming collab, we can see various graphic-heavy pieces including T-shirts in various colors – the front toting the bands name in all-capitalized block lettering, with various pictures of the group in action as well as quotes marking the back. The other teased piece is a workwear styled jacket with more graphics emblazoned on the rear.

Last year, NOAH worked on a limited capsule collection for the Anti Nazi League, and in late 2017 worked alongside English 80s rock band The Cure for a small collection of tees, hoodies and jackets.

You can take a peek at the upcoming release above and if you’re interested in picking up a piece, the collection will be dropping on March 14 via NOAH’s web store, as well as Dover Street Market locations in LA, London and the DSML webstore. NOAH’s flagship in Tokyo will see the collection on Saturday, March 16.

For more fashion news, don’t miss our look at shopping with Lil Yachty & Bajowoo of 99%IS.

NOAH x Youth of Today Thursday 3/14 – Please don’t expect too much from me, I may not turn out how you want me to be. I’m sorry if I let you down, But I must decide where my future’s bound. CHORUS: Why don’t you just slacken up. (OFF MY BACK!) Your expectations are too much! (OFF MY BACK!) Instead of just letting me be, (OFF MY BACK!) You’ve got your goals set for me. I wish you could really be, happy with the real me.