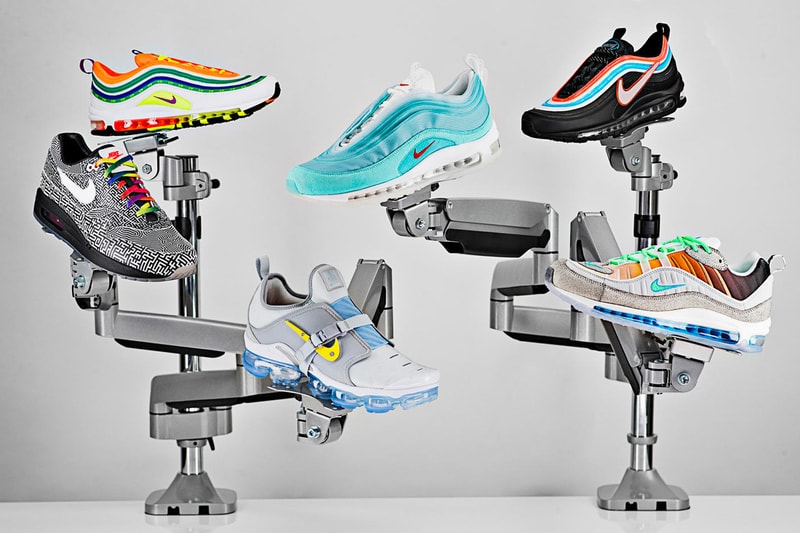 After revealing the results of the Nike: On Air sneaker design contest in May last year, the Swoosh brand has now unveiled the six, prize-winning pairs, each representing the city of local designers from New York, Seoul, Tokyo, London, Paris and Shanghai.

Starting from Gabrielle Serrano’s Air Max 98 "La Mezcla", the iteration celebrates the racial diversity in New York City, shading the uppers with a range of skin complexions and also embellishing the insole with a collage of flags from around the world. Jasmine Lasode has an anecdotal take on the theme of the Air Max 97 "London Summer of Love", alluding to her first date on Primerose Hill whereas the vibrant tones represent the lively summertime in London. Taking inspiration from photos of a building under construction, Lou Matheron’s Air VaporMax Plus "Paris Works in Progress" incorporates an industrial midfoot strap and a Swoosh motif screwed on to the lateral side.

Moving to the Asian cities, Cash Ru’s Air Max 97 "SH Kaleidoscope" creates an illusory effect by overlapping translucent side overlays and heel tabs to mimic the multilayered clouds in the Shanghai Sky. Gwang Shin’s Air Max 97 "Neon Seoul"contrasts the matte black uppers with eye-catching colors of the South Korean flag and opts for a reflective material to dress the Nike branding. Finishing off the collection of unorthodox designs is Yuta Takuman’s Nike Air Max 1 "Tokyo Maze," where a black-and-white labyrinth pattern blankets the uppers; pertaining to the complexity of Tokyo’s subway system. This shoe is finished off with rainbow laces.

The "On Air" collection is expected to be released this April, and will be found on nike.com. Stay tuned for more details.