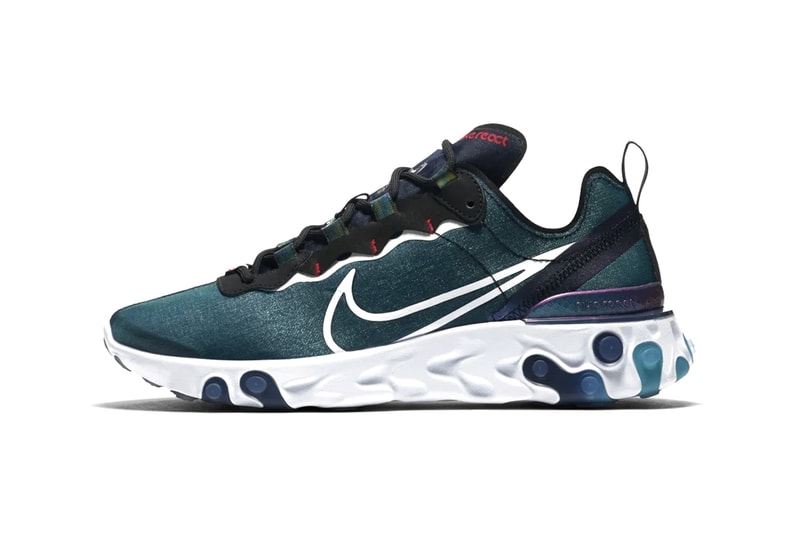 Nike is releasing two limited-edition iridescent-tinged takes on its React Element 55 in Chinese regions later this week. One men’s and one women’s sneaker make up the "Magpie" collection. The capsule takes inspiration from the bird’s natural iridescent colors in its feathers, as well as Tanabata — the traditional Japanese Star Festival that draws from the Chinese Qixi Festival to celebrate the meeting of the deities Orihime and Hikoboshi.

The inside of the tongue has a place that can be used to leave a message to detail the shoe’s recipient, giver, delivery date and location. A magpie motif in red is etched into the rear heel tab of both shoes on alternating sides, with a mini-Swoosh adorning the other.

Nike also added a magpie on different sides of the shoe for men and women to honor the love between Zhinü and Niulang, a mythical story in the Qixi Festival. In this story, a flock of magpies would form a bridge to reunite the lovers for one day.

The men’s React Element 55 features a dark iridescent green-blue textile upper with a white printed Swoosh and technical sole unit contrasting the shoe’s bold upper. On the rear, an iridescent heel clip and tab have been added, while the vamp sees iridescent lace loops and symbolic Tanabata designs on the tongue.

The women’s pair is finished in any shiny icy white colorway featuring black Swoosh detailing, iridescent heel clips and colorful segments on the white sole unit. Both pairs release online at 2 AM CST on August 3 — around 2 PM ET time — for ¥899 Yuan (approx. $130 USD).

In other news, Nike has served up a deconstructed "Psychic Blue" Air Max Plus.