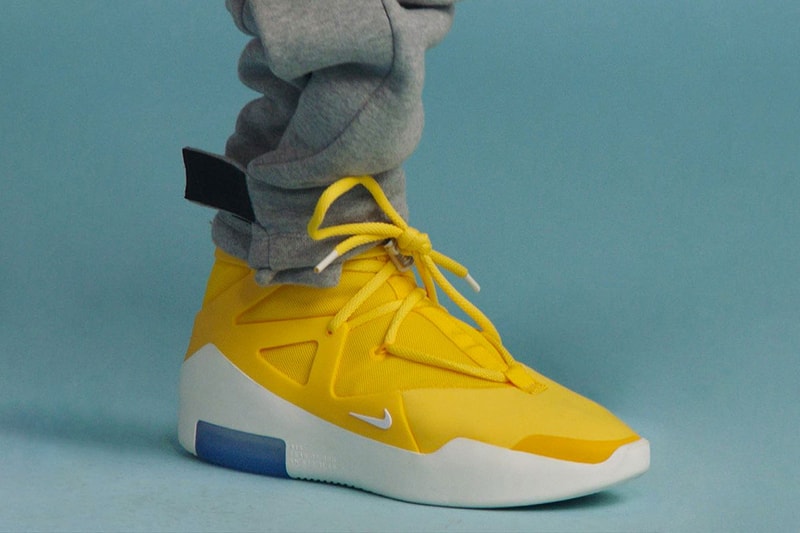 First seen on both Coolrain’s Jerry Lorenzo figurine and in an exclusive preview, the "Amarillo" colorway of Jerry Lorenzo‘s signature Nike Air Fear of God 1 may yet see the light of day. Naturally, no official release date has emerged, but sneaker leak experts @py_rates_ have hinted that fans may be in for a treat in the coming months.

Last seen in "Light Bone/Black," the tall basketball sneaker isn’t Lorenzo’s only Nike collaboration, but it did prove to be a hit among fans, with resale prices skyrocketing soon after selling out at launch. The "Amarillo" colorway is the most colorful iteration of the muted sneaker to date, with a bright yellow upper and matching laces complemented by a pale white midsole. According to @py_rates_, those looking to cop are going to have to wait until summer 2019, for the usual retail price of $350.

Most recently, an as-yet-unseen Nike moccasin was recently spotted on the feet of Lorenzo himself.

*LEAK ALERT*: Whilst we wait for @JERRYlorenzo to restock the @Nike Air @fearofgod 1s, we can confirm that the Amarillo pair he wore late last year will be dropping this summer. Will you be looking to cop a pair? Let us know. #NoMoreSecrets ? Mock up by @oscars_chaotic_mind