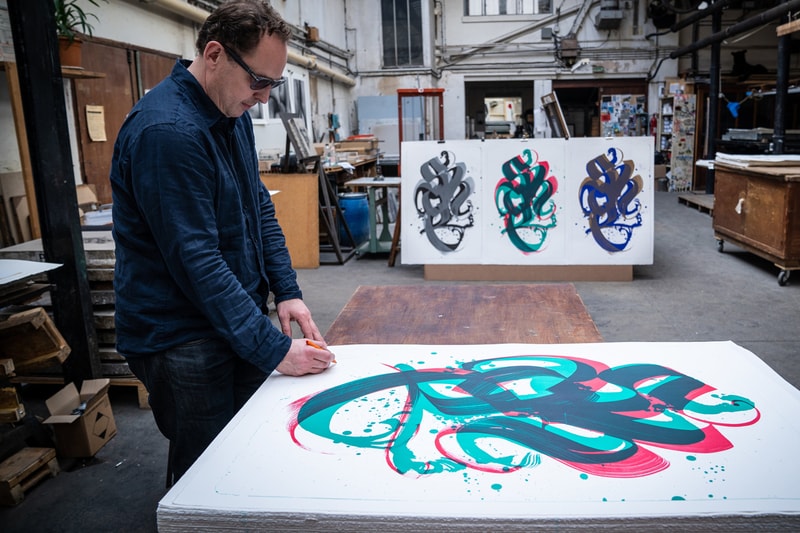 Niels Shoe Meulman is widely-recognized as being one of Amsterdam’s graffiti pioneers. Throughout the 1980s, Meulman also worked alongside Keith Haring, Dondi White, and Rammellzee. He coined the term "Calligraffiti" to describe his gestural artworks, expressing that "a word is an image and writing is painting," he expressed in a statement.

For his latest effort, Meulman teamed up with Paris-based Print Them on All on signed and numbered lithographs entitled Unambidextrous Shoe. The series consists of three hand-cut editions (43.70 x 30.32 inches) with each option portraying the same original artwork.

“I wanted to do calligraffiti which is my signature style, in reverse, but that’s impossible because my right hand is so used to go in a way," said Meulman of the creative process. “I decided to do one with the left hand, which is the ‘Shoe’ calligraphy, and then one with the right hand to show the difference between 30 years of practice and no practice at all. And here is the title ‘Unambidextrous Shoe.’”

The Unambidextrous Shoe editions will release on May 9 at 6 p.m. CEST on Print Them All’s website. Pricing starts at $468 USD.

Last month in Paris, I did a lithograph on stone called ‘Unambidextrous Shoe’. The three different color versions will drop tomorrow, May 9th 2019 at 06:00PM CEST, exclusively on @printthemall Because the process of stone lithography demands of the artist to create an image in reverse (mirrored), I decided to paint in my signature Calligraffiti style, but with my left hand. It felt like I was doing this for the first time… a very strange sensation. So, the first layer is very sloppy, done with the left hand. The second layer is a ‘shoe’ done with the right hand, printed in a transparent ink so you can choose which one you want to focus on. It ties in very well with the ongoing theme of opposites and duality, which you can find in a lot of my work.