On Friday, May 31, the six-part adaptation of Neil Gaiman and Terry Pratchett’s 1990 bestseller Good Omens: The Nice and Accurate Prophecies of Agnes Nutter, Witch hits Amazon, and Gaiman’s fans are working through nearly three decades of pent-up anticipation.

In the apocalyptic comedy, the angel Aziraphale (Michael Sheen) and demon Crowley (David Tennant) join forces in earth’s final days to stop the forces of heaven and hell from pulling off the Armageddon they’ve been looking forward to for 6,000 years. Leading the heavenly horde is Jon Hamm’s archangel Gabriel.

We got a chance to talk to Gaiman—who pulls double duty as the project’s writer and showrunner—about creating the eagerly anticipated miniseries.

What made you think of Jon Hamm as Gabriel?

I’ve known Jon socially for maybe a decade, and liked him enormously. He had confided after knowing me for a couple of years that that he’d been a huge fan of Good Omens and of [Gaiman’s 2001 novel] American Gods. And I thought, “Well I need someone for Gabriel who is tall, powerful, good-looking, and is everybody’s worst boss, and he’d be fabulous.” So I just sent him an email saying, “Jon, would you do this?” and explaining that it’s not in the book but this is how it would work. I got back a one-word email from him. It just said, “Yes. –Hamm,” which is how he signs his emails.

You also cast Frances McDormand as the voice of God, who narrates the story. Why did you like her for the part?

I knew I wanted an American voice. I knew I wanted a female voice, and I was trying to figure out who I wanted because Whoopie Goldberg’s already been the voice of God and the voice of death so I thought, “That’s probably not right.” So I was trying to figure it out and on the way back to America. I had just watched Three Billboards and my head was filled with Frances McDormand. About a day later she sent me an email about something completely different out of nowhere. I wrote back and said, “Would you like to be God?” She said it would confirm something her family already suspected.

You and Terry had literally been signing copies of the book for 25 years when he died in 2015. What worried you the most about adapting it for a screen?

Did it get emotional for you?

Yeah, it was awful. It was a matter of, you know, Terry had asked me to write the thing for him the year before he died. He wrote me an email saying, “I want to be able to see this, and you’re the only person out there who has the same understanding of and passion for the old girl that I do. So you have to do it, and I want to watch it.” And then he died. We thought he’d have a lot of time.

And then I was at his funeral, and I came home from his funeral, and I started writing episode one. And it was really hard. Nothing seemed funny. I remember that. But it also felt like a very good way to go head-on into the grief for my friend, and a way to get really determined. I was writing this for Terry. I was writing a Good Omens that Terry would want to see, and that became huge for me. And that, in many ways is what kept me going, you know, whenever it became hard. And the thing that kept me going, was just, “I’m doing it for Terry. This is the thing he would’ve wanted.”

What do you think he would have liked about this version?

I wrote [FRANCES McDormand] and said, “Would you like to be God?” She said it would confirm something her family already suspected.

Fans of the novel will notice some missing elements, like the British motorcycle gang who try to ride with the Four Horsemen of the Apocalypse.

The other motorcycle gang. We cast them. They were fantastic. They were in the original script. But then we were probably two, three weeks out from shooting and onto a third read-through when we were informed that we were 1.5 million over budget, and we’d have to trim. And they went. They went because they were probably a week’s shooting. And it was the extent of shooting where we would have to close off roads, there were stunts, there was a whole thing, and it was like, “You know, we can lose that.” And it made me sad, but we lost them. 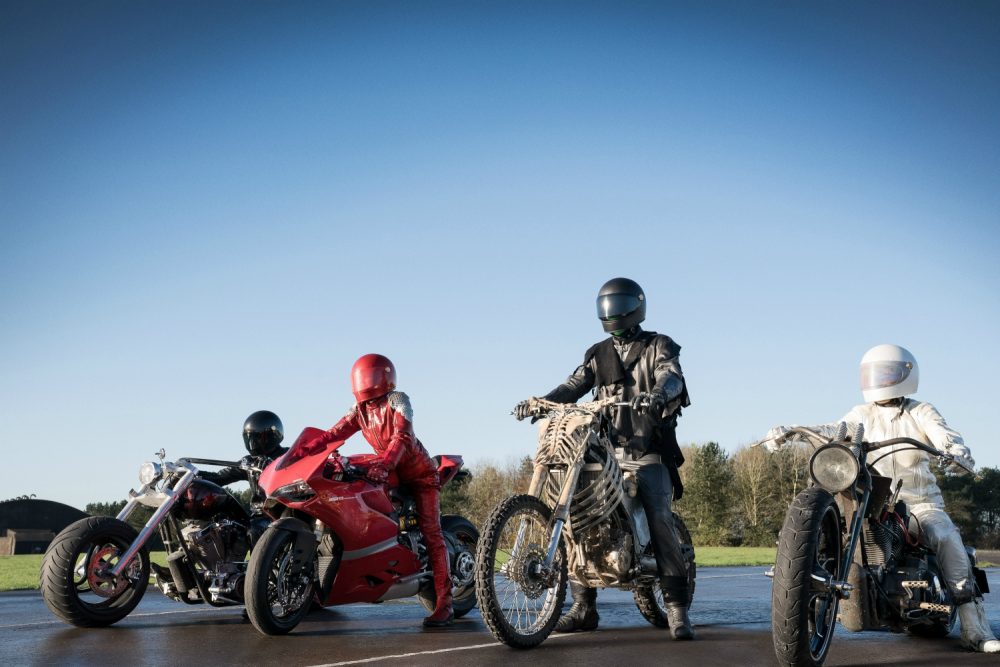 These days, goofing about Satan and witches and the end of the world is part of the zeitgeist, but it was hardly a thing when you guys wrote the book. How did you come up with the idea?

I think the nice thing about Terry and me is we were both, I guess one can say this with hindsight, we were both ahead of the zeitgeist. And the journalists today are why it is that my stuff is now ubiquitous, and how there could be Lucifer and How to Talk to Girls at Parties and American Gods and, now, Good Omens—and that it all happened at the same time. Maybe I was a little bit ahead. I think there’s probably a certain amount of truth to that.

But, also, the audience is now here. I think you don’t have to explain so much to a baffled audience of elderly white men. You don’t have to ask their permission to do things now. The idea that what once was genre is now mainstream, is the truth.

Which Pratchett novel would you most like to see as a movie?

Probably Monstrous Regiment. I’d love to see that done as a film. I think you could do—especially in these #MeToo-ish, #TimesUp kind of days—you could make some really strong points, and it’s such a powerful novel anyway. I think that would be amazing.

How did you find a child actor who could pull off playing Adam, the Antichrist.

It came down to the audition. We had two contenders for Adam. One of them was Sam [Taylor Buck], who got the part, and one of them was another terrific kid who didn’t. And the other kid who didn’t was actually much funnier than Sam. Every joke of his landed, and landed beautifully. But when he got angry, it was just a shouting 11-year-old. And then Sam, some jokes landed and some jokes didn’t, but when he got angry everybody in the room was terrified. There was something about him that was utterly convincing. He was for real. And I’m like, actually, I think people will believe that this angelic-looking child is indeed the Antichrist.

What are you watching these days?

I would honestly find the friend with the best, biggest television, and the best, biggest sound system and I would go to their place. Because Good Omens as seen on your phone, you’re going to miss so many things. There are things you are going to not quite see. Somebody from Amazon was telling me that she’d seen Good Omens several times on a desktop computer-sized television and then got to see it at Cinespia at the Hollywood [Forever] Cemetery, and it was the first time she discovered that all of our nuns have moles or facial hair, and she was finding jokes and things that she’d never experienced before because she could see it a hundred feet high on the walls of the cemetery. So if you can’t find a cemetery that is projecting it, find your friend with the biggest TV.

RELATED: Scene It Before: The Draper House from Mad Men