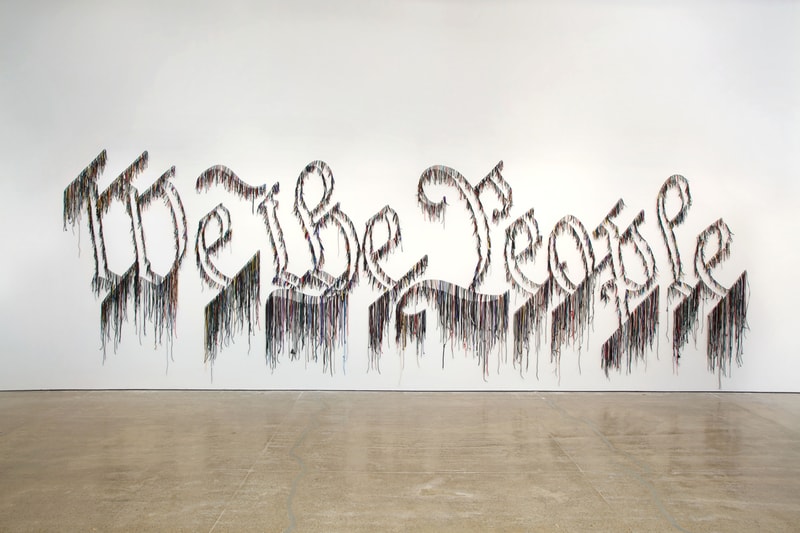 Jamaica-born, Harlem-based artist Nari Ward champions a creative practice that is both unconventional and commendable. Since the early 1990s, Ward has been scavenging dumped articles throughout the streets of New York City to create dynamic multimedia artworks spanning sculptures, paintings, and installations. Plastic bottles, fire hoses, strollers, and shoelaces are his choice of materials to create his socio-politically charged works that are now on display at a momentous survey in Manhattan’s New Museum called "We The People."

Over 30 works are found throughout the NYC institution, created by Ward between the years of 1992 and 2018. The artist’s earliest works were in reaction to the AIDS pandemic and crack cocaine crisis that ran rampant in New York in the ’90s. More recently, Ward has been creating works that address contemporary issues on both a social and national level such as "the profound changes gentrification has brought to Harlem and the increasingly fractured state of democracy in the United States," said the museum in a statement. The centerpiece of the show is Ward’s giant We the People (2011) mural made of colorful shoelaces.

View a selection of works in the slideshow above. "We The People," is now on view until May 26. In other notable exhibitions, Fondation Louis Vuitton is gearing up to display a collection of rare artworks by Vincent Van Gogh, Yayoi Kusama, and more iconic artists.