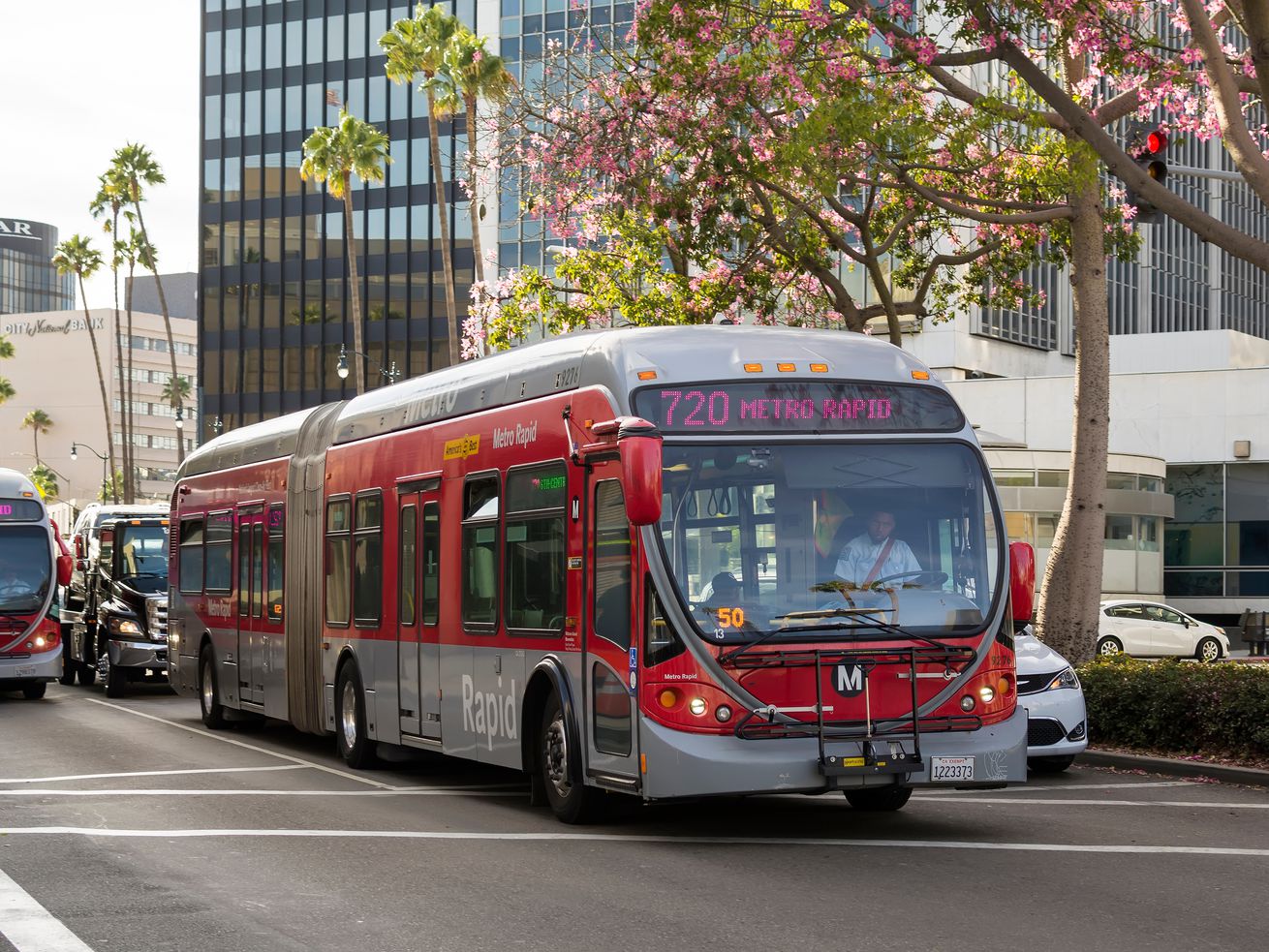 Aiming to speed up notoriously slow bus service on congested streets, Metro is planning to set aside bus-only travel lanes on some of its major routes.

Members of the Metro’s Board of Directors’ executive management committee will discuss on Thursday a bus-only pilot project that the agency aims to open by the end of the year.

The bus-only lane could be installed along segments of Van Nuys Boulevard in the San Fernando Valley, Florence Avenue in either South LA or Downey and Bell Gardens, Olympic Boulevard in central Los Angeles, or Martin Luther King Boulevard in South LA, according to a Metro presentation.

In March, Metro staffers revealed that the agency would cooperate with Los Angeles Mayor Eric Garcetti and the city’s transportation department to try the bus-only lane on a large street where buses now spend a lot of time idling in traffic.

“Buses are workhorses and we see them around the world working more efficiently than here,” said Garcetti in a Metro committee meeting in March.

The four thoroughfares meet a long list of criteria for the project, including the width of the street and the “severity of delay” now experienced by passengers. The segments where buses would travel in dedicated lanes would not be bus rapid transit projects, like the Valley’s Orange Line, which are generally more efficient, but costlier to construct.

Metro is now planning four BRT projects, as well as a temporary bus-only lane on Flower Street while the northern segment of the Blue Line is under construction.

The bus-only pilot project would be more similar to the dedicated bus lane installed five years ago on Wilshire Boulevard. Depending on which route is selected, it would extend between 3.3 miles and 8.8 miles. Metro expects the average rider would save from 1.7 minutes to 4.4 minutes per trip.

“From a customer experience, I want to see time savings of five to 10 minutes. If Metro wants to use those time savings to sell riders on this, zero to five minutes seems like kind of a wash to me.”

Directo suggests that using the time savings to ensure more frequent arrivals might be more appealing to riders. He says the “devil is in the implementation details” with a project like this, arguing that if the pilot isn’t successful, it could deter the agency from similar projects in the future.

Investing in Place found last year that average bus speeds across Metro’s system had declined 15 percent since 2013, as congestion has worsened throughout the LA region. During peak travel hours, buses show up late more than 20 percent of the time in every region served by the agency, according to recent performance reports.

A recent UCLA study suggested that installing bus-only lanes in dense areas where traffic regularly gets snarled can improve the experience of riders—and perhaps attract more of them.

A major exodus of bus riders from Metro’s system has driven a recent decline in the number of passengers the agency serves, despite massive investment in new rail infrastructure.

Directo agrees that giving buses priority over cars in areas that are frequently gridlocked should be a focus of Metro’s efforts, but he questions the criteria by which the agency selected streets to deploy the proposed bus-only lanes.

Rather than creating a list of bus routes that meet certain standards—like a minimum of three peak-hour travel lanes and a projected time savings significant enough to allow Metro to run fewer buses on the route—Directo says Metro could just ask riders which areas would be most improved with bus-only lanes.

“My gut response is to start with community-based organizations,” he says. “Talk to them about which areas have bus riders burdened with bad service that can be improved with an exclusive guideway.”

One reason the agency might be cautious about which routes it examines for the project: Bus-only lanes aren’t always popular with drivers. Neighbors were suspicious enough about the Wilshire Boulevard bus lane that it was broken up into pieces, avoiding part of Westwood and the city of Beverly Hills.

“This is only slightly less controversial than congestion pricing,” joked Garcetti in March.