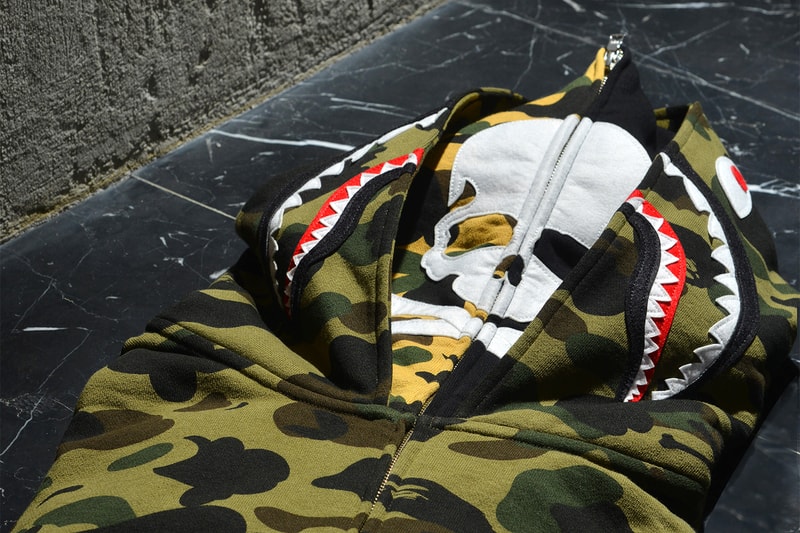 Mastermind vs A BATHING APE® are back for another round this 2019 Summer season. Like the first iteration of the "vs" line, Masaaki Homma‘s signature motifs are fused with BAPE’s conic graphics and prints.

Capitalizing on the idea of "never giving up on your dream until you die" the collection is a testament to how two Japanese creatives fought through the early years of when the future of their brands was uncertain, to now current times, where both BAPE and MMJ are regarded as two of the most recognized Japanese-rooted brands in the market — driven by passion.

This collection mainly sees dark hues (a brand attribute that’s largely inspired by Yohji Yamamoto) along with A Bathing Ape’s classic green camo pattern. The capsule includes striped L/S tees, polos, caps, shorts, and of course, BAPE’s must-have Shark Hoodie. While the items predominantly feature co-branding in the form of a skull-and-crossbones logo next to an Ape Head, the Shark Hoodie is by far the most standout piece — with a two-piece hood that zips up to reveal a large logo from both parties; the hoods can also be fastened together via buttons to prevent them from getting in your way.

A disguise that’s meant to standout. Enter the raffle NOW for a chance to purchase one of these Hong Kong exclusives. – Link in bio. Registration closes on MAR 29 at 10am GMT+8. – #mastermindjapan#mastermindworld#bape#bapejapan#mastermindvsabathingape