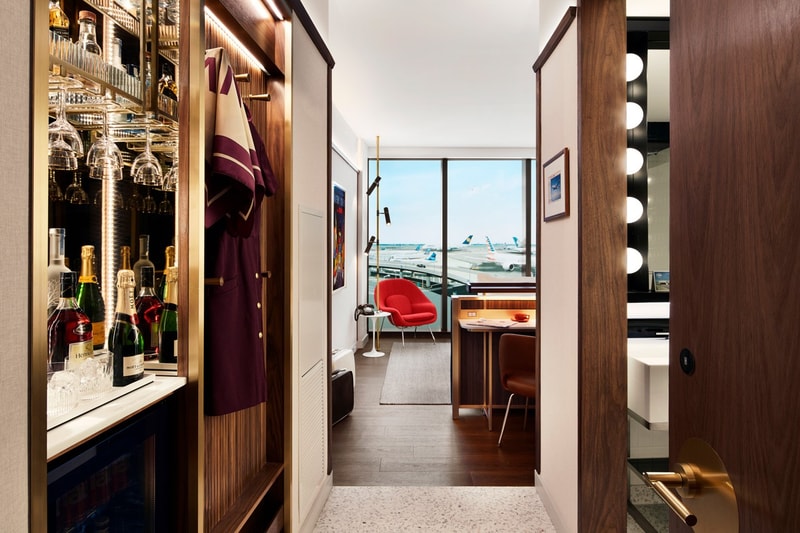 Following up on the debut of a retro-inspired capsule, the TWA Hotel has officially opened at New York‘s John F. Kennedy International Airport. Earlier this week, thousands of attendees were at the site to take part in the ribbon-cutting celebration. Additionally, a surprise flash mob took place in the newly restored Trans World Airlines terminal — a well-known city gem that originally debuted in 1962.

In total, the restoration project which includes the refurbished terminal and hotel required more than 22 government agencies and 170 architecture and design firms to construct. Notable sections within the 50,000-square-foot events center include the Paris Café by global chef Jean-Georges and the world’s largest hotel gym, coming in at 10,000 square feet. The expansive hotel is home to 512 soundproof guest rooms equipped with retro-inspired interior decor. The furnishings are a nod to the original Jet Age influence which previously reigned supreme in the vintage terminal.

If you get a chance to visit, you’ll also be able to check out a Shinola custom watch bar and leather goods store and a Warby Parker Pencil Room. Another attraction includes authentic TWA uniforms by Balmain, Valentino and Stan Herman. This is a part of a larger museum exhibition on TWA, the Jet Age and midcentury modern design by the New-York Historical Society.

Rooms at the TWA Hotel start at $139 USD and can be booked at TWA’s official website.

In case you missed it, check out the top Instagram-friendly hotels in New York City.