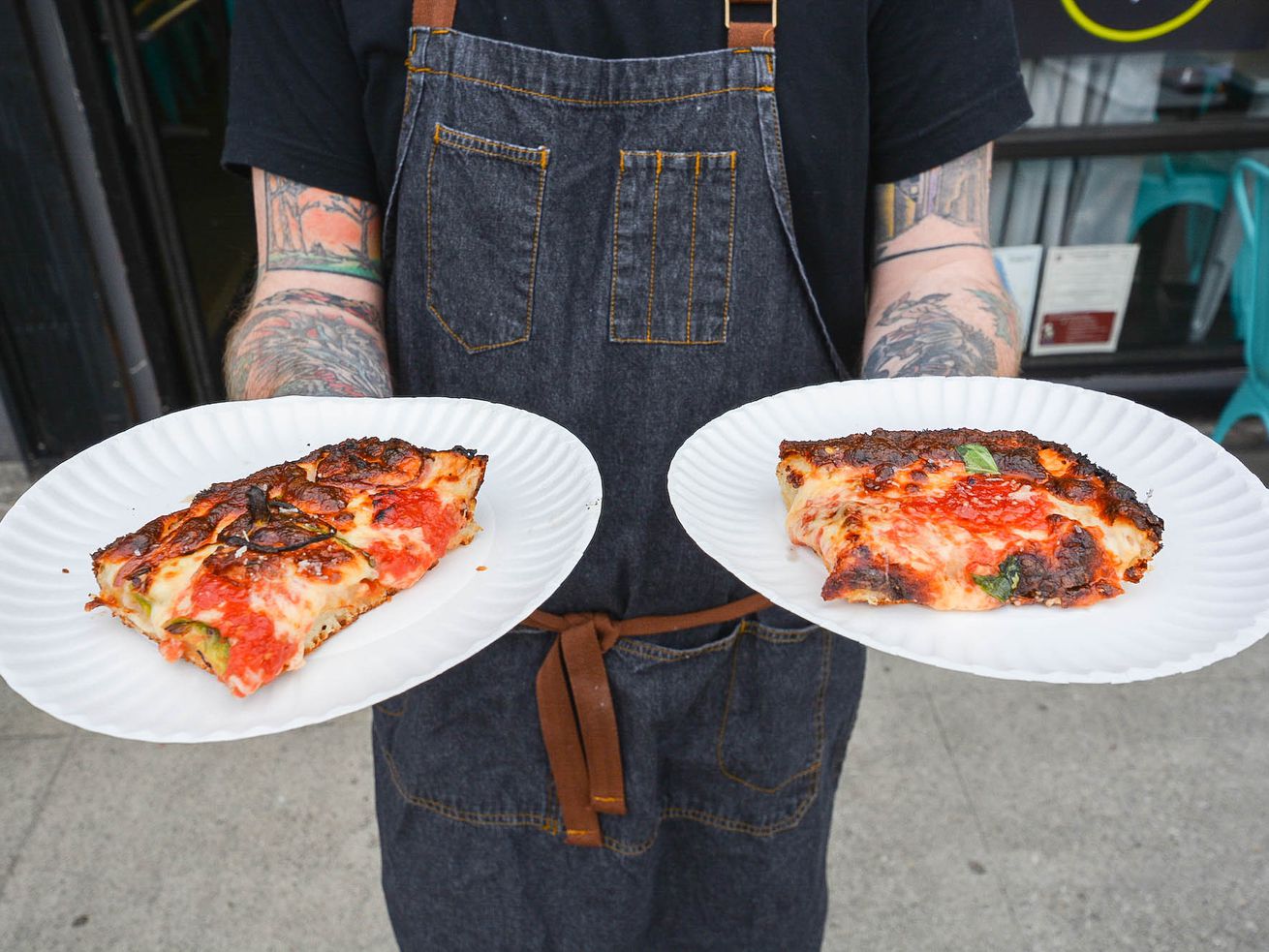 It’s not easy to stand out in a crowded Los Angeles pizza field. That’s particularly true on Fairfax, home to growing behemoth Jon & Vinny’s as well as everyday standards like Prime Pizza and the recently-returned Pitfire Pizza. But further south in the congested stretch of Fairfax known as Little Ethiopia, Kyle Lambert is certainly trying.

Lambert’s first big jump into the restaurant world is Bootleg Pizza, so-named for its ad hoc evening setup inside Rockit Kitchen at 1066 S. Fairfax. The space does simple daytime fare (salads and sandwiches mostly) while doubling as a commissary space for upstart businesses in the back. Thursday, Friday, and Saturday nights, Lambert takes over from 7 p.m. to 9 p.m. to sling a few pies and a make a little bit of money. He’s just starting delivery this week too, a necessity given the rain and the low foot traffic in the area.

Most nights the outside is just a glow of brake lights as folks try to crawl their way to the freeway, but inside something very interesting is happening.

Bootleg Pizza’s sole offering, at the moment, is a beguiling sort of pan pizza that even Lambert struggles to correctly define. It’s a sourdough speciality with lots of spring and those crispy, crusty, sometimes cheesy blackened touchpoints, but it’s not quite as deep or edge-to-edge as a more traditional Detroit-style pie. There are elements of Sicilian and/or “grandma” pies involved as well, but Lambert says the real vision for what he’s doing comes from a farmers market in suburban New Jersey, and a place called (ironically enough for Los Angeles) Kate & Al’s.

“I tried to emulate them,” says Lambert while working in the back to sauce a few pies for a special off-night event. “It’s very similar to what I’m trying to do. Also tomato pies in Jersey, with the whole sauce on top thing.”

Indeed, the pies at Kate & Al’s are square, sturdy, and well-sauced, but — at least according to Lambert — still spring up nicely in the oven for a mix of crispy exterior and airy interior. He gives the pizzas a little more time in the conventional oven for maximum blistering at the edges, leading to big, shattery bites. It’s a simple formula that he tweaks in dozens of different ways, and can even skew from savory to sweet.

Unlike Neapolitan-style pies or other formats with a strict ethos, Lamber doesn’t feel the need to restrict his toppings, turning one night from baked chicken and cheese curds to pastrami and mustard. Those pies are at the edges of his menu, though, and rotate in and out on a whim because the best-sellers play the pizza hits, from spicy sausage and red onions to simple whole milk mozzarella, crushed tomatoes, and basil. At the moment Bootleg has only been baking about 16 whole pies a night from within their short two-hour window, either sold whole or by the slice, so Lambert can’t tinker around too much right now.

“Pretty much the only job I’ve ever had is pizza-related,” Lambert says. “Everything from making pizzas to delivering to washing dishes at the pizza shop.” He spent time up in San Francisco working the truck at Casey’s Pizza, but always knew he wanted to run something himself, especially if he could find and refine the Jersey flavors of home.

“I knew that I could make good pizza, and that other people have hustled their way into restaurants, so I said fuck it, let’s do it,” he says.

The “do it” part is Lambert, by himself in a corner of a crowded commissary, working dough and stretching it to fit tall, square steel pans. His wife Stephanie works the front counter for him after her shift at an advertising firm, and for now the system works. Sometimes families wander in for a couple of slices with their kids, and sometimes a phone order cleans out the night’s supply. For an upstart two-person company whose only advertising is an Instagram page and a sandwich board sign on a sidewalk, those are the good days.

“Long term, I’m just going to take this as far as I can,” says Lambert. “Short term? I’m here on Fairfax.” The addition of delivery should help, but Lambert is also a realist. This is the earliest part of the bell curve, when places like his are all grit and determination and stamina. Bootleg Pizza continues to survive because Lambert, like most other chefs anywhere in the world, is chasing an idea of one dish, from one restaurant, from way back in his own personal journey. He’s chasing his own Kate & Al’s from Jersey, but from a storefront off deep Fairfax in LA’s Little Ethiopia neighborhood. There’s competition to the north and a freeway to the south, but for now, there’s nowhere else that Stephanie, Kyle, and Bootleg Pizza would rather be.

Bootleg Pizza is available Thursday, Friday, and Saturday nights from 7 p.m. to 9 p.m. at 1066 S. Fairfax Avenue, with some limited delivery as well.